Theories are not extracted from history. On the contrary, theories are needed in order to interpret history. Economic phenomena are ordered in accordance to definite laws. Understanding the relationships among economic variables is pivotal in assessing forthcoming risks and potential responses to those risks. The recurring economic structures help us comprehend fundamental relationships and, as Carl Menger taught us, economics is the study of universals apprehended in a realist manner. The economic and financial symptoms we observe are rooted in a fundamental cause called behavior of the objects involved. Unless we comprehend those objects we will keep fighting symptoms with steroids, recycling problems, and creating economic and financial crises.

The latest developments in Greece and China are simply points of reference to the reality discussed above. Specifically, and as I wrote a few weeks ago, the stock market bubble in China was destined to burst. The process of abstraction allows us to group together objects and make deductions from the premises of those facts. Hence, an investor can not only protect his assets but also profit from the trajectory of the things to come. Let’s take a look at the Chinese stock market. 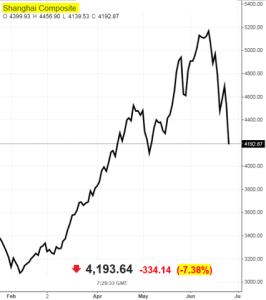 In the last two weeks it has lost almost 20% of its value. The reality is that the Chinese bubble in several sectors (and not just in real estate) creates volatility which in turn forces lopsided policies since central planning cannot allow individuality and freedom to generate new forms of responses that will allow catharsis to take place and capital to be cleansed and reborn. Here is a picture of the Chinese volatility as of last Friday. 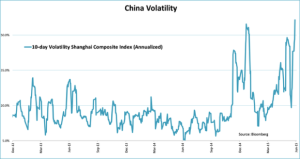 I anticipate that this volatility will continue and may be exacerbated given that the markets globally will be trying to find a point of stable disequilibrium in the weeks ahead, given the latest developments in Greece.

Speaking of Greece, and as pointed out before from these pages, we are dealing with a bankrupt nation which was bailed out for the sake of the Eurozone. The poker game played by both Greece and the troika did not address the fundamental issues and chose to ignore the facts. Therefore, the consequences at this point might be difficult to be predict. Most probably, Greece will default on its IMF loan on Tuesday and following that to its obligations to the ECB, EFSF, and other creditors and guarantors. The ECB would need to become the magician of all times in order to keep funding the cashless Greek banking sector, and would be forced to be recapitalized along with other central banks in the EU!

Greece may be forced to issue IOUs (promissory notes) which will become a parallel currency within the Eurozone. Politics may take over economics and while it is a fact that everything is politics, it is an equal fact that politics is not everything. Political expediency may force changes but that does not address the cause of a dysfunctional and lopsided EU mentality that ignores reality, natural laws, and economic relationships, while trying to absolve past economic sins and generate growth with plans that ignore the private sector and the entrepreneurial spirit that, if liberated, can advance growth, incomes, and jobs.

The original article was published by BlackSummit Financial Group.