The State of the Union Address Obama Should Deliver 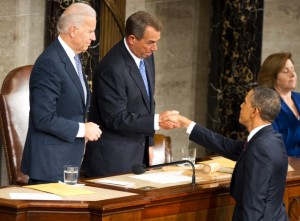 24 Jan 2012, Washington, DC, USA — United States President Barack Obama, right, shakes hands with the Speaker of the U.S. House John Boehner (Republican of Ohio), center, after the President delivered his State of the Union Address to a Joint Session of Congress in the U.S. Capitol in Washington, D.C., Tuesday, January 24, 2012. Looking on is U.S. Vice President Joseph Biden..Credit: Ron Sachs / CNP.(RESTRICTION: NO New York or New Jersey Newspapers or newspapers within a 75 mile radius of New York City) — Image by © Ron Sachs/CNP/Corbis

On the evening of January 28th, President Obama will deliver his State of the Union Address. No doubt he will present an agenda of increased political paternalism, with a focus on policies to “remedy” supposed economic inequality through government spending and higher taxes on the “rich,” while also insisting upon more government “job creation,” the coming “success” of ObamaCare, and the need to “save the planet” through more government regulation of business.

But what if the President offered, instead, an agenda for freedom rather than one of paternalism? What would the State of the Union address be like if he had an epiphany for defending individual liberty rather than more unrestricted government license over our lives?

The views expressed on AustrianCenter.com are not necessarily those of the Austrian Economics Center.
hayek_admin2014-01-28T09:11:07+01:00