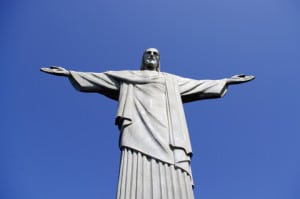 “The fact that Brazil has been chosen to host the World Cup in 2014 is a reason for us to have a great party and to be very happy,” said president Luiz Inácio Lula da Silva when Brazil was announced as host in October 2007. “Soccer is not only a sport for us. It’s more than that: Soccer for us is a passion, a national passion.” Brazilians agreed, with many dancing in the streets and launching fireworks.

Two years later, Rio de Janeiro was named as host for the 2016 Summer Olympics. The president wept tears of joy and repeatedly said, “Our hour has arrived.”
At the time, the World Cup and Olympics seemed like fantastic opportunities to showcase Brazil on the international stage. These opportunities matter in Brazil, perhaps more than elsewhere: Brazilians still carry chips on their shoulders over Charles de Gaulle’s alleged statement that “Brazil is not a serious country.”

But the aspirations for the World Cup this summer have failed to materialize. There is a palpable sense among most Brazilians of disillusionment and pessimism. They are expecting the World Cup to be a national humiliation. And average Brazilians have story after shocking story about the ways their government is repressing freedom to ensure the country is presentable during the big event.

For thousands of foreigners traveling to the World Cup, their first glimpse of Brazil will be Confins International Airport in Belo Horizonte. The city, the center of Brazil’s lucrative mining business, will host six matches.

Landing there this past spring, the airport gave me my first hint that something might be wrong with the World Cup preparations. It was supposed to have gotten a facelift. Unfortunately, it is nowhere near ready. Virtually all its ceilings are exposed. Scaffolding stands in most corners. Dust fills the air. The noise levels from construction work mean airline staff and passengers have to shout at each other during check-in.

Things did not improve much when I stepped outside. Construction has rerouted the normal traffic patterns, so just getting out of the parking lot presents a puzzling challenge. On Avenida Antonio Carlos, the main highway into Belo Horizonte, traffic lanes are clear on both sides, but the center is an enormous construction zone. The city is adding bus lanes that may not be ready for years to come.

Brazil is on course to throw the most expensive World Cup in history. Estimates of the total vary, but it will likely exceed $14 billion, more than the cost of the previous three World Cups combined.

Brazil decided to use 12 stadiums for the World Cup. South Africa only had 10 when it hosted in 2010. The future use of Brazil’s stadiums is shrouded in mystery. One, the Arena da Amazônia, has attracted particular scorn from Brazilians. It’s located deep in the Amazon jungle and there is no local top-flight soccer team to fill its 44,000 seats after the World Cup. Moreover, three workers died there in construction accidents. I traveled to Brasilia, the capital city, where I saw the magnificent Estadio Nacional, which seats 72,000. I asked my hosts if the local soccer team will use it after the World Cup. They laughed and said, “That’s the million dollar question.” The local team plays in the lower divisions and doesn’t attract more than a few thousand fans per match. Brasilia is an affluent city, so the residents can afford tickets to the occasional mega-concert, but that’s the only likely use for the stadium.

In preparation for the World Cup, Brazil also undertook massive infrastructure projects. Many will not be completed on time, and those that are ready could actually have a negative impact. “Large parts of these projects are bad for cities instead of good,” says Anthony Ling, a Brazilian architect, urbanist, and author of the blog Rendering Freedom. “The most obvious examples are urban overpasses. This is a very ‘modernist’ way of planning, which basically subsidizes individual car use using public funds and eminent domain. Overpasses also kill pedestrian activity around [them], which decreases the accessibility of public transportation.” He also says that some cities had their own plans for infrastructure works, but these were altered to suit the World Cup, thus killing their original efficiency.

Most Brazilian cities have areas that are chronically underdeveloped. Brazilians worry what foreigners will think when they visit and see slums and run-down buildings. “Americans have high standards. They will not be impressed by what they see here,” says Gianluca, a lawyer in Brasilia.

Tourists driving down Avenida Antonio Carlos on their way to a match in Belo Horizonte will probably never know that they are driving over former favelas. These slums used to crowd the much-narrower highway. Every city hosting World Cup matches used eminent domain to push through its infrastructure projects. But in many cases, cities didn’t even need to bother with that.

“There has been a lot of slum removal, which isn’t actually eminent domain because the residents don’t have property titles. Thus, they get little or no payment from the government for their houses,” says Ling. “Around 80–90 percent of favelas are on government land. They basically homesteaded that land, but they didn’t get their titles. It doesn’t matter if they’ve been there for a hundred years, the government can do whatever they want.”
Some estimates put the number of people removed from their homes because of the World Cup at around 250,000. Virtually all of them are desperately poor.
The removals drew very little public comment, and certainly very little outrage. Many Brazilians, particularly those on the right wing, even supported them. They see the residents of favelas as invaders who took land that was not theirs.

In addition, they see favelas as fortresses of crime. Many are more or less governed by local drug dealers. “Drug dealers don’t only use drugs as power. They control the total area,” says Rodrigo Constantino, an economist who writes for Veja, one of the Brazil’s leading magazines. “People have to pay drug dealers and the owners of favelas to use energy or to use television.” Thus, many Brazilians favor to efforts to end the drug dealers’ rule.
Over the past several years, Brazil’s government has run a program of “pacifying” favelas by sending elite police units in to retake them. More recently, as the World Cup loomed, the government resorted to even tougher tactics. The military has moved in to occupy several favelas in Rio de Janeiro and will stay there until the World Cup has ended. Many Brazilians are uneasy about this, but they feel it is necessary to control crime.

“I’m very concerned about abuse of police power, but it’s like a battlefield here,” says Constantino. “It’s like the U.S. government’s tactics in Iraq. You have to remember that they’re in Iraq and not New York City. The police enter a favela under heavy gunfire. It’s not like Copacabana. It’s a totally different environment for them to work there. Many policemen die each year in the war against drug dealers in favelas.”

Grant Grobbel is an American who has lived in Brazil off and on for 20 years. He believes the deployment of military troops against Brazilian citizens is normal in the context of Brazil’s history. “Brazil doesn’t have the same restrictions on the military coming in that the U.S. does,” he says. “Brazil has always had top-down control throughout its history. That opens things up for the military to come in as well.”

Cracking Down on Protests

The favelas are not the only places where the Brazilian government is cracking down. It’s also preparing to keep a lid on social unrest. It will spend roughly $85 million on security during the World Cup and deploy a security force of 170,000 police and private security contractors. There’s reason for concern: Last summer, massive anti-government demonstrations shook the country.

They started in June 2013 in Sao Paulo, when a small extreme leftist group protested an increase in bus fares. Soon the protests spread, and millions took to the streets to express a wide range of grievances. Many were unhappy at the public funds being spent on stadiums for the World Cup while Brazil’s hospitals and schools remain substandard.

The government was quick to promise reform, but nothing substantive materialized once the protests fizzled out. “The government became conscious that the people are dissatisfied, but I don’t think they are going to do anything,” says Alexandre Barros, a political risk consultant based in Brasilia.

There are no more large-scale marches, but a few disillusioned individuals are still trying to express their dissatisfaction with the status quo. “Now it’s turning a bit more sour. You get more fires being thrown out into the streets. People weren’t given a voice so their attitude is just to burn things,” Grobbel says.

The Black Bloc, a small group of mask-wearing leftist anarchists, has been drawing media attention. “They’ve been using the protests,” says Constantino. “They’re like a tiny minority in the protests, but a very organized one with guns and rocks and Molotov cocktails. They have been trying to make violent chaos.”

In February, a videographer named Santiago Andrade was killed by a rocket allegedly set off by protestors. This spurred members of Brazil’s congress to introduce a new anti-terrorism bill that would criminalize violent protests. “The problem is that some articles of the legislation are vague and open a dangerous possibility to criminalize almost every kind of protest against government,” says Bruno Garschagen of the Mises Institute in Brazil. “Ultimately, that legislation will increase the power of government over Brazilian society, especially against its adversaries.”

The bill’s sponsors had hoped to enact it before the World Cup. However, due to concerns over the vague wording, the bill has been delayed pending further congressional debates.

As part of their efforts to prevent new protests, the Brazilian police have been summoning people who marched last year to police stations for questioning. Juliano Tor