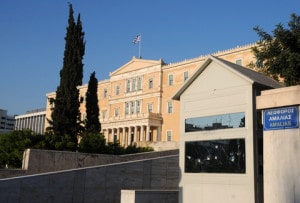 In ancient Greek mythology, Pandora’s Box was a container filled with evil. On May 25 Europeans went to the polls where they opened Pandora’s ballot box, which contained an evil long thought to be forgotten: a national socialist (Nazi) party.

The vote count revealed that three representatives of Greece’s Golden Dawn had been elected to the European Parliament. Many Europeans won’t draw the connection immediately, but soon these members of the most brutal, hateful, and bigoted political group the Parliament has seen in 35 years will be receiving tax-funded salaries.

Since its previous electoral success, of course, Golden Dawn has tried to hide its pro-Nazi past. But evidence of its worldview is abundant and irrefutable.

Golden Dawn’s rise from a tiny group of radical Hitler-sympathizers to the third largest party in Greece occurred when the Greek economy was collapsing. The origins of this crisis are well-known and well-documented: excessive borrowing, low productivity, corruption, and a profligate welfare state. At the height of the crisis the entire nation was angry; the people felt betrayed by their political elites. The Nazi party arose from the need to blame outsiders and to feel special.

Finding a scapegoat was easy for the formerly homogenous country. The notion that “the Greek people are troubled daily by the thousands of illegal immigrants, who steal our property, our jobs, they rape us, they kill us, and spread terror and filth everywhere,” as the currently jailed Golden Dawn press secretary, Christos Pappas, said during a newspaper interview, resonated with a large segment of the Greek public. (Pappas’s wife was a candidate for the European Parliament.) In short, immigrants have paid a high price for bad government policies.

The need to feel special, deeply ingrained in the Greek national identity primarily because of the land’s great history, was fully satisfied by the rise of conspiracy theories about everything from chemtrails, to global Zionist plots to eliminate Greek culture, to beliefs that the Orthodox Russian Brothers, led by Vladimir Putin, the only one who stands up to the anti-Greek West, would jump in and rescue Greece by providing the money required to avoid bankruptcy. Shortly after the European election results were announced, one of Golden Dawn’s rising stars stated during a Russia Today interview that “in our Europe, Russia is in the first position. Orthodox Russia, the first ally of Greece.”

This need for a scapegoat and to feel special is most likely why the Anti-Defamation League’s recent Index of Anti-Semitism identified Greece as the most anti-Semitic country outside North Africa and the Middle East.

In this political climate Golden Dawn rose from 0.3 percent of the vote in 2009 to approximately 7 percent in the 2012 national elections. For the last year many analysts thought that the prosecution of Golden Dawn members on charges of organized crime and the imprisonment of many of its elected leaders, including General Secretary Nikos Michaloliakos, would keep the party from further electoral success. But the May 18 municipal and gubernatorial elections and the May 25 European ones told a different story. Golden Dawn received 9.4 percent of the European parliamentary vote, enough to elect three members. Among them there are two former high-ranking army officers. The week before that, in Athens, the country’s capital and largest city, Golden Dawn’s municipal candidate and MP, Ilias Kassidiaris, who made global headlines when he slapped a female communist MP on live television, gathered 16 percent of the vote, securing him fourth place in a close election. Ilias Panagiotaros, Golden Dawn’s gubernatorial candidate in Attica, the region that includes Athens and its suburbs, won 11 percent and also finished fourth.

From these results it is safe to assume that Golden Dawn is no longer merely the beneficiary of a protest vote. The Greek electorate has been fully informed of the party’s Nazi affiliation, Holocaust denial, anti-immigrant slurs, and raw violence in the streets of Athens. We can now safely conclude that Greece has a viable, robust, and dangerous national socialist political force.

Any serious attempt to reverse this trend should avoid political persecution, unconstitutional prosecutions, and further efforts to pander to Golden Dawn voters. On the contrary, Greece needs a mature civil discourse on the evils of Nazism and extreme nationalism, recognizing that about 10 percent of Greeks consciously voted for a party of Hitler-sympathizers. The media should stop excluding Golden Dawn from news and talk shows, but instead should challenge and expose them. Furthermore, political parties, mainly from the right, including the governing New Democracy, should stop cultivating the dangerous anti-immigrant sentiment that is expanding all over Greece. Immigrants, after all, never harmed the Greek economy.

Considering that a driving force for a united Europe was precisely to prevent another rise of Nazism, it is ironic that in the birthplace of democracy, Greeks opened Pandora’s ballot box.

The views expressed on AustrianCenter.com are not necessarily those of the Austrian Economics Center.
hayek_admin2019-01-14T06:17:32+01:00