Carry Me Back to Old Virginia 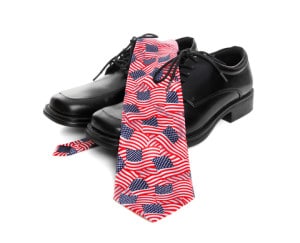 The claim by David Brat, an economics professor at Virginia’s Randolph-Macon College, that his victory in last Tuesday’s primary was because God intervened on his behalf, is obviously spurious. He won because 36,000 of the 65,000 people (13% of the electorate), or 55% of those who did vote, decided in his favor. Having read a reasonable amount of history, I feel comfortable in asserting that God does not take sides in secular matters. If anything, God must be shaking His (or Her) head in embarrassment at what He (or She) created: a bunch of boobs in Washington who have become increasingly isolated from those they are supposed to represent. Too many remain closeted with their lobbyists patrons and only emerge, like moths toward a flame, when microphones and cameras magically appear.

I have no idea whether Mr. Brat will make a good Representative, or even whether he is competent. I admit to an element of queasiness when someone claims their election victory was a manifestation of “God’s acting through the people,” or who once wrote that “government holds a monopoly on violence.” Mr. Brat was referring to, in regard to the latter, the fact that our government is empowered to enforce all laws, but one would have thought that such accusations would be reserved for groups like al Qaeda, Boko Haram and ISIS. On the other hand, Mr. Brat may be a perfectly sober and intelligent man; though why he seems upset with our nation being one that operates under the rule of law is beyond me. Granted, there are laws with which I disagree, but our Constitution provides ways of changing or amending laws, including passive resistance. I agree with him about the proliferation of crony capitalism and I respect his call for a simpler, more efficient tax code, one that removes special credits and exemptions.

A great deal of ink has been spilt on why Eric Cantor lost. He is blamed for favoring amnesty for illegal immigrants, particularly by talk-radio host Laura Ingraham and syndicated columnist Ann Coulter. The New York Post, somewhat waggishly, on “Page Six,” suggested “Cantor’s stunning defeat was blamed on spending too much time in the Hamptons.” It’s true that the Hamptons are a long way from Virginia’s 7th District, and they do provide “cottages” for a number of Wall Street bankers. It is said by many on the Left that Eric Cantor was done in by the Tea Party, but that seems specious as national Tea Party organizations provided very little in the way of support for Mr. Brat and gave him no money. (Mr. Cantor had a 25-1 money advantage.) One could argue that, as majority leader, Mr. Cantor’s duties as Majority Leader meant that he had to negotiate and compromise; so therefore did not adhere as close to the conservative wing of his Party as some might have liked. “Be afraid, be very afraid,” is the way John Dickerson of “Slate” put it,” a warning to Republicans on lessons to be learned from Cantor’s defeat: “Don’t fall out of favor with your activist base.”

Time will tell why Cantor lost, but I believe it has less to do with national politics, immigration or the Tea Party, and more to do with Mr. Cantor’s taking his seat for granted. Dickerson is right in his message that no officeholder should assume they are entitled to their seat. All elected officials should be responsible to the people they represent.

The Left, in particular, has made immigration a toxic issue, by conferring the term “xenophobic” on anyone who wants to tighten border security. In what to me seems willful permissiveness on the part of the Administration, thousands of immigrant children, some arriving alone, have recently entered our Country. Most have arrived from three Central American countries: El Salvador, Guatemala and Honduras. I use “willful” because the numbers are up this year by multiples over the last several years. Leaving them at bus stops in Phoenix and other cities, sometimes alone, was obviously designed to create pandemonium and resentment, and conveniently creates a situation Democrats can exploit. Exploiting children for political advantage is about as low as it gets. Peggy Noonan wrote on Friday, regarding President Obama: “Keeping immigration unresolved keeps part of his base energized and bright with grievance and drives Republicans to murder their own.”

Immigration should not be that difficult a policy. It should not be contentious. Nevertheless, politicians, especially those on the Left, take pleasure in exaggerating policy differences, rather than trying to find common ground. We are a nation of immigrants. They are the lifeblood of our economy – its aspirant and creative base. While there are a few who come for the freebies, most are here because they want to better their lives. The joy of being in America and a willingness to work hard are common characteristics of those new to our shores. Most thinking people want that flow to continue, recognizing that new blood is like recharging old batteries. Granted, there are millions of Americans without work, but many of the jobs taken by immigrants (particularly the illegals) are ones that most Americans would rather not do. At the same time, is it not also a responsibility of a free and sovereign people to protect borders? We cannot live in anarchy, anymore than we can live in isolation. Borders must be secured as a prelude to immigration reform. That only makes sense.

The most difficult question regarding immigration reform involves the 15 to 20 million illegals already here. But to resolve that question we should all agree on what we cannot do. We cannot grant them all immediate citizenship. And we cannot round them all up and ship them home. So, a middle ground must be found, some recognition that allows them to be productive parts of our society, contributing as taxpayers, but without the benefits of immediate citizenship.

But to return to the issue at hand; Eric Cantor served seven terms in Washington, rising to become House Majority Leader in January 2011. While he handily won his previous bids for re-election, his percentage margin of victory declined from 75.5% in 2004 to 58% in 2012. While an estimated $5 million was spent on his re-election, it was almost all spent on TV ads. In contrast, a little over $100,000 was spent by Mr. Brat. Despite what the New York Times would have us believe, money doesn’t buy all elections. The ads and fame provided name recognition for Mr. Cantor, but that didn’t impress voters who wanted to air grievances, or who simply wanted to see and meet their representative.

Washington is seductive. Its senior members in Congress wield great power. While the pay is high relative to average Americans, it is less than what people with their talents would earn in the private sector. Nevertheless, the job comes with many benefits, apart from the boost to one’s ego – generous expense accounts, the provision of staffs, lifetime healthcare and munificent pensions. Gerrymandering has meant that many who serve do so with little concern about re-election. Because these people have such power, they are sought by lobbyists, many of whom, because of the revolving door that is Washington, were once their compatriots.

Politics has become a career path. In many instances, it has become a family business. There are five House and/or Senate members who have been in office more than 40 years. There are another five who will have been in office forty years by the end of 2014. John Dingell (D-MI) has been in office since he succeeded his father in 1955 – before most Americans were born. Fourteen members of the current Congress have served more than 37 years. It is only natural that over so many years, relationships develop between lobbyists and members. Cronyism has bred the complexity that is embedded in our tax code, and in the regulations that guide our manufacturing, banking and service industries. It is easy for those in Congress, who live and work in this inbred cocoon of comfortable segregation, to forget that they serve at the discretion of the people.

Eric Cantor did not fit that mold. He will have served only seven terms – fourteen years; though, in my opinion, about as long as any one person should serve in such a job. His defeat came just a few days after his 51st birthday. Nevertheless, he exuded an aura of arrogance, not untypical of those who are surrounded by sycophants and who have grown accustomed to seeing their faces and their words in the media. Mr. Cantor spent more time than he should with those who provided his financing. That is the warning all incumbents should take away. Public office is not an entitlement. It is an opportunity (and a privilege) for service. Politicians should never forget they are servants of the public, and that the money they spend, whether on an office chair or a junket to China, is not theirs; it is the peoples’. Politicians serve two masters: the voters and those who finance them. But in truth, it is the voters who wield the bigger stick. Politicians are expected to use their judgment, but in such a way that it does not surprise those whom they represent. We, the electorate, must take on faith that candidates mean what they say, and say what they mean. If an office holder is true to his or her stated beliefs, there will be very few surprises. If not, he or she should get thrown out.

In defeat, Eric Cantor was gracious, as one would expect of a Virginia-born gentleman. He did not whine. He did not cast blame. He accepted defeat in the best American political tradition, and immediately made plans to resign his leadership position in the House, which he will do at the end of July. He will head home to Virginia in January. As for Mr. Brat, I reserve judgment until I understand his positions and see how he performs.

The views expressed on AustrianCenter.com are not necessarily those of the Austrian Economics Center.
hayek_admin2019-01-14T06:17:00+01:00