A Brief History of Cough Medicine 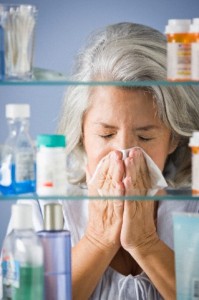 It’s a dangerous world, but fortunately the U.S. government regulates cough syrup. What is unfortunate, perhaps, is the regulations don’t quite do the trick.

Our story begins somewhere in my teen years. There was no Internet back then, so to occupy my time I did research. The research concerned finding what substances available over the counter could be taken to get high. I learned that DXM or dextromethorphan (known more commonly as Robitussin DM) could result in hallucinations.

It didn’t sound like the thing for me, but I relayed this information to my peers. The more idiotic among them promptly started guzzling Robitussin DM while listening to Nirvana. I hadn’t thought much about cough syrup in the intervening years (aside from when I had the flu) until hearing that rapper Lil’ Wayne was hospitalized for sippin’ “sizzurp,” which I’d later learned was prescription codeine cough syrup—promethazine.

In 1958, the FDA approved DXM for OTC use. This action was meant in part to combat codeine cough syrup abuse, according to Karch’s Pathology of Drug Abuse, fourth edition. Lil’ Wayne’s hospitalization and 736,000 Google search results for “sizzurp” give you a decent idea of the FDA’s success. [Editor’s note: The number jumped significantly after Justin Bieber was associated recently with sizzurp.] In fact, abuse seemed to be booming, even while it became harder for the average citizen to get codeine cough syrup. I wondered what lay in store for DXM, codeine’s hallucinatory replacement.

Unsurprisingly, I found that recently, in a moral panic, state legislation (SB514) had already been enacted to ban the sale of dextromethorphan to minors in California. Similar legislation was recently signed by governor Andrew Cuomo in New York. Presumably, the ordinary citizen will be subject to 15 minutes of paperwork and teens would need a parent’s permission to get antitussive DXM cough syrup rather than a cough syrup that is strictly an expectorant (i.e., a cough medicine that doesn’t do anything about coughing).

This incident is far from the only one where government intervention to make cold medicine safer winds up penalizing the populace without doing much of anything positive. The draconian paperwork and regulatory requirements are eerily reminiscent of the Combat Methamphetamine Epidemic Act (and several related state bills) and its de facto pseudoephedrine ban. That legislation was another example of the government acting to make our lives safer and protect us from cold medication we could maybe, possibly, get high from.

Initially, pseudoephedrine was banished to behind the counter, accessible only via procedures you’d expect for classified information, where all purchases and amounts of these purchases were carefully logged. This system was supposed to prevent methamphetamine manufacture. However, most large-scale production of methamphetamine currently takes place in Mexico, where these laws have no impact. Fast forward a year or two, and thanks to the “shake and bake” method (a potentially explosive method for making amphetamine in a soda bottle), large supplies of pseudoephedrine are no longer needed to manufacture methamphetamine. There is no reason why the manufacturers of an illicit substance would go back to large-scale (and easily confiscated) manufacturing in the states. Yet, the law is still on the books, and law-abiding citizens are still carefully watched, lest they have a sinus headache one day and then purchase too much Sudafed for their son before he goes off to church camp the next day.

Additionally, phenylephrine, which has gradually replaced pseudoephedrine in sinus medications, is less effective than pseudoephedrine. Things that work would only be replaced by things that work better if the market dictated outcomes. Instead we have cough syrup with reduced efficacy that makes kids just as high. As a bonus, it can make them hallucinate. We also received a law that replaced a sinus medication with a less effective one while simultaneously spurring a new, more dangerous method of creating methamphetamine and making a misdemeanor out of seeking sinus relief.

The views expressed on AustrianCenter.com are not necessarily those of the Austrian Economics Center.
hayek_admin2014-01-23T11:02:07+01:00