A Capture in Benghazi? 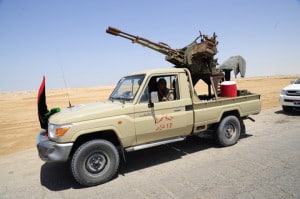 Contempt for the proletariat is nothing new among imperious politicians. But President Obama must think we are dumber than all get-out, when he haughtily proclaimed, as he did Tuesday: “It’s important for us to send a message to the world that when Americans are attacked, no matter how long it takes, we will find those responsible, and we will bring them to justice.” While it was good to see Ahmed Abu Khattala taken into custody, the timing of the arrest was politically auspicious.

Mr. Abu Khattala had given interviews to the New York Times, CNN, Fox News, CBS, Reuters and the Times of London. His first interviews were conducted within days of the attack – the first apparently with Elizabeth Palmer of CBS. All of these interviews were conducted in public places, with the exception of the one with Anthony Lloyd of the Times of London. That interview took place in his home over “tea and biscuits.” This is a man who, if he had been hiding, was doing so in plain sight. Despite his known leadership of the Benghazi branch of the terrorist group Ansar al-Sharia, the United States only charged Mr. Abu Khattala with having played a “significant” role in the attack on the Consulate last August 6th.

In response to a question as to why it took the military so long to get a man that the media had found quite easily, Pentagon spokesman John Kirby responded: “Terrorists go to great lengths to evade capture. It can be a complicated process trying to get at them.” Really? More complicated than the job the media had of setting up cameras (even if they were not used) and microphones?  To claim that Mr. Abu Khattala could not have been taken at almost any time assumes one has the naïveté of a buyer of the Brooklyn Bridge. Mr. Lloyd’s interview, keep in mind, took place last October – two months after the man had been publically charged.

Playing the poodle to President Obama, the sycophantic New York Times, in a front page article on Wednesday explained that the announcement on Tuesday ended “…a manhunt that had dragged on for nearly two years.” They went on to add that the “capture was a breakthrough.” It was only on page 11 that they reminded readers that Ahmed Abu Khattala had given an interview to Times reporter, David Kirkpatrick, a report that was in the October 18, 2012 issue of the New York Times. That interview, like many of the others, was conducted over two hours on a Thursday evening “at a crowded luxury hotel, sipping a strawberry frappe on a patio and scoffing at the threats coming from the American and Libyan governments,” is the way Mr. Kirkpatrick put it.

While I don’t pretend to know all the causes of what led to the tragedies in Benghazi, it certainly appears to be a combination of ineptitude, misunderstandings and miscommunications. No good answer has been provided as to why assets were not deployed to fend off the attack, or to try to save the Americans who died trying to save the Ambassador and the compound. But it was the deliberate lies afterwards – when the “fog of war” had dissipated – that are the most troubling. Having the Secretary of State boldly lie to the families of the fallen at Andrews Air Force Base, regarding the role of the video, was chilling. Sending UN Ambassador Susan Rice to Sunday TV talk shows, to push the same story that the video was the cause, showed scorn for the American people. Now we have the Administration trumpeting the capture of a man who had paraded around the streets of Benghazi in full sight, while granting interviews to members of the press. What fools do they take us to be?

The tragedy in Benghazi might or might not have been preventable, and it is conceivable that it might not have been possible to save the men who died fighting off the terrorists.  But shouldn’t we have tried? The President rightly defended bringing home Sargent Bergdahl, regardless of the facts surrounding his capture by the Taliban. Why, then, was nothing attempted to save those Americans who died on the roof of the CIA annex fending off terrorists/attackers?

All of the subsequent events, after the attack, were driven solely by politics. Like a hot potato, blame for politicizing the tragedy was almost immediately laid off on Republicans. Certainly it is true that blunders on the part of one Party cause schadenfreude on the part of the other. But the question remains: why were Americans lied to? Perhaps Representative Trey Gowdy (R-SC) and his committee investigating Benghazi will uncover the truth. I hope so. But rare is the politician who admits of wrongdoing.

Nevertheless, the timing of the capture was curious. A couple of weeks ago, Mr. Gowdy held a press conference during which he quoted the President as having said a year ago that bringing those responsible for the attack to justice was his top priority. Mr. Gowdy reminded the press that Mr. Obama had referred to Benghazi as a “phony scandal;” that Secretary of State Hillary Clinton had asked, “What difference, now, does it make?” And that Jay Carney once said, “Benghazi happened a long time ago.” At that same news conference Mr. Gowdy shamed the media for not asking the questions he was asking. Is it not possible that the arrest of Ahmed Abu Khattala was linked to the political fallout from Congressman Gowdy’s press conference? The Administration surely had to be seen as doing something.

I am pleased that Mr. Abu Khattala is in custody, but I give little credit to the President who should have done this twenty months ago. In my opinion, the military is right in interrogating him and I hope the information they get is useful. But I suspect Mr. Abu Khattala knows that American justice is quite different from what he is used to in Libya and he will tell us very little. He knows that in New York he will be Mirandized and that he will have his day in court.

Personally, I would rather he had been taken to Guantanamo and tried before a military tribunal. And, if justice is served, he would be found guilty and executed by firing squad – a far more humane punishment than he would have inflicted on one of ours had roles been reversed.

The views expressed on AustrianCenter.com are not necessarily those of the Austrian Economics Center.
hayek_admin2019-01-14T06:16:46+01:00