A Central Bank to the Rescue…Again 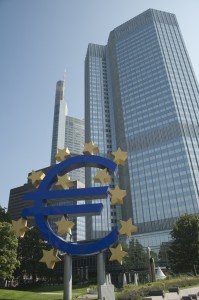 That Europe depends on Mario Draghi and the European Central Bank (ECB) to combat deflation and to drag the EU into more rapid economic growth is a manifestation of political dysfunction – an inability to implement fiscal reform has meant dependency on monetary policy. On Thursday, Mr. Draghi said he hopes the measures he has taken will give time for the “structural reforms” he has advocated in the past. Europe’s political leaders, however and like ours, are caught in the web of unrealistic promises regarding healthcare and pensions. Like politicians going back several decades, they have chosen to leave the hard choices for future generations.

Typically, sharp and deep recessions have been followed by complementary sharp and steep recoveries. Stephen Moore wrote in the June issue of The American Spectator: “…if our economy had grown as fast under Obama as it did during the first five years of the Reagan recovery, American GDP would be more than $2 trillion larger today.” But not this time. In part that was because the fiscal crisis necessitated consumer and financial institution deleveraging. But, slow growth has also been a consequence of a failure to enact tax and regulatory reform. In fact, in the U.S. taxes have risen and regulation has become more severe. According to the Americans for Tax Reform, there have been 21 federal tax hikes since Mr. Obama took office. The Federal Register of Regulations shows 13,000 final rules that were published between 2009 and 2013.

In the U.S., fear of rising deficits obscured the necessity for tax reform. Lobbying by special interests, along with ObamaCare and a more aggressive EPA, killed any possibility of regulatory reform. Because central bankers were willing to attempt innovative and creative means of addressing the financial crisis, politicians were able to duck behind the skirts of their non-elected, central banker brethren. The failure, in 2010, of the Simpson-Bowles Commission is exhibit A.

The Federal Reserve (and the Treasury) took drastic measures at the height of the crisis in the fall of 2008. TARP (Troubled Asset Relief Program), a Treasury plan, was initially aimed at removing low-quality, non-performing loans from the balance sheets of banks. Besides lowering rates to near zero on December 16th of that year, the Federal Reserve began engaging in quantitative easing – the direct purchasing of Treasuries and mortgage securities, the purpose being to keep longer term rates down. Last Friday Mario Draghi had the ECB cut its main refinancing rate from 0.25% to 0.15%. He also said the bank would charge banks 10 basis points for parking cash at the Central Bank. The ECB also announced a “funding for lending” program (TLTRO) – a tool designed to encourage bank lending. Finally, they announced a plan to buy asset-backed securities, an asset category not widely used in Europe.

The question remains, will these efforts by the central bank, in the absence of individual country fiscal reforms, be enough to power economies? It is interesting as an aside to note that European countries are considering incorporating an estimate of cash transactions in prostitution and the illicit drug trade into their GDP numbers, as a way of showing faster and larger GDP numbers. Is there nothing to which these politicians will not stoop?

On its own, and in spite of Washington, the U.S. economy shows signs of gaining strength (without including prostitution or cocaine sales!). In particular, growth is being driven by developments in hydraulic fracturing and horizontal drilling that has allowed a significant expansion in shale oil and gas production. Latent consumer demand has been helping the auto industry. Real estate prices are recovering. Last week, politicians and Leftist media types gave one another high-fives when total employment finally surpassed the late 2007 highs. They ignored the fact that about 3.5 million people have been added to the workforce over the past six and a half years. They ignored the fact that many of the jobs added have been lower paying ones in the service sector. They made a big deal out of the fact that many “Blue” states, like Connecticut, have raised the minimum wage, but have ignored a concomitant decline in hours worked. The New London Day, a local paper in my part of Southeastern Connecticut, reported on the instance of an employee of Dunkin’ Donuts who benefitted from a $0.45 increase in hourly pay, but was penalized with a commensurate reduction in hours worked.

In a Financial Times review of a new book on the causes of the “great recession,” House of Debt, by Atif Mian and Amir Sufi, Lawrence Summers wrote: “…they note that data on credit spreads suggest that the financial system was fully repaired by late 2009.” In the past, I have noted that credit spreads, while still high, had greatly receded by the end of December 2008 and that the High-yield market began recovering as early as the end of November 2008. The focus, in the U.S., in 2009 should have been on economic growth. It was that opportunity – to address the needs of the economy – that should not have been wasted when the newly elected President enjoyed bi-partisan support. It was blocking and tackling that needed to be done, not transforming America. Success in the former may have allowed a later opportunity to attempt the latter.

Congress has been paralyzed because of two very different visions for the United States regarding the role of government in our lives. The President had an opportunity to address regulatory and tax reform in 2010 with the Simpson-Bowles Commission, but he chose to ignore their recommendations. Thus, and ironically, in essentially making the Federal Reserve responsible for economic recovery, the President widened income and wealth inequality gaps – “the defining issue of our time,” is the way Mr. Obama put the issue of inequality. Lower interest rates have been a Godsend to holders of assets – stocks, bonds and commodities. Equally ironically, inflation, whether measured by CPI (Consumer Price Index) or COLI (Cost of Living Index), has been modest, except in the three areas that most affect the poorer among us – food, energy and housing. While the wealthy have seen their asset prices rise, the poor have seen their costs go up.

There are numerous issues we confront, far more perilous than inequality. Future pension and health obligations threaten to drown us. Cronyism is a menace to our way of life. Islamic terrorism remains very much alive. A misuse of executive powers provides a risk to our democracy, as does tolerance of intolerance that we see exhibited on “liberal” campuses. Inequality is a natural state in all societies. One has only to look at the palaces of Ukraine’s deposed president, Viktor Yanukovych, or the wealth accumulated by Vladimir Putin or Iran’s Ruhollah Khomeini to know that wealth is not purely a factor of capitalism; in fact, it is far more unequal in all other societies. Democratic capitalism has done more to raise living standards around the world than any other system. Winston Churchill acknowledged that inequality was an unavoidable aspect of capitalism. “The main vice of capitalism,” he once said, “is the uneven distribution of property. The main vice of socialism is the equal distribution of misery.”

That Mr. Draghi had to come to the rescue as he did – an action that was celebrated by markets – is symptomatic of the fact that Europe and the United States have yet to address needed tax and regulation reform. Low interest rates can move stock prices higher temporarily, but it will require good fundamentals to keep them up. Low interest rates help sustain a weak currency, hurting savers and raising the price of imports. Despite the relative strength of the U.S. economy, the U.S. Dollar is flat on the year. Only reform will lead to strong and sustained economic growth. Easy money can provide temporary relief, but to set the Western world on a more
robust course is going to demand radical and difficult change. It will require the support of responsible, far-seeing political leaders.

In short, a central reason why central banks have played such a significant role since recovery began five years ago is because political leaders in Washington and in European cities, on both sides of the aisle and in both executive and legislative positions, have failed to fulfill their fiscal and fiduciary responsibilities. Are they up to the challenge of change? I don’t know, but a future of liberty and prosperity depends on it.

The views expressed on AustrianCenter.com are not necessarily those of the Austrian Economics Center.
hayek_admin2019-01-14T06:17:12+01:00