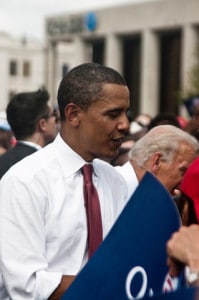 Barach Obama came to the Presidency with a radical domestic agenda and with little interest, or understanding, of global political matters. While he did assume office at a time of financial crisis, it is important to understand that much of the corrective work had been done by the time he took the oath of office. The TED spread, indicating banks’ ability to lend had narrowed dramatically from where it had been in the fall. The yield on high yield bonds began coming down in November. While we were still in recession, the bottom was only four months away. The patient was still sick, but the crisis was over.

He was elected, he claimed, to institute a liberal program. He had no interest in negotiating with those he had defeated. “I won,” was the way he put it. In the meantime, chief of staff Rahm Emanuel noted that “a crisis is a terrible thing to waste.” An $840 billion stimulus bill was rammed through Congress during the honeymoon period. The Affordable Care Act was passed unilaterally a year later, while Democrats still controlled both chambers. Not one Republican voted for the bill, something that had never before happened with such a consequential piece of legislation. The President didn’t care; he was on a roll.

In terms of his liberal domestic agenda, Mr. Obama never considered what their consequences might mean in the global world. For example, in the energy sector where a combination of horizontal drilling and fracking technologies were changing the role of America in the production of fossil fuels, he chose to go with “green” energy, solar and wind companies. His EPA, catering to deep-pocketed environmentalists, inflicted burdensome regulations, delaying construction of the Keystone XL Pipeline for four years and preventing any drilling on federal lands. We have become the world’s largest producer of natural gas, but that is in spite of Mr. Obama’s policies, not because of them. Had Mr. Obama worked with the industry, instead of against it, we would today have surpassed Russia as the world’s largest exporter of natural gas, and events in Ukraine and Europe might well have unfolded in a way far more pleasant for the West, democracy and the people of Ukraine.

It is impossible to divorce domestic issues from global ones. Unless we decide that there should be no private sector, governments are limited in what they can spend; though God knows Mr. Obama has tested those limits. That means choices must be made. Do we increase the amount we spend on transfer payments, or to we maintain a more robust military? Do we ensure that our highways and bridges are safe, or do we provide universal pre-kindergartner care? Do we raise taxes and let the economy become even weaker? Politicians, especially those on the Left, but enough on the Right to raise concerns, feel, ‘no problem;’ we can have our cake and eat it too. If they want chocolate, give them chocolate; if they prefer strawberry, give them strawberry.

The failure of ObamaCare has been the sword of Damocles hanging over the Democrat Party in this year of midterm elections. Delays in its implementation have been politically motivated, as it is as unpopular as it is cumbersome. But the delays also increase uncertainty, the bane of economies, markets and political campaigns. Following January’s State of the Union, the New York Times laid out a litany of Mr. Obama’s unfinished business. The items included: background checks for gun buyers, immigration reform, a higher minimum wage, tax fairness and universal preschool. These issues have three things in common – they poll well, they all lack even a smidgeon of common sense, and their importance is secondary to the more critical issues of the day: jobs, the economy, federal debt, future entitlement obligations and global security.

Background checks for gun buyers should be a no-brainer. Legally bought guns are for the most part subject to background checks. The problem is that the bad guys don’t purchase guns legally. While I am not a fan of guns – having last fired one on the range at Fort Dix in 1962 – I am also aware that in those cities where gun laws are tightest (including my state of Connecticut), gun crime has been most rampant. The classic example is Chicago, governed by Democrats since 1931 and which has had the worst violent crime statistics. Detroit has been run by Democrats since 1962. Cleveland, since 1941, has had two Republican mayors. The problem is not the NRA; the problem has been too many politicians who have been remiss on enforcing laws. Political correctness has prevented personal profilings and the sharing of psychiatric analyses to prevent crime in the first instance. A current example is Mayor de Blasio’s decision to cease ‘stop and frisk.’ It’s a dumb decision that will have consequences.

Immigration reform is indeed needed. We have tens of thousands of illegal immigrants coming across the border from Mexico every year and then provide them services paid for by the American people through taxes. Why wouldn’t they come? Yet we restrict immigration of college graduates from Asia. It makes little sense, if the purpose is to make the nation culturally and economically stronger.

The President was in Connecticut Wednesday making his pitch for an increase in the minimum wage. Again, this is an issue that polls well – who, for God’s sake, would argue that $7.25 is an adequate wage? But we should look at the numbers. There are roughly 125 million people working in the U.S., of whom 75 million are paid an hourly rate. In 2012, of those 75 million people, only 3.6 million were paid the minimum rate or lower. The majority of them are young, single and living at home working in “starter” jobs. Most of the minimum wage jobs are in the service industry, an area subject to technological changes, such as computerized ordering at restaurants, eliminating the need for waiters and waitresses. Raising the rate may be the “right thing to do,” as Mr. Obama alleges, but it will, according to the CBO, come at a cost of half a million jobs, or almost 15% of all minimum wage jobs. Is that the “right thing to do?”

Tax fairness is something that no one is against. It is the basis of our progressive tax rates and has been since the first permanent income tax came into being in 1913. Keep in mind, the top 10% of all workers in 2012 earned 45% of all income, but paid 71% of all federal income taxes in 2012. The bottom 50% earned 12% of all income and paid 2%. The very wealthiest Americans – the top 1% – earned 19% of all income and paid 30% of all taxes. That is the definition of a progressive tax schedule. How much “fairer” should it be?

Universal preschool is another idea that no one wants to argue against. But costs must be measured versus returns. Most evidence suggests that preschool, without good public elementary schools, does little good. The cynic in me suggests that those like Mr. Obama and Mayor de Blasio are yanking on heart strings, in appealing to voters, while catering to the teacher’s unions who look on the venture as a means of expanding their base by several thousand. (Incidentally, over the past fifteen years, the NEA and the AFT, have given $92 million to political candidates, of which $90 million went to Democrats. The despised Koch brothers, during that same time have given $18 million, including $2 million to Democrats.)

While no one will argue that these issues don’t have merit, they pale in comparison to the bigger issues we face – jobs, the economy, massive government debt and future entitlement obligations, including ObamaCare, and security, both at home and abroad. The issues Mr. Obama has chosen to focus on are soft ones, with enormous emotional appeal, designed to win elections. They suit his rhetorical style. None of them will do much to aid the economy, create jobs, pay down debt, or make the world a safer place. They allow the President to sound gloriously benevolent, while painting his opponents as ogres who care nothing for the poor, minorities or gays.

Mr. Obama is a divisive leader who seems more interested in aggrandizing even more power. He has spent more time talking about gays in the military than telling the country his plans for the Middle East, East Asia, Africa or even the continued threat of terrorism. While China is increasing its defense spending, we are cutting ours. The President spends more time telling us why the minimum wage should be raised or why pre-K children should be accommodated, rather than looking for ways to increase economic growth, so more jobs would be created.

A strong economy is an elixir for a host of problems. Mr. Obama’s numbers are telling. Total employment is roughly 2 million less than when he took office. Average family incomes are lower by about 4% than when he came into office. The economy has limped along at about a 2% annual growth rate since the recovery began, a rate half of what is typical in the early quarters of a reco