A must-read book for European politicians 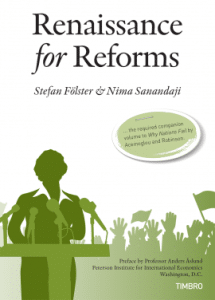 One of the paradoxes free-market advocates usually have to face is the apparent unpopularity of their policies although there is overwhelming empirical evidence that their proposals would bring positive outcomes. This could be a reason why some politicians avoid putting forward unpopular reforms, forestalling the political costs in order to stay in office. Stefan Fölster and Nima Sanandaji bring a breath of fresh air to this topic, arguing in Renaissance for Reforms that in reality those governments that carry out the needed but resisted market reforms to promote economic growth are the ones that tend to be rewarded with reelection.

To support their argument Fölster and Sanandaji focused their investigation on the market reforms that took place in 29 OECD countries since the mid-90s. Using the Index of Economic Freedom (an annual index and ranking created by The Heritage Foundation and The Wall Street Journal) the authors examined the changes in these countries during the different terms of government. What they found was a significant correlation and came to the conclusion that governments that introduced market reforms that led to more economic freedom tended to be rewarded with reelection by the electorate, even if the reforms were initially unpopular.

The correlation applied especially to center-left governments that introduced market reforms. This could be explained by political triangulation, because market reforms can be appealing to attract new non-leftist voters. For this reason, the opportunities for center-right parties to expand their electoral support introducing market-reforms was more limited. To do their statistical analyses the authors used a sophisticated probit model. However, the emphasis of the book is placed on the results and only a very short section is dedicated to the methodology.

According to the authors, voters tend to reward governments that make market oriented reforms because nowadays we have reliable ways of measuring the success of institutions. Indexes that measure economic freedom and prosperity help voters realize which institutions are successful and which are not, rewarding those politicians who promote the best institutions. Fölster and Sanandaji insist that it is not a matter of right and left wing political parties, but about the results of the reforms governments set in motion. This is key regarding their chances of reelection.

Naturally, reformist politicians usually have to deal with formidable hurdles such as entrenched interests that obstruct changes. Furthermore, some countries seem to dally government after government with failed institutions. The authors explain why not all nations follow the same path to economic reforms and prosperity, and give a particularly interesting explanation in chapter 8 when they claim different nations have different reformation thresholds.

Fölster and Sanandaji define reformation threshold as the level above which a society realizes a problem is so critical that it is imperative to make reforms. Education, access to information and past experiences can explain the different levels among different countries. For example, many successful past market reform experiences in Australia led to a low reformation threshold and Australians tend to accept market oriented reforms even before having any crisis in the horizon. On the contrary, countries such as Argentina continuously refuse to accept market oriented reforms even after deep crises. One possible explanation the authors give is the paradox of plenty: because of the abundance of natural resources governments can continually afford to adopt bad policies diverting money from natural resources to political inefficiency and keep being rewarded by the electorate. Other mentioned factors that could hinder growth reforms are the radicalization of the electorate and conflict-based policies.

Small successful reforms help to pave the way for more significant reforms acceptance in the future. For this reason the authors recommend to consider crises as opportunities to introduce reforms. They mention how Ireland and Singapore have risen out of poverty using crises to introduce growth-oriented reforms; and also how Sweden, the Netherlands and Germany improved their economies introducing reforms during times of poor growth, in contrast to Italy, France and Belgium.

Among the many examples the authors discuss, Canada is one of the most interesting ones. In the last couple of decades Canada continuously improved its economic freedom, having now one of the freest economies in the world. The authors contrast it with the United States, where lately there has been a deterioration of economic freedom. The fact that Burger King announced –after the book’s publication­– their corporate citizenship relocation to Canada seems to give further corroboration the authors’ thesis.

Reading Renaissance for Reforms would be useful for all those interested in public policy and reforms, and especially worthwhile for politicians who still think that to advance their careers they have to shy from apparently unpopular market reforms. Now there is evidence that pro-market policies are also the ones most likely to be rewarded by the electorate. Politicians, thus, do not have to choose anymore between advancing their careers and promoting the right reforms. It is fortunate to have another example of self-interest serving the interests of society.

The views expressed on AustrianCenter.com are not necessarily those of the Austrian Economics Center.
hayek_admin2019-01-14T06:13:36+01:00