A Prelude to an Upcoming Paradigm Shift: The Torments of the Absurd

by Dr. John E. Charalambakis Albert Camus wrote in his […]

Albert Camus wrote in his book The Myth of Sisyphus that “There is a metaphysical honor in enduring the world’s absurdity.” Without a doubt we live in a surreal marketplace which has managed without a monetary anchor to create a major crisis every few years, and still reinvent itself and start anew.

Camus wrote: “So it is with the absurd: it is a question of breathing with it, of recognizing its lessons and recovering their flesh. In this regard the absurd joy par excellence is creation.” Nietzsche would add “we have art in order not to die of the truth.” And what art we have (!) with fiat money that creates waves of exuberance and lucid indifferences as to what money and wealth really is.

Over the course of the last week, the Dow Jones erased all its gains and turned negative for the year, out of fear that global growth may be weakening and that the EU may be falling back into a recession. At the same time, market volatility – that forgotten animal – experienced an awaking as the graph below shows. The volatility index rose by almost 45% for the week. 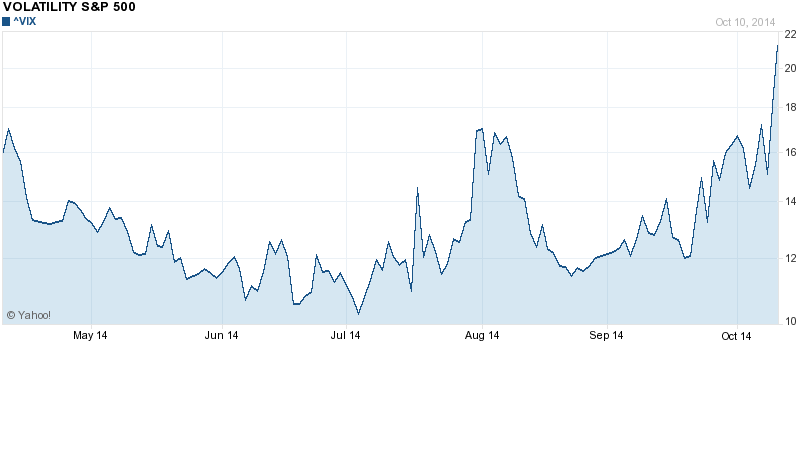 Both the S&P 500 and the Nasdaq seem to be a breath away from basic support levels and that has raised fears that we are headed for a market correction to the tune of 10%+, similar to the one that the German market has experienced. These fears may be overblown. Earlier in the week (Wednesday) the reading of the minutes from the Fed’s meeting gave encouragement to investors that a reversal Fed policies might take a bit longer, driving equities higher. The next day a reversal of the reading took effect (affirming the absurd marketplace), eventually telling the market that a dovish Fed may be concerned about projected growth due to the dollar’s rise and the impact the latter would have on corporate profits. Meanwhile one country after another in the Euroland reported bad economic news.

Here are a couple of points to ponder: First, the combination of higher volume and the fact that the S&P stopped at the 200-day moving average while the VIX failed to push above 21.50 (see graph above) may point to a stopping point for the equities’ bleeding. Second, the learning curve of traders has taught them that further market downturns are buying opportunities, especially when they review corporate profit margins which stand tall, and lower oil prices which should boost spending power, and lower production costs.

Hence, I will reiterate my position, that for the foreseeable I anticipate the equities markets to perform relatively well (however with a declining spread over the return of the debt markets), despite the fact that such an upward trend is absurd in the face of a global economy that is drowning in debt, unfunded liabilities, geopolitical risks, the flooding of fiat money, and a derivatives market that is a time- bomb for the foundations of all paper assets. The fact that the ECB will be forced to open its own floodgates will affirm Nietzsche’s saying about art (in this case the art of central banking) and the truth of zombie banks especially in Euroland.

The paradigm shift that the title of this commentary refers to has to do with a market where idiosyncratic (i.e. the firm’s own) risks play less and less of a role. Rather, systemic and market-wide events seem to give direction to the market, and hence the assessment/foreseeing of that macro-environment will be the one that will be providing the alpha that investors seek. If, for example, oil prices drop another $8-12/barrel (due to higher supply, geopolitical maneuvers given Russia’s dependence on oil, and/or the partial lifting of Iranian sanctions) we could envision a US and possibly an EU economy experiencing higher growth rates while enjoying infusions from Russian capital flight. At the same time, a smoothing in the Fed’s reverse repo operations, coupled with easy credit policies in the EU (where the ECB will cease being a day late and a Euro short), China and Japan (with the latter three benefitting from lower oil prices) could form a tail on the right side of the abnormal curve, which will become the culprit of the paradigm shift whose flag – like in the early 1980s – will be the rising value of the dollar while China experiences another awakening due to market liberalizations.

I still cannot say ode to the absurd!