A Walk Down the Elysian Fields: Cicero Meets Maimonides to Discuss Imbalances and Negative Equilibrium

This past Monday we posted an article by Chairman Paul Volcker on the need for radical financial reform (see     http://blacksummitfg.com/2978).  Chairman Volcker wrote “it is too clear that the federal financial regulatory structure is simply inadequate to head off future crises.” Further down the Chairman commented about the opaque financial instruments outside the formal banking system that undermine financial stability. The threats to financial stability constitute one important aspect of what I call the trajectory toward negative equilibrium where the marginal efficiency and returns of policies’ effects not only is diminishing but may soon turn negative, where self-corrective market mechanisms of the kind of self-determination may be indeterminate.

In my last commentary on the issue of a trajectory into negative equilibrium, I elaborated on negative real interest rates. Here are two additional examples (as reported by Zero Hedge) of the diminishing and negative effects mentioned above. As the figures below show, after almost $11 trillion (!) of QE injections, growth in exports has almost disappeared while export prices are turning negative. 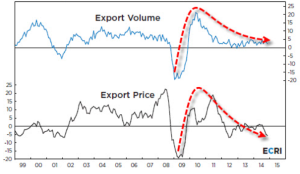 Despite the $11 trillion in QE the growth rate has failed to reach half the rate of twenty years ago.

I was walking down the Elysian Fields when suddenly I observed two figures sitting on a bench. They looked familiar and thus I approached to say hello. I was astonished to see Cicero and Maimonides discussing that same very topic. Cicero’s – the philosopher, orator, politician whose rediscovery contributed to the emergence of the Renaissance – main point was that the deviation from natural laws (including in the economic sphere) eventually lead to the abolition of “common sense” (an argument that Jefferson used while drafting the Declaration of Independence) which in turn produces imbalances that generate disequilibria. I was astonished when he showed to Maimonides the following graphs. 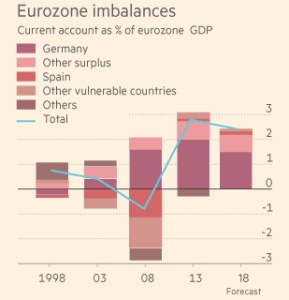 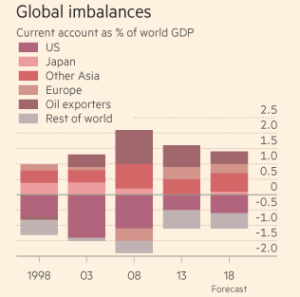 Moshe ben Maimon (a.k.a. Maimonides) whose codification of Talmudic law and the Torah are legendary, reminded us that in the Aristotelian way of thinking there can be no contradiction between natural laws – as revealed by God – and historical development. When divergence occurs between these two, then humanity brings harm upon itself which leads her to lose its purpose and the fundamental truths that should guide collective life.

“Then isn’t QE, and the use of non-conventional monetary manipulations, a divergence between the natural laws in economics and the historical financial developments that cry out for creative destruction?” I asked.