An Illusion of Value: Zirflation and Nirflation in a Market that is Overfed but Still Malnourished

The Brexit vote (for which we reserve some doubts that it is ever completed) generated some panic selling, sending investors to the refuge of safe havens. Hence, government bonds experienced price gains and yields turned even lower. Now we live in interesting days where the ZIRP (zero interest rate policy) and the NIRP (negative interest rate policy) policies of the central banks around the globe have persuaded investors that a government liability is the safest of havens! The result of all these absurd policies is that more than $11 trillion of bonds worldwide have negative yields!

The argument of this commentary is that this kind of monetary manipulations cannot produce a self-sustained recovery because monetary things affect monetary values but not real economic variables such as productivity and growth. Consequently, we believe that given the dead-end that monetary policy is approaching around the globe helicopter money will be implemented in one form or another. Therefore, current estimates of future inflation are underestimated, and hence we would not be surprised if in an environment of ZIRP or NIRP, inflation picks up momentum and gives rise to Zirflation and Nirflation. It would be an unexpected turn of events in the same manner that stagflation was unexpected in the 1970s. Of course, there are portfolio consequences if that takes place, as our conclusion below discusses.

Stashing trillions of dollars into government bonds with negative or close to zero yields provides the wrong sense of security and creates an atmosphere of artificial value, which is nothing but an illusion. In this investment atmosphere where convoluted notions prevail, we are feeding an unhealthy situation with the wrong food. Thus the bond market not only is it overfed/overvalued but it is also filled with the wrong risk baggage (malnourished), as the following graph demonstrates. 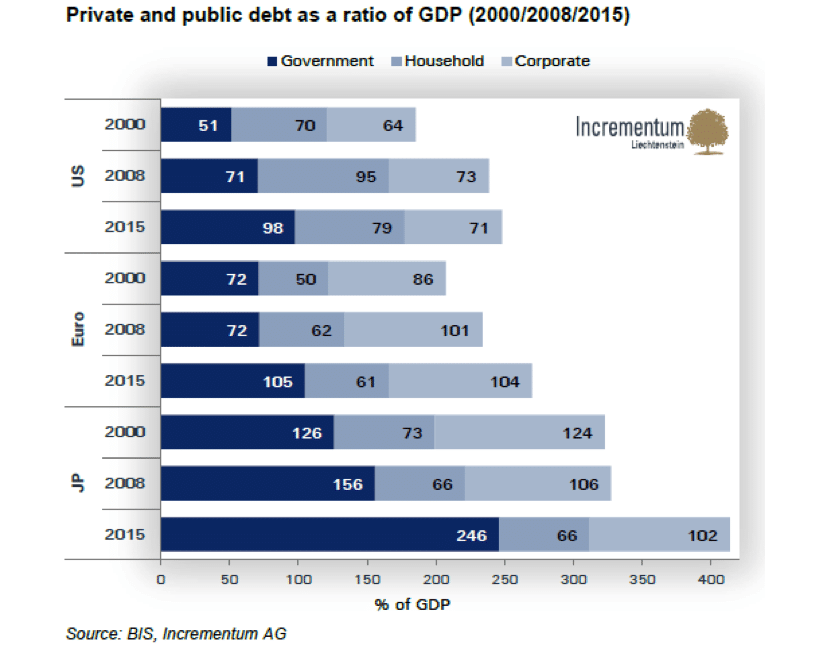 Overfeeding a malnourished market creates conflicts and the latter are usually expressed in monetary terms in the form of inflation. In addition, as doubts emerge about peripheral EU countries, a bond market segmentation surfaces which may lead to higher and unaffordable interest rates by countries such as Italy. If such a development materializes, then investors will be facing a dilemma that they had faced before during the EU debt crisis. The result will be that hard assets will be the beneficiaries of such dilemma at a time that governments try to reflate their economies through fiscal measures.

In conclusion, we are of the opinion that investors should seek an increase in the allocation of their portfolios in hard and real assets that represent no one else’s liabilities.

The views expressed on AustrianCenter.com are not necessarily those of the Austrian Economics Center.
Federico Fernández2019-01-14T05:55:24+01:00