Another Four Falsehoods About the Free Market 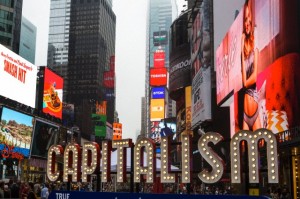 As a follow-up to my two earlier columns on falsehoods about the free market (here and here), I wanted to cover some more falsehoods that I’ve heard again recently. I’m sure I’ll have plenty of opportunities to add to the list sometime down the road.

1. The Free Market Must Be Regulated

This one never seems to get old. I wish it would just die. In truth, I agree with it, but in a different sense than it’s usually meant.

Many people say that if the government doesn’t regulate, say, the purity of bottled water, Poland Springs would be free to poison us if they could profit from it. While standards of safety or purity in some form would undoubtedly emerge on the market without government—something like Consumer Reports or Underwriters Laboratories—it’s the last part of the accusation that actually does the heavy lifting, even in our present unfree market. Profit-seeking regulates! Outside of markets that have been criminalized or heavily regulated by government, the gains from cheating and hurting others are risky and relatively rare. Legitimate business people are ready to scoop up the dissatisfied (or sick) customers of other legitimate businesspeople by giving them better value for the dollar, burnishing their reputations in the process. When’s the last time you went to a restaurant that had a reputation for poor quality, much less for food poisoning?

Bottom line: In the absence of government regulation, there’s still regulation in the free market. It’s called competition. And if you want more safety and better quality, take away barriers to free competition.

I’ve found that people who follow current events too often worry about “technological unemployment.” That’s because when a person innovates she replaces an old way of doing something with a new way, or she does something significantly different. In some cases the inputs she used to hire—land labor, capital, know-how—can adapt and continue to work with her. If they can’t, though, they have to find somewhere else to work. Some people can have a hard time doing this. But that doesn’t mean there aren’t other jobs in which they can be productive.

Consider this: The world population has grown in the past 200 years from about one billion people to just over seven billion. The number of jobs has also grown by billions, with most involving far less drudgery and danger than work 200 years ago. Ah, but what about living standards? Per capita real gross domestic product, in roughly that same period, skyrocketed from about $3 to about $100 per person per day.

How? With growing economic freedom, innovators created ever-more and better products, lengthening lives and making them more comfortable. It created not only more jobs but more valuable jobs in the process.

Anyway, the primary focus shouldn’t be on jobs themselves, because if you make things people value, the jobs will follow. Apple now employs 70,000 people worldwide. If you include all the other people whose labor is now more valuable because of Apple (app designers, for example), that number seems to range from a low of 350,000 people to a high of 500,000, some of whom probably worked for the companies Apple products outcompeted. But of course if Apple didn’t exist, those people would still be working—they’d just be making things that were less valuable and getting paid a lower wage. So while some argue for regulations to block innovation in order to protect certain (but not all) workers, to the extent they are successful the long-term result is lower standards of living for all—workers and everyone else.

What about the “unskilled”? Well, that’s a good topic for another column. Suffice to say that the Ricardian law of association demonstrates that even someone who is “worse” than everyone else at everything is still more efficient than anyone else at something.

No, they usually don’t. According to the rule of law, the law should treat everyone the same way regardless of status. Some regulations do a better job at this than others, such as speed limits on highways (unless you’re the police). But in practice, whether intended or not, all regulations benefit some at the expense of others. The Affordable Care Act (“Obamacare”) seems to have benefited the healthcare industry at the expense of ordinary people and businesses, which now have to pay higher premiums for more coverage than they want. Regulations that putatively protect consumers, such as government licensing of doctors, benefit those that practice conventional medicine and make it harder for others to enter the field. Regulations that are supposed to protect workers, such as the minimum wage, benefit skilled workers by driving up the price of hiring the unskilled. And when it’s intentional, trying to gain an advantage through legal privilege is called “rent-seeking.” As the saying goes, business owners like competition for everyone except for themselves.

This idea is as complicated as it is widespread. For instance, income inequality in the early part of the twentieth century (when, by the way, economic intervention was far less than it is today) fell sharply until World War II, but then accelerated after the mid-1970s. Inequality today has reached the level it was in 1920. It’s hard to disentangle how much of that inequality is due to intervention and how much we can attribute to the free market. Let me instead address a more fundamental issue.

Now, without giving too much personal information away, my own annual salary is over seven times the average poverty-level income in the United States this year. To some that’s pretty unequal, and I can imagine that a person making only $11,490 a year with no other source of income probably feels pretty bad-off compared to me. But consider that the annual income Bill Gates, according to this website, is about $3.7 billion. That’s $3.7 billion dollars a year! So Gates’s annual income is more than 43,500 times my own. That’s monstrously unequal by almost anyone’s standard. But it’s funny—maybe it’s just me, but I don’t feel oppressed by that fact at all. What does that mean?

I think it means that what most of us object to is not income inequality per se (although I know some people do) but poverty. So the question becomes: What is the best way to fight poverty?

The views expressed on AustrianCenter.com are not necessarily those of the Austrian Economics Center.
hayek_admin2014-02-21T09:58:36+01:00