One of the greatest privileges in my life is to sit down with people I admire and be taught important lessons. I had that honor again last Thursday in London, UK. I had luncheon with A.M. and D.M., and in the course of the conversation I was reminded that in the shaky financial world that we live in, anything goes, given the absence of anchors and the charade of fiat money which converts perceptions into reality.

Based on recently released minutes from the central banks of the UK and the US, we are guided (“forward guidance” is being called which is an absurdity and the epitome of manipulating perceptions into “realities) to believe that the current extraordinary loose monetary conditions will prevail in the foreseeable future, while we are also guided to believe that improved market conditions may warrant slight interest rate increases by year’s end. The result of these extraordinary monetary measures is the financing of deals with debt that exceeds five and six times the EBITA (earnings before interest taxes & amortization). Such high debt levels as the figure below shows, (something that is expected to keep rising) portray a market that seems not to have learned the lessons of the last crisis. 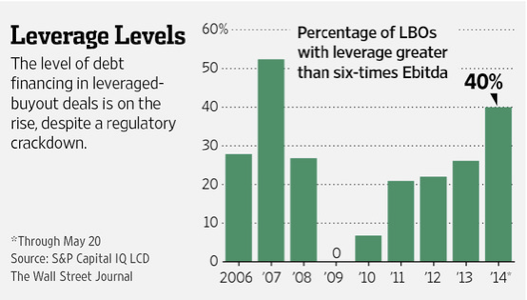 While then we expect an insignificant increase in interest rates in the UK and the US – that will try to convey the perception of solid growth – at the same time we expect the ECB and the Bank of Japan to continue pursuing extraordinary monetary measures. Hence, as the perception of solid growth takes roots in the US and the UK, we anticipate the EU and Japan to experiment with the toys used by US and UK central banks. The consequence of that, may be that the year will end with a growth rate in the US of over 3%, while the circulation of credit, collateral, and money will boost financial and economic activity and will plant the seeds for a year-end market rally, possibly to be continued at least for the first half next year. As the monetary tools emerge and as markets pick up gains, geopolitical considerations – see e.g. the recent energy deal between Russia and China – will necessitate the strengthening of the US dollar, all in an effort to convey the perception that we can create wealth by extending credit.

Of course, there is nothing wrong to take advantage of such virtual reality, keeping always in mind that it is temporary and it is only a matter of time until reality hits, or as another friend-mentor (J.B.) has taught me from Machiavelli, the degradation of political and real economic power through manipulative tools of creating deceitful perceptions converts princes to paupers.

In the course of the London luncheon we also discussed lyrics, and A.M. reminded me of the great 1930s song titled anything goes. We better heed the words:

Times have changed,
And we’ve often rewound the clock,
Since the Puritans got a shock,
When they landed on Plymouth Rock.
If today,
Any shock they should try to stem,
‘Stead of landing on Plymouth Rock,
Plymouth Rock would land on them.

In olden days a glimpse of stocking
Was looked on as something shocking,
But now, God knows,
Anything Goes.

Good authors too who once knew better words,
Now only use four letter words
Writing prose, Anything Goes.

The world has gone mad today
And good’s bad today,
And black’s white today,
And day’s night today,
When most guys today
That women prize today
Are just silly gigolos
And though I’m not a great romancer
I know that I’m bound to answer
When you propose,
Anything goes

It’s a privilege and an honor to have great mentors.