As America retreats, the world goes to hell 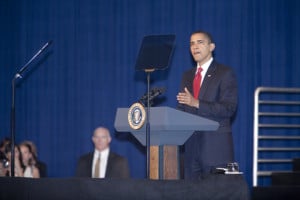 The flame of democracy, in whose defence America has invested so much blood and treasure, is being left to flicker and die on Obama’s watch

Russia’s invasion and annexation of Crimea has overtly challenged the familiar contours of the post-Cold War world. The inadequacies of the Obama doctrine and lack of strategic thought have brought Europe to the most dangerous point since the end of the Cold War.

Critics of American power have found in Barack Obama the leader they have clamoured for since President Carter — and the results are calamitous.

At the time of writing, shortly after the Russia’s overwhelming victory in the Crimean referendum, Obama is still not acting strategically. Instead his response has focused on short-term economic punishment of the Russians and the joyless task of trying to agree sanctions with both his divided European counterparts and Congress. His limited military response is even less coherent and appears to be leading to escalation with Russia, despite being too small to have any material effect on the situation.

Obama met Ukrainian Prime Minister Arseniy Yatsenyuk, four days before the referendum in Crimea, in which voters had no real choice but to join Russia. Although Ukraine announced that 80,000 Russian troops were massed on the border, Obama’s response has been extremely low key.

His natural instinct has been a reversion to “leading from behind”, evidenced by the length of time it has taken for a coordinated response to emerge from the G7, his astonishing disappearance for a weekend break to Florida, and his highly publicised appearance in an inappropriate, satirical interview.

Obama has avoided sanctions with real financial bite, both to give diplomacy a chance and to avoid unintended blowback to the US economy. The effect is that he has yet to send a powerful message to Russia about the potential consequences of reshaping Europe’s borders. If this is not the moment for an American-led reaffirmation of European security, it is hard to imagine what would be.

Even as the West agrees a low-level sanctions regime, President Putin has annexed Crimea with the agreement of its leaders and the Duma. As in the case of Iran, it is not clear what these extremely narrowly focused sanctions are meant to achieve: to ward off escalation of the conflict, result in Russian regime change or secure a return of the Crimea?

Of these, only the avoidance of escalation seems likely. The sanctions certainly won’t bring security or stability to Europe; they are politically symbolic rather than targeting Russia’s economically crucial energy sector.

Sanctions with bite would hurt the still fragile US and European economies. The weakness of the sanctions further highlights the deep divisions between America and the EU and between the EU member states themselves. They have been unable to agree on the targets of the sanctions and they missed the vast capital outflows of Russian assets that occurred before the referendum.

Obama has let America’s relationship with Germany reach a new low, particularly in the key area of security. It also remains far from clear what outcome Obama or the EU would like to see; certainly a return to the previous status quo is not realistic. As a result the sanctions are purely punitive.

The unsuitability of the EU to the type of task at hand is clear, it is not able to agree the communality of strategic purpose that Nato maintained. As EU officials now admit, the drafting of the association agreement with Ukraine, which was the proximate trigger for the current crisis, was largely left to technocrats.

It illustrates the complete lack of systematic, strategic thought about the fundamental security issues confronting Europe and Nato and the danger of American outsourcing its Nato security commitment to the EU.

Attempts to cast Russia from the international community permits behaviour hitherto unacceptable. Indeed, Russia’s response the day before the Crimean Referendum was to escalate the conflict with further military actions in East Ukraine and ominously the Nato website was subject to a serious cyber attack. The only real winner is Beijing, as Obama is forced to take his eye off South East Asia and fully engage with China’s other serious competitor, Moscow.

This is the instant when the rules of 21st-century diplomacy look set to be codified. As a result, the failure to publicly pronounce on Nato solidarity is actually more damaging than Putin’s actions themselves.

Both Putin and the rest of the world are yet to be told what the consequences of Russia’s incursions into the Crimea will be; so far the answer is “not very much”. It is hard to see what deterrent there is for further Russian territorial seizure in Ukraine.

Obama has missed the opportunity to lay down commitments or affirm America’s security obligations. It remains to be seen if he can fashion a truly strategic response while caught in the maelstrom of tactical responses to the situation. Given that he has shown no predisposition to strategic thinking so far in his presidency, it seems unlikely that he will start now. America’s rivals from Tehran to Beijing will be watching with considerable satisfaction.

The annexation of Crimea by Russia is simply the latest in a series of mismanaged geopolitical disasters where President Obama has failed to articulate any goals for the use of American power. Obama’s lack of coherent strategy did not cause the crisis in Ukraine, but it certainly failed to prevent it.

The result is that the strategic priorities for the rest of his term will be more complex, as Russia becomes a geopolitical spoiler.

Even before the crisis in Ukraine, 2014 had seen an inelegant flood of historical analogies with 1914, but as Ukraine witnesses America prevaricate over how to deal with Russia’s regional ambitions, the question is whether we are entering a new Cold War.

Historical analogies are inevitably difficult to sustain but nonetheless Obama’s lack of strategic clarity is reminiscent of the dangerously vague “ententes” that paved the way for the First World War.

The nature of the US President’s confused worldview became clear during his last election campaign. Obama seized on the writing of Robert Kagan, one of his opponent Mitt Romney’s foreign policy advisers. Kagan’s main thesis, set out in an article for the New Republic, was that ongoing arguments about America’s decline were significantly overstated and that the world had not returned to the pre-Second World War situation of roughly equal great powers.

Instead, Kagan, and by extension Obama, perceived a world of “uni-multipolarity”. In other words, the US remained the sole superpower, with several secondary powers jostling beneath.

For Kagan, American power has always been a source of ambivalence for the rest of the world, even while it valued the US’s regulatory function in times of crisis. America’s decline or continued leadership had always been a matter of strategic choice for the president, regardless of outside opinion.

Beyond the ivory tower, there is nothing particularly unusual about adopting Kagan’s worldview. The problem is that Obama’s political education occurred during the so-called “holiday from history”, in the early 1990s.

The immediate aftermath of the Cold War was a period of tremendous optimism. American power was unambiguously preponderant and triumphant. At the time it didn’t seem to matter that President Clinton had no coherent grand strategy. There appeared to be no limits to Western democracy, which led to an unsophisticated enlargement of Nato.

Obama was lulled into a false sense of security by the apparent teleology of Francis Fukuyama’s notion of the “End of History”, the seemingly inevitable march of liberal democracy. When coupled with Kagan’s view of the relative balance of power and continued American preponderance, it is understandable why Obama thought himself free of the burden of making difficult strategic choices.

The Ukraine crisis illustrates that the stability and spread of democracy, which appeared certain 20 years ago, is gradually disintegrating. It is against this backdrop that Obama has failed to make the case for America’s longstanding defence of the liberal world order.

Obama came into office with three foreign policy objectives, which fell short of the coherence of an actual strategy. First, he repeatedly tied domestic economic renewal to national security. Second, he was determined to wind down the wars in Iraq and Afghanistan. Third, he was sensitive to America’s global standing, which had reached a nadir, due to the unpopularity of those two wars.