At the Dawn of 2016: Where the Credit Cycle Meets Geopolitical Tensions and the Earnings Yield

Rising geopolitical tensions during the first couple of days in the New Year may bring a rising risk premium. At the same time, China’s market turmoil (due to slowing manufacturing activity as well as expiring restrictions on share sales) is impacting markets in Europe and the US. Some may think that rising risk premiums may coincide with the end of the credit cycle, which in turn may prompt questions about shorting. While we are watching the rising risks carefully, we believe that the credit cycle still has room to grow, which will run parallel with the lowering of the earnings yield. In short, the equity markets have some room to grow in 2016.

For the last thirty five years, the credit cycle in the US has lasted about ten years, moving from the downturn phase, to the repair and expansion phases. Currently it is on its expansion phase and we expect it to last at least another 9-15 months. Our justification for that is that the expansion phase lasts at least another year from the time that the Fed starts its rate-tightening phase. Moreover, as long-term rates remain stable the tailwind of higher consumer spending and more stable currencies will partially offset credit concerns, keeping spreads within a predictable and stable range. On top of this, the recently successful deployment of reverse repos by the Fed should assist in keeping the credit spreads stable.

Credit spreads between investment-grade corporate and high yield bonds, as well as between ten year Treasuries and corporate bonds (both investment grade and high yield), is a leading indicator among asset classes. Credit spreads are significant factors in shaping the business cycle. As the credit cycle expands, companies’ access to credit facilities remains open and hence the business cycle expands. While not downplaying other risks (liquidity, market, currency, etc.), the spread mainly reflects default risks. The latter are shocks to the system and can be caused by factors such as a financial crisis, deterioration of the economic outlook, as well as by geopolitical tensions or unforeseen events like an unstoppable virus.

As far as the fundamentals are concerned, we project improving conditions, which in turn do not justify the tightening of credit standards. On the contrary, the tailwinds mentioned in previous commentaries as well as above, along with the improved liquidity generated by the Fed’s reverse repos point to the sustainment of the credit cycle’s expansion. Obviously, if credit standards tighten, corporate fundamentals deteriorate, unless sales and EBITDA growth far exceeds the deterioration. However, the indicators currently point to improving corporate balance sheets and income statements, and thus our conclusion for now is that the credit cycle will remain in its expansion phase for the foreseeable future and hence spreads will remain within a predictable and stable range. We do not proclaim that these spread levels are natural however, due to unconventional monetary policies, over-leveraged markets, and a derivatives structure that calls for an intervening force to sustain this unnatural but stable disequilibrium.

As the graph below shows, when the spreads enter into their third phase (expansion), they remain stable for two-three years. Based on this and the experience from the previous two credit cycles (1989-‘98, and 1998-’07), we could expect the stability in the spreads to last another two years. However, we choose to be conservative and hence our call for a 9-15 months sustainment of the credit expansion cycle. 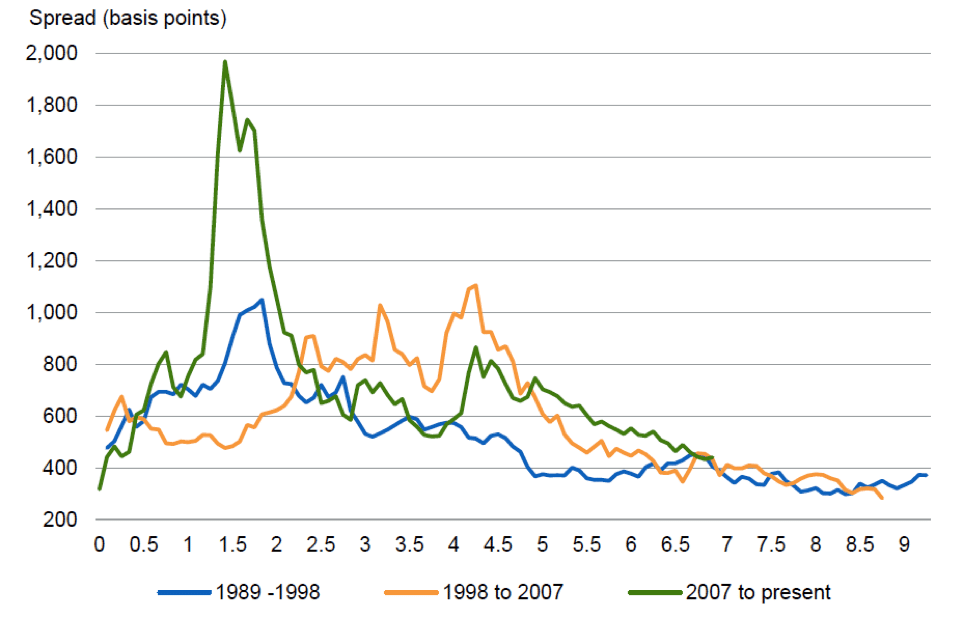 We are of the opinion that as long as the overall corporate interest coverage ratio (defined as earnings before interest and taxes and divided by the interest payments) remains within historical norms, credit spreads will remain stable and thus the credit cycle will not experience its end. On top of this, we cannot ignore the fact that the earnings yield (the inverse of the P/E Price-Earnings ratio) which remains significantly higher than the ten-year Treasury yield, signifies that equities still have some room to grow, which is the same conclusion we drew from the credit cycle trajectory.

However, as noted above, there are unforeseen and unpredictable moves that could unsettle the trajectory of the credit cycle. One of them is geopolitical developments. We are of the opinion that Middle East developments this year could be pivotal to the unfolding of world events in the years to come. Over the course of the last twelve years, the Middle East has experienced some birth pains (invasion of Iraq and its chaotic aftermath, rise of radical Islam, Arab Spring, and currently significant drops in oil prices). The reshuffling of alliances and allegiances along may alter the course of the credit cycle and inflict elements of instability in the course of the credit cycle trajectory. Assuming a reasonable deployment of diplomacy these elements of instability could prove to be buying opportunities as we are headed down the road of a decentralized Syria and Iraq and as the seeds of other disintegrations are planted elsewhere.

The views expressed on AustrianCenter.com are not necessarily those of the Austrian Economics Center.
Federico Fernández2019-01-14T05:58:00+01:00