The Austrian School of Economics: The Bogeyman of our Time?

by Scott B. Nelson

Janek Wasserman of the University of Alabama has written an engaging and interesting history of the Austrian School of economics. The Marginal Revolutionaries: How Austrian Economists Fought the War of Ideas seeks to examine the historical and social origins of the movement and to answer questions such as: “How did it emerge and evolve over the years? Who were its members? What did they believe? And why do we still care about the school, and should we?” (p. 3). By the end he hopes that his narrative will have encouraged us “to reconsider the interrelation of ideas, institutions, and power.” (p. 292). Wasserman’s account is not without certain faults, but overall it reads well and its author should be commended for attempting most of the time not to indulge too obviously in biases that distort, whether favourably or unfavourably, our understanding of the Austrian School.

Wasserman is not unaware that the School itself has suffered identity crises over its lifetime. Its intellectual father is considered to be Carl Menger, who made a name for himself in the famous Methodenstreit in the 1880s, in which the German Historical School, headed by Gustav Schmoller, was confronted by the (at the time derisively termed) Austrian School. At stake in this “history of wasted energies” was no less than the pride and honour of German vs Austrian scholars, not to mention the use of history in social science and whether the central object of investigation in economics should be a collective category, such as the people or the nation, or the individual. Menger had plumped for the latter already in his 1871 Principles of Economics, and with that work’s inauspicious appearance, the intellectual foundation for the Austrian School had been laid. 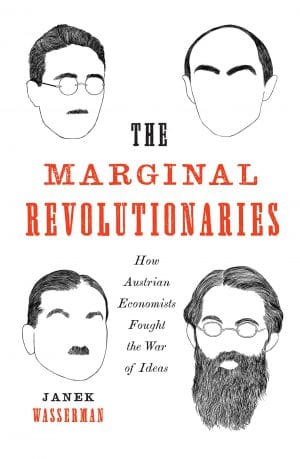 Its institutional support – the actual birth of the school – came with Eugen von Böhm-Bawerk and Friedrich von Wieser. As Wasserman writes, “if Böhm and Wieser were the true fathers of the new school, Menger was the holy spirit.” (p. 39). In Wasserman’s reading, this second generation was crucial not only in connecting Austrian ideas to British and US trends, but also in directing their polemic against socialism. It is perhaps in this critique of socialism, more than anywhere else, that the Austrian School achieves its unity, its Golden Age in the two decades leading up to the First World War. There were nevertheless disagreements even amongst Böhm and Wieser, the former taking a more theoretical economic focus while the latter adopted a more sociological approach. Variations on this split would be replicated in successive generations with some thinkers, such as Oskar Morgenstern, preferring mathematical applications to economics, while others, the most famous of them being Friedrich August von Hayek, would write some of their most recognizable works in the field of political philosophy rather than in economics.

While Wasserman describes some of these thinkers’ most important intellectual contributions, he is more interested in their capacity for networking. In addition to the foothold already established in academia, various publications (Neue Freie Presse, Neues Wiener Tagblatt, Der Deutsche Volkswirt, Der Österreichische Volkswirt) and associations (Nationalökonomische Gesellschaft and Society of Austrian Economists, to name a couple), one of the best networking opportunities were the “Kreise” (circles) hosted by various members of the school, one of the most important being the Mises-Kreis, which convened every second Friday at 19:00 in Ludwig von Mises’ office in the Lower Austrian Chamber of Commerce from the mid-1920s until the mid-1930s. The Mises-Kreis absorbed the members of an earlier Kreis, the Geist-Kreis, founded by Hayek after he had been excommunicated from Othmar Spann’s Kreis. The participants came from a wide array of disciplines: philosophy (Alfred Schütz, Felix Kaufmann, Eric Voegelin), history (Friedrich Engel-Janosi), psychoanalysis (Robert Wälder), art history (Otto Benesch, Emmanuel Winternitz), and, of course, Austrian economics (Herbert von Furth, Oskar Morgenstern, Gottfried Haberler, Fritz Machlup). This network was made international in 1938 with the Colloque Walter Lippmann, which sought to define neoliberalism as a sort of third way between 19th century laissez-faire liberalism and various forms of interventionism (Keynesian, socialist, or otherwise), attracting French liberals Raymond Aron and Jacques Rueff, the Hungarian-British philosopher Michael Polanyi, and the German ordoliberals Wilhelm Röpke and Alexander Rüstow.

These sorts of connections stood them in good stead as a depressed Europe inched towards war in the 1930s. Hayek left for the United Kingdom in 1931; Joseph Schumpeter became a professor at Harvard University in 1932; Mises took up a visiting professorship in Geneva thanks to William Rappard, who had been involved in the Colloque Walter Lippmann; Haberler also profited from the Swiss connection before Schumpeter could bring him to Harvard in 1936. The Rockefeller Foundation was instrumental in paying the salaries of some of these émigrés, such as Machlup, who ended up taking a job at the University of Buffalo. The Austrians were indefatigable in using any and all connections to help each other escape Europe and find employment.

The School was also transformed in this new context: Morgenstern, Machlup, and Haberler stuck to public policy, with Morgenstern pioneering game theory and becoming involved with US defence and government. Hayek and Schumpeter, on the other hand, became public intellectuals, writing works meant for mass consumption – The Road to Serfdom and Capitalism, Socialism, and Democracy, respectively – and cemented ties with pro-business organizations and institutions interested in spreading free market ideas.

The protagonists of the school as we know it today also come into the foreground in these years. In 1940 Machlup could still complain about Mises’ “aristocratic, elitist bearing. The Austrian’s excessive salary demands doomed any prospect of tenured employment, whether at UCLA or elsewhere. Machlup lamented to Hayek, ‘Mises is still my problem child. My efforts to reopen negotiations with Los Angeles – whose call Mises turned down in March – were without success. Mises had some possibilities at New York University, but nothing came out of this.’” (p. 170). But when the Hayek-inspired Mont Pèlerin Society (MPS), whose first meeting took place in April 1947, received funding from anti-New Deal US businesspeople, Mises’ participation in the Society was essential. “Two of the MPS’s primary backers, Crane and Pierre Goodrich, who founded the Liberty Fund in 1960…stressed to Hayek the indispensability of Mises, since he embodied uncompromising dedication to principle: ‘This is Hayek’s society, of course…but there is also in this First American Meeting a top place for Von Mises. I would not be suggesting this if I did not also think that Von Mises had a great deal to contribute. It is no argument against Von Mises that he may seem to some people to be more clear and adamant in his theories than some others are.’” (pp. 202-203).

This shift was accompanied by a younger generation of “non-Austrian Austrians”, such as Murray Rothbard, Ludwig Lachmann, and Israel Kirzner, further complicating the story of the Austrian School. It was paradoxically around the time of the Austrian School’s revival (taking Hayek’s acceptance of the Nobel Prize in 1974 as a convenient benchmark) that its tradition was most unclear. When Emil Kauder wrote his history of the Austrian School he placed Mises and praxeology at the very centre, writing out Schumpeter, the non-market works of Böhm-Bawerk and Wieser, and Hans Mayer, an Austrian economist who did not flee in the 1930s, but had rather joined the Nazis. Similarly, Machlup’s account initially excluded not only Schumpeter but even himself from the tradition. The place of the “non-Austrian Austrians” – the American inheritors of the Austrian legacy – was also problematic. The original Austrians were uneasy about associating Austrian economic theory with radical libertarianism. Of the non-Austrian Austrians, Machlup’s early draft accordingly included only Kirzner, who sought to separate politics and ideology from economic science, but