“Back to the Future?” 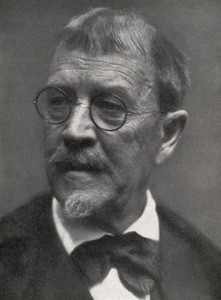 The American journalist Lincoln Steffens (1866-1936) who was notorious for his revelations about political corruption and who belonged to the group of writers of social commentary called “Muckrakers.”

In 1919, upon returning to the United States after meeting with Vladimir Lenin in Petrograd, Lincoln Steffens said to Bernard Baruch, “I have seen the future, and it works.” Today his apparent naïveté seems incredulous. But at the time such sentiments were commonplace. The Great War had changed society beyond recognition. Most of Europe was destitute, with the land laid barren by four years of war. Entire villages and cities were destroyed. Debt was overwhelming. New maps had been drawn, creating countries where none had existed. Tsar Nicholas II abdicated in March 1917, as revolution came to Russia. A little more than a year later he and his family were murdered.

It was not unnatural to blame the old guard for the devastation their policies had placed on the common man. But the Russian Revolution had little in common with the American Revolution. A monarchial, totalitarian system was replaced with a dictatorship of the proletariat. Brutal men took charge and implemented even harsher means of maintaining order. It took until the death of Joseph Stalin before the magnitude of the horrors of what the Communists had wrought on their people became public. Even today, after the collapse of the Soviet Union, it is still unknown how many political prisoners died in the Gulags, or how many millions more died of unnecessary starvation in Russia and its former satellites, but the total is in the tens of millions. Yet, there are those today in the United States that would have us follow the same disastrous track as did the Soviets following their Revolution in 1917.

Like many others, I read the piece in Rolling Stone over the weekend written by Jesse Myerson. Like many others, my initial reaction was one of being appalled. While he calls for a “just, fair society,” a concept that appeals to all of us, his means of achieving it are not dissimilar to the practices of the Bolsheviks in 1917. His solutions include: guaranteed jobs, universal incomes, community ownership of private property, collectivized wealth and state-owned banks. Intelligent, well-off, educated Americans like Lincoln Steffens, William Bullitt and Walter Lippmann traveled to the new Soviet Union in the aftermath of the War and revolution, and they liked what they saw. Mabel Dodge and Frances Perkins were likewise seduced by the words and promises of men like Lenin – ideas that sounded great, but in practice proved willfully brutal.

These Americans were not wild-eyed crazies. They were misguided. They were sons and daughters of the establishment. John Reed, William Bullitt, Mabel Dodge and Lincoln Steffens were born to wealthy parents. Reed and Lipmann were graduates of Harvard. Bullitt graduated from Yale and Harvard Law School. Lincoln Steffens was a graduate of the University of California at Berkley and Frances Perkins graduated from Columbia. Two of them, William Bullitt and Frances Perkins, served in the FDR Administration. Walter Lippman was a columnist for the New York Herald Tribune and became an ardent “New Dealer.” Yet they all fell for the lure and promise of Communism.

It is not that Mr. Myerson does not have a legitimate complaint. The economy, as he so eloquently puts it, “blows.” He is correct when he writes that his parent’s generation (that’s me and people a few years younger) has left his generation – the millennials – an “economic hellhole.” We have bequeathed a level of debt that, unless extraordinary steps are taken soon, will ultimately collapse our economic and political system. But his “five economic reforms” have a déjà-vu feel to them. Some are remarkably like the recommendations brought back by those who traveled to the Soviet Union in its early years. These men and women returned, inspired by a future they claimed “that works.” Except it didn’t. And, unlike those who succumbed to the siren calls from Russian revolutionaries in the post-World War I years, Mr. Myerson has the advantage of history, of knowing how poorly their policies fared and, worst, the horrific means that were employed in demanding allegiance.

Mr. Myerson does not encompass his recommendations in the cloak of Communism – he is too smart for that – but rather in the trappings of a benevolent “big government.” He suggests that “a universal basic income, combined with job guarantee and other social programs, could make participation in the labor force truly voluntary, thereby enabling people to get a life.” He does not define “get a life” and provides no recommendations for paying for such idyllic outcomes. Nor does he speculate as to the negative effect such policies would inevitably have on the economy. There is no reference to the fate of H.G. Wells’ Eloi. Keep in mind, throughout modern history it has been individual brains, aspiration, creativity and effort that have driven economic growth. Harnessing that drive is critical to success. Impediments lead to subservience. He proposes the communal ownership of land and property, ignoring the fact that the right to own property is a fundamental bedrock of American liberty. He suggests the creation of a sovereign wealth fund – a concept that has some merit, in my opinion. But he then takes a good idea and turns it into an absurdity, or worse. His fund would buy up all stocks, bonds and other assets from the private sector. The income from such a fund would be used to pay “dividends to all permanent residents, in the form of a universal basic income. Who would pay? With no profit motive, who would invest?

While Mr. Myerson strikes me as unusually naïve (and poorly versed in U.S. and world history) some of his recommendations have been considered by conservatives and have some merit. For example, sovereign wealth funds exist in Texas (created in the last half of the 19th Century) and Alaska (since 1976), not exactly homes to coastal elites. Texas uses the money to help fund education and Alaska actually pays dividends to residents.

The concept of providing a subsistence income to all citizens is being considered in Switzerland. The idea is that in providing an income of 2500 Swiss francs ($2800) a month to all citizens, the country could eliminate all welfare plans, including unemployment payments and state financed old age programs. Those programs in the U.S., as in Switzerland, are cumbersome and costly to run. (The idea of a universal income was first suggested by Sir Thomas More in early 16th Century England.) Importantly, as the income would not be lost when a job is obtained, the program would not starve aspiration. It is a concept that has been considered by conservatives, as it would reduce bureaucracy and eliminate social welfare plans. It is worthy of debate.

Mr. Myerson’s idea of a public bank in every state is, again, not a new idea. North Dakota has such a bank. The purpose, however, is not to channel money “toward its most socially valuable uses,” but toward small business people with smart ideas. Fond as he is of the word, Mr. Myerson also believes that Wall Street “blows.” While I have been critical of much of what happens on Wall Street, I tend to choose less colorful, adjectives. The Bank of North Dakota for seven years – 1993-2000 – was led by current Republican Senator, John Hoeven. But, instead of competing with local and national banks, the Bank of North Dakota partners with them.

The current economic situation is frustrating, especially to millennials who feel let down by a President they broadly supported in 2008 and again in 2012. Mr. Obama’s attempt to create a European-style welfare state has been a colossal failure. Detroit is an example of the welfare state being overwhelmed with the reality of broken promises. Ironically, Detroit pensioners are looking to eleemosynary institutions, funded by private capital, to bail out their pensions. Income and wealth inequality have expanded over the past five years. An extended period of low interest rates has caused asset prices to soar, but has done little if anything for job growth. An emphasis on renewable energy sources and a refusal to drill on federal lands have kept oil and gas prices higher than they need to have been, causing anguish among America’s neediest. The same has been true for corn prices, stemming from the ill-advised Bush decision to use corn-ethanol as a gasoline additive. Higher prices for fuel and food have acted as a regressive tax on the Country’s poorest.

GDP growth, for the past five years, has averaged two percentage points below the average of post-War recoveries. Over five years, that amounts to almost $1.5 trillion. There are two million fewer workers employed than in 2007. The labor force participation rate of 62.8% is at the level it was in 1978. Minorities and the young have suffered the most over the past five years. The age group 16-25 has seen the largest drop in employment, with employment lower by 1.8 million people. Black unemployment, while down from 17% in 2009, is still at an unacceptable rate of 12%. Empty promises have turned out to be just that – empty.

The President and young liberals like Mr. Myerson are more focused on issues like same-sex marriage, free contraception and government hand-outs than they are in trying to resolve the biggest challenges of our time – the disintegrating family and the explosion in out-of-wedlock births, and the contribution those trends are adding to inequality, economic hardship and social dysfunction. These people think of freedom in economic terms, rather than in classical liberal terms. Equality in incomes and the right to healthcare are equated with the right to free speech. The first two would be nice, but the last is imperative to freedom. There is no question about how poorly the current economic environment has hit millennials like Mr. Myerson, but there are lessons to be learned by remembrances of things past.

The essayist and philosopher George Santayana once famously wrote: “Those who cannot remember the past are condemned to repeat it.” The farther we travel from any incident of horror the less real it becomes. That is one reason why so many have raised concerns about the NSA. The terrible events of 9/11 are fading as the years pass. By nature, we tend to remember the good, not the bad. History, though, serves when memory fails. It is history and the consequences of policies that the Jesse Myersons’ should keep in mind when making recommendations, such as the ones in the January 3rd edition of Rolling Stone. That is a future to which we do not want to return.

The views expressed on AustrianCenter.com are not necessarily those of the Austrian Economics Center.
hayek_admin2019-01-14T06:39:43+01:00