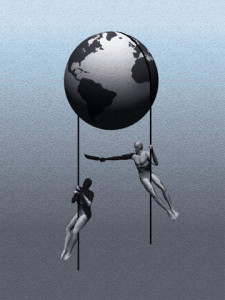 Balance is important. It is preferable to the alternative. Balance is needed by tight-rope walkers and by ballerinas. Balance is what accountants do with a company’s books, and it is what we all do (or should do) with our checking accounts. But balance is more than that. Our lives should be in balance. Helen Keller once wrote: “Toleration is the greatest gift of the mind; it requires the same effort of the mind that it takes to balance oneself on a bicycle.”

In government, balance is constructed by merging the wants of the two parties. It demands respect, as well as toleration. It assumes we will not get everything we want. But in government, as in business and in our lives, there must also be a balance between revenues and expenditures. For that, there can be no compromise. Having promised and spent more than we can afford, Washington has lost its financial balance. Despite our printing presses, what happened in Detroit can happen in Washington, perhaps in a different form, but the effect will be the same. A loss of fiscal balance has created a political imbalance. Is the trend reversible?

In my opinion, it has been the accumulation of obligations, more than anything, that have led to the polarization that envelops Washington. In a bid to be all things to all people, we have lost the common sense that is critical to the functioning of a great republic. Typically, Presidential candidates campaigned from the fringes and governed from the center. Mr. Obama reversed that trend, campaigning from the center – as a unifier, but has governed from the fringe – as a divider. Reason has given way to emotion. Respect has morphed into name-calling. The result: a rudder-less nation sailing a head sea. Is balance attainable or even desirable when the nation is facing an issue so critical? A failure to come to resolve the fiscal issue may undermine the country’s survivability…at least as we have known it.

The roots of this problem go back three or four generations to FDR’s response to the Great Depression – the creation of an alphabet soup of at least three dozen agencies, ranging from the AAA (Agricultural Adjustment Act) to the WPA (Works Progress Administration). These agencies were designed to help guide the nation and its people through the hard days of Depression. They were based on the assumption that government could best provide the means to help the aged, the ill and the poor. Thousands of people went to work for the CCC (Civilian Conservation Corps), the FAP (Federal Art Project) and the PWA (Public Works Administration). But seven years after Mr. Roosevelt took office unemployment was still running at 15%. It was the War, not domestic policies that brought an end to the Depression. This is not to argue that there is no role for government, especially when circumstances are so dire. The question is, to borrow a phrase, where should the line be drawn? How much assistance is too much? This becomes a slippery slope. When should brakes be applied? At what point does subsistence substitute for work? When does dependency destroy personal responsibility? When does dependency compromise liberty? When does spending on entitlements crowd out the ability to fund infrastructure, education and defense? At what level do tax rates diminish economic growth?

Apart from a few politicians like Paul Ryan and Mitch Daniels, these are problems that neither Party has had the courage to address – at least not in public and certainly not in detail. The problems of debt and unfunded liabilities, which are a consequence of promises made to constituents, have been ignored by the Left and many on the Right. They have created a backlash on the part of the hard-working, tax-paying, middle class. It was this more than anything else that gave rise to the Tea Party[1], most of whose members reflect America’s heartland – individuals who find “coastal elites” alien, as well as their counterparts in mainstream media. Tea Party members are generally more religious; they are hard-working, middle class taxpayers, who worry about fiscal matters and a decline in moral standards, as reflected in increased unwed births. They see it in the rise of one-parent households and a culture that promotes Miley Cyrus rather than honoring Medal of Honor recipients. The “coastal elites” tend to be wealthier and often better educated (though sometimes lacking in common sense.) The concerns of the latter lie with gay rights, feminism and global warming, bans on “big” sodas and guns, restricting smoking at home, insisting on banning the words “under God” in the Pledge of Allegiance, closing Guantanamo and similar problems – not unimportant issues, but trivial in comparison to the debt and liability problems that are hurtling our way like a run-a-way freight train.

A Left-leaning media was quick to blame the Tea Party and other right-wing organizations, as responsible for the acrimonious state of politics that exists in Washington today. But I suspect the real fault lies with the other side, and the Tea Party was simply a reaction to an increasingly paternalistic state. Over the last several decades the Country has gradually tilted left. Programs, which were well-intentioned, such as Social Security, Medicare, Medicaid and now ObamaCare have created increased dependency on government. The creation of such programs was never a question of mendacity; they were examples of one’s eyes being bigger than one’s stomach. The consequence has been that unfunded liabilities have become frightening in their size. Persistent deficits (admittedly, now declining, but from record high levels) continue to increase our debt. Low interest rates have served to protect us from the full brunt of the borrowing, but that is only a temporary reprieve. The only answer the Left has is higher taxes and reductions in defense and discretionary spending. Entitlements, including welfare but excluding ObamaCare, constitute 62% of the budget. Interest expense consumes another 6%. There is not a lot left over.

The problem is compounded, in my opinion, because of a deficit in our knowledge of history, especially in terms of an understanding of our founding, the meaning of freedom, the importance of the individual and the concept of liberty. Better knowledge would cause people to be more wary of the role dependency plays in the loss of human rights. The irony is that the United States has more college graduates than ever before. However, I would argue that our young know less of our history than did our parents.

It is worth remembering that care for the poor, the sick and the elderly is not the exclusive province of Democrats. Almost 100 years ago, and sixteen years before FDR’s “New Deal,” Calvin Coolidge argued for the need of social insurance to provide for the sick, the aged and the unemployed[2]. But in doing so, he had caveats. Coolidge emphasized the importance of character, the value of work: “…humanitarian legislation to build up character, to establish independence, not pauperism.” He stated that a democratic republic must avoid “the establishment of one class who shall live on the Government, and another class who shall pay the taxes.” Today, entitlements dominate the budget, creating dependency and leaving fewer options for our political leaders. We have become a two-tiered nation, divided between tax payers and recipients. According to a recent study by Michael Tanner and Charles Hughes of the Cato Institute, welfare recipients in 35 states get paid more than the minimum wage. In 13 states, welfare recipients receive more than double the minimum wage. And in Connecticut where I live, those on welfare receive over $25 per hour, or more than three times the minimum wage! We have reached a point from which it is hard to retreat.

Unfortunately, the Left has not taken seriously these impending problems – so obvious to those of us who think about such matters, but invisible to those who believe that ignoring this inevitable time bomb will defuse it.  At the same time, the Right has had a hard time articulating their concerns, in part because of the difficulty of explaining that we all will have to expect less from government. It is always more pleasant to give than take away. To be fiscally responsible, in a world of 140-character tweets and 30 second sound bites, is equated with being against motherhood and apple pie. Nevertheless, the Right, instead of discussing the problem rationally and calmly, while suggesting sensible alternatives, has generally reacted defensively and emotionally. The wedge dividing us has been driven more deeply.

While balance in Washington and an end to partisanship is a worthy goal, the question is: should that be our primary resolve? The problems of debt and unfunded liabilities are not going to disappear. The immediate concerns may temporarily drop off the radar screen, as an improving economy generates increased tax receipts. But better economic conditions mean higher interest rates. Higher tax receipts will alleviate the deficit, but higher interest rates will negatively impact the deficit. ObamaCare will add to the problem, as it is another entitlement. Combined, these liabilities and debt threaten to capsize our ship. It won’t happen suddenly. The risk is more insidious, as the effect of this spending gradually creeps up on us.

Increased government spending will be accompanied by a corresponding loss in personal freedom, as the “Nanny” state holds sway – think “The Life of Julia.” It is axiomatic that the bigger the role the state plays in the economy, the less autonomy there is for the individual. Already, dependency has gone a