Because We’re Running Out of Resources, Government Must Manage Them 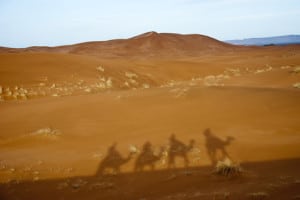 Milton Friedman once said, “If you put the federal government in charge of the Sahara Desert, in five years there’d be a shortage of sand.” The great economist wasn’t just being cute. He was pointing to a very serious problem with government management of resources. And in this chapter, we’ll talk about why it’s a problem. But first we should ask: Why are people so concerned that we will run out of resources? And how can we find a reasonable balance between using resources and conserving them?

When most people think about resources, they think about the possibility they might be used up. And running out of resources means there will be nothing left for future generations. This scares people. So the notion goes something like: If parents let kids get into the groceries on the first night of the camping trip, there won’t be any sandwiches left for the picnic. The parents wisely ration the resources and restrict the kids’ access so that there is something left for later. People who think government should manage resources are thinking that government will behave like wise parents. But does it?

What you may not have realized is that people in the market—under certain conditions—find a balance between consumption and conservation, which one might call “sustainable.” But first there has to be a complete market mechanism. This may be hard for some people to get their heads around, because most people think markets cause overconsumption. And certain kinds of markets can.

Healthy markets only exist under certain rules. The main rules are what we might call the three Ps: private property, price signals, and profit. These are the basic conditions of exchange. Without them there can be no healthy market.

Private property means that an individual has full ownership of a resource. We know who the owner is and how much they own, and that right cannot be taken away arbitrarily. The owner may also have the authority to divest himself of the resource. That means we know the difference between mine and thine and in so knowing, we have one of the conditions under which to conserve, trade, or consume.

Prices are what economist Steven Horwitz calls “information wrapped in an incentive.” When the price of some resource goes high enough, owners have the incentive to do any number of things. They might use less of the resource (i.e., conserve it), they might find new creative ways to increase the supply of the resource, or they might find a substitute, which ends up conserving the resource. Of course, we make any such choice because we expect of future returns, otherwise known as profit. And in this equilibrium created by prices, property, and profit, markets balance use with conservation.

Consider a resource that was once highly sought after: whale blubber. Whale blubber was used as an energy resource in the nineteenth century. But in the case of whales, there were only two of the three Ps. Whalers had prices and profit, but no private property. The whales belonged to what is known as the commons—which meant anyone could hunt them. Unsurprisingly, they were nearly hunted to extinction. Because no one owned them, whalers had a perverse incentive to hunt them quickly. The whales rapidly became scarce. Indeed, as the number of whales went down, the price of each individual whale went up and the incentives to hunt increased. But this can’t happen if there is a robust private property regime in place. If people could own whales, their incentive would not be to destroy them unsustainably, but to raise them. (Ironically, fossil fuels saved the whales thanks to substitution.)

In the nineteenth century American West, wild bison (buffalo) roamed the unfenced, commonly held plains by the millions. They were hunted nearly to extinction. By contrast, people could own and raise cattle, and the use of barbed wire on private property made it feasible to do so. Today, there are far more cattle in the plains than bison and even where bison are privately owned, their long-term survival is now better assured than it ever was on “public” property.
Consider trees. In North America, there are more trees than there have been in over a hundred years. Not only do foresters have incentives to regrow trees they harvest, they have incentives to cut them at a sustainable rate. Of course, in certain parts of the world—like Amazonia and Africa—concerns about forest clearing are justified. The big difference between forests in North America and South America? In one case, forests are largely government managed and in the other they are largely privately managed.

Since 1900, U.S. forestland acreage has remained stable for more than a century. Unlike some regions in the world where deforestation is happening at a rapid pace, the United States has actually maintained its forestland for the past 100 years. When one includes the heavily forested Northern Forest of Canada, forestland in North America since 1900 has grown—by a lot, according to the UN State of the World’s Forests reports.
While forests in many parts of the world are losing ground, losses in these areas are slowing. Still, that leaves the question: Why are North America’s forests growing while forests in other areas being lost? Certainly the biggest factor is whether the country has the three Ps. The absence of property rights is known as the tragedy of the commons. If we look at the facts around the world, places that have stable private property rights have stable forestland. Places that don’t have tragedies of the commons—with the attendant rush to exploit.

Political leaders in areas without private property rights have tried to solve the problem of overexploitation of forestland through the application of government management: that is, simply forbid people from using the resource or have the government allocate it “sustainably.” Contrary to Progressive conservation clichés, neither policy works particularly well.

In the case of bans, black markets form and there is a race to exploit the resource. Poachers and illegal exploiters emerge as the problems persist. For example, black rhinos are under threat in Africa despite bans. Because the profit motive is even stronger under bans, risk takers come out of the woodwork. In the case of government allocation of resources, the process can easily be corrupted. In other words, anyone who is able to capture the regulators will be able to manipulate the process in his favor. What follows is not only corruption, but in most cases considerations of “sustainability” go by the wayside, along with all the market mechanisms that constitute the true tests of sustainability.

The views expressed on AustrianCenter.com are not necessarily those of the Austrian Economics Center.
hayek_admin2014-04-24T11:18:26+02:00