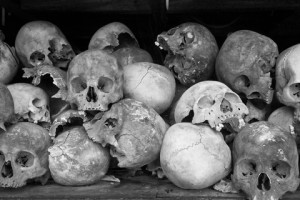 An estimated 1.7 million Cambodians — 21 percent of the country’s population — were killed or died of starvation during the 1975-79 communist terror regime of the Khmer Rouge. In terms of percentage of the population, no country has ever suffered so much at the hands of its own leaders, who were crazed by a utopian ideology that turned life in Cambodia into a nightmare.

A deeply traumatized society has taken a long time to grapple with this. Many preferred to forget and move on – because the pain was too great or because their own role in the regime, however small, made them feel threatened by a reckoning. This reaction is not unique to Cambodia; most traumatized societies take a few decades to face up to the horrors of their past, and some never really do at all, leaving untreated wounds to fester.

In Cambodia some reckoning has finally happened. A few days ago two senior Khmer Rouge leaders were sentenced to life in prison for their role in the mass killings: Nuon Chea, 88, and Khieu Samphan, 83. Nuon Chea was the deputy secretary of the Communist Party of Kampuchea (CPK) and, together with leader Pol Pot, exercised ultimate decision-making power. Khieu Samphan was a member of the party’s central committee and played a key role in its economic decision-making. Both thus bear a heavy and direct responsibility for the horrors that unfolded.

The verdict was handed down by the Extraordinary Chambers in the Courts of Cambodia, which was set up with the backing of the United Nations and mostly funded by contributions from several countries. The Cambodian government provided some money and logistical support; but the government was lukewarm and often interfered with the court. This lengthened the trial and tested the patience of the people, especially the surviving victims looking for justice.

While the government was unsure whether the demons of the past should be confronted, many Cambodians felt otherwise: more than a hundred thousand people attended the proceedings. The verdict, finally, brought a feeling that justice, however imperfect, had finally prevailed.

One of the main prosecutors, Chea Leang, summed up its meaning: “It will not give back the lives of those executed or those who died of exhaustion, or lack of food, or water, or medical assistance. It won’t rebuild families … [but] I believe it will give some justice, reinstate some public respect to those victims, dead and alive, that has been denied to them for so long” (Phnom Penh Post, Aug. 8, 2014).

The court proceedings were beset with many problems, including corruption, and took several years to reach their conclusion. Perhaps that is not too surprising — it was the first venture of its kind. Yet it set an important example of — ultimately successful — cooperation in the international community, led by the UN and local authorities, to deal with crimes against humanity. The effort was based on the principles enshrined in the UN Declaration of Human Rights, but was exercised within the local legal system. This sent the message that the world still upholds the idea that gross human rights violations should not go unpunished.

Moreover the day-to-day cooperation between the international staff and Cambodian staff has helped to build the judicial capacity and improve judicial standards in Cambodia.

Lastly the sentence, life imprisonment — the death penalty was abolished by Cambodia and is strongly opposed by the international human rights community — sends a message that the verdict was about justice, not revenge; that the inviolability of human life, which is at the heart of the idea of human rights, extends to perpetrators, too, and that fallible human law and fallible human institutions should not hold the power over life and death.

The killing fields of Cambodia are a chilling reminder of what happens when those principles are overturned.

The views expressed on AustrianCenter.com are not necessarily those of the Austrian Economics Center.
hayek_admin2019-01-14T06:14:37+01:00