“Bitcoins – What Are They?” 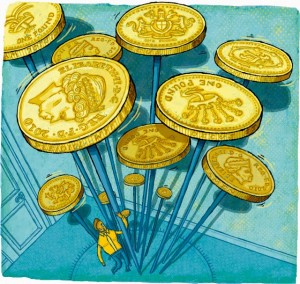 Bitcoins gained wide notoriety last week when their value declined by two thirds. They were created four years ago, by an anonymous individual (or group) operating under the pseudonym Satoshi Nakamoto. Bitcoins are not controlled by any country or central bank. They have no physical presence, so cannot be held.

They can be described as an experimental, decentralized virtual currency that enables instant payments to anyone anywhere in the world who accept Bitcoins – a small but allegedly growing number of businesses. Wednesday’s Wall Street Journal suggested “…everything from maple syrup to pornography.” Transactions are anonymous, irreversible and untraceable; therefore ideal for those who would like to hide what they do.

The idea for Bitcoins was apparently a consequence of the near-fatal financial crash in the fall of 2008. They first appeared in February 2009. They are created through a process called “mining.” In theory, anyone with a computer could create Bitcoins through an automated mathematical process. By rapidly checking various combinations of number and letters, it is possible to stumble on unclaimed Bitcoins. But they were designed to become increasingly difficult to “mine,” as time goes on; so that the numbers outstanding will expand at a decreasing rate. Thus the number outstanding is expected to expand from slightly over 11 million today to 21 million in 2140 – an implied compounded annual growth rate of about 0.5%. They are traded on exchanges like Japan’s Mt. Gox, which allegedly controls 80% of the volume and San Francisco’s TradeHill. They are stored in Bitcoin “wallets.” It should be noted that on Wednesday one Bitcoin exchange, Bitfloor that handled an estimated 4% of daily volume, announced they were closing. They said they would return all customer funds.

According to a report last February by Loz Blain, Bitcoins traded for $0.10 in September 2010. They broke the dollar level in February 2011. This past February, when Mr. Blain wrote his article, Bitcoins were selling for $30. Last week, they traded as high as $266. Late Thursday, they were trading around $95. That type of price move is catnip to a speculator. Last Friday, the New York Times ran a front page article on the Winklevoss twins (of Facebook and Olympian fame,) as becoming Bitcoin “moguls,” with a position valued at $11 million when they traded for $120. Today’s price implies the twins are out about $2 million.

As to whether Bitcoins make it into the big time as an acceptable alternative to nation-backed global currencies, depends on a few issues. While the U.S. Treasury’s Financial Crimes Enforcement Network has indicated that individual Bitcoin users and miners would not be regulated, exchanges and “wallet” holders may be. According to some reports, about 10% of Bitcoins have disappeared. Despite the fact that Bitcoin’s protocol has not, thus far, been compromised, security is a constant threat. And, obviously Bitcoins must win broad acceptance by retailers and service providers. Ultimately, the value of any currency is the ease with which it can be exchanged for goods and services – its acceptability. A paper dollar has no intrinsic value; it is only its acceptance by others that makes it so. Its issuance is controlled by the Federal Reserve, which may choose to expand or shrink the supply outstanding – generally expand, not shrink. The word “currency” comes from the Middle English word “curraunt,” which meant “in circulation.” Bitcoins to work must not be hoarded; they must circulate. Mai-Kim Cutler of TechCrunch recently estimated that the daily trading volume of Bitcoins is $31.1 million. In a market that daily trades $5 trillion in currencies Bitcoins would barely create a ripple.

Speaking of ripples, Chris Larsen, a venture capitalist with half a dozen successful start-ups under his belt, founded OpenCoin and recently formed an alternative math-based currency called the Ripple. It is virtual, like the Bitcoin, but it doesn’t require mining and apparently its operations will be more open. Whether the Bitcoin and/or the Ripple succeed or fail, what seems indisputable is that my grandchildren’s payment transactions will not be their grandfather’s, just as mine are very different from my grandfather’s.

Regardless of the obvious potential pitfalls and the somewhat patronizingly snide comments from detractors, the possible disruptions to traditional transactions could be significant. The average of daily electronic payment transfers in the U.S. is about $5 trillion. Since the U.S. represents about one quarter of global GDP, the actual number must be between $10 and $20 trillion. Thus companies like American Express, Visa, MasterCard and Western Union have to take the threat seriously.

Certainly, the venture capitalists that Ms. Cutler interviewed are doing so. They seem to endorse the concept, as today’s international payment transactions are more complicated than, for example, sending a music track to Ecuador. There are also transaction fees. Personal information and credit card numbers are frequently hacked. Is my credit card information safer at Amazon than Bitcoins would be in a “wallet?” Is the fee charged retailers by credit card companies uncompetitive in a Bitcoin world? The VCs are betting that Bitcoin will need a more reliable “ecosystem of payment processors, exchanges, wallets and financial instruments.” But it seems they are taking the concept seriously.

It is the mystery that surrounds the creators of Bitcoins and the fact that buyers and sellers seemingly have no legal obligations or recourses, which may ultimately condemn Bitcoins as nothing more than the 21st Century’s version of Amsterdam’s 17th Century tulip mania. Paul Krugman has criticized their design as encouraging hoarding and thereby the risk of wild price swings. The anonymity of Bitcoin owners and the fact that transaction are difficult to track has supposedly made them attractive to pornographers, drug dealers and money launderers. However, when one first goes to buy Bitcoins, an account must be opened and either cash or a check must be deposited. Once Bitcoins have been purchased, all future transactions are untraceable. Because no one knows who is transacting, allegations that they are being used for nefarious purposes are pure speculation. Nevertheless, they have been described as being akin to passing over a paper bag filled with hundred dollar bills.

If Professor Krugman is right, and Bitcoins are hoarded, not spent, then they will never serve as a currency. If they are not readily circulated, their value will diminish. If it is true that the Winklevoss twins bought their Bitcoins last year, they may not be the “Greatest Fool,” but they are playing the game. The jury is out, but it seems obvious that payment transfers in the future will be different from what they’ve been in the past. Bitcoins may serve that function, but at this point caveat emptor appears appropriate.

The views expressed on AustrianCenter.com are not necessarily those of the Austrian Economics Center.
hayek_admin2019-01-14T06:49:19+01:00