“Boehner and McConnell Take One for the Team” 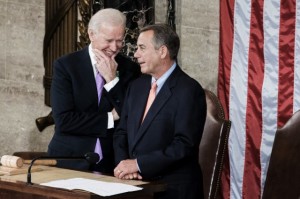 Speaker of the House John Boehner decided to go against many of his Republican compatriots by having the House vote to increase the nation’s debt ceiling, without any conditions. The tally was 221 to 201, with only 28 Republicans voting with the majority. The move was necessary, however, because Republicans had lost the tactical campaign of using the threat of a government shutdown in their war against the nation’s rising tide of debt. The quid pro quo was that this should allow Republicans to focus on the disastrous rollout of ObamaCare, a law which has thus far seen at least 27 “administrative” changes since passed by a Democrat Congress and signed by a Democrat President in March 2010. Mr. Obama’s unprecedented use of executive actions will be rued by Democrats when Republicans retake the White House, as is inevitable.

Senator Ted Cruz came close to de-railing what John Boehner had achieved. In demanding that the debt ceiling bill in the Senate be passed with a super majority, he forced ten Republican Senators to vote with the Democrats. Had they not, Harry Reid would have declared a recess and the next two weeks would have been filled with reports of how Republicans were intent on shutting down government yet again. There was a time, perhaps, when the debt ceiling symbolized unsustainable government spending, but it has become symbolic – perhaps not fairly – of Republican recalcitrance. It is the elections in November that are important, not the smug satisfaction Mr. Cruz may get from pushing Harry Reid to the wall.

This is not to suggest that debt is not a serious matter. It is. The campaign over the debt ceiling and the ensuing government shutdown last fall was lost in part because of a media that has little understanding of the financial stakes involved if we continue on this path of profligacy, but most importantly because politicians of both Parties can only see as far as the next election. They live in a make-believe world, where they spend what they want and the Treasury makes up any difference between what they spend and what they take in by borrowing, courtesy of nations like China and thanks to a Federal Reserve that has kept interest rates at exceptionally low levels. The consequences of recklessly layering on debt will have, at some point, a sad ending, most likely in the form of drastically higher interest rates and inflation.

It must be remembered that there is no intrinsic value behind the dollar, apart from the faith and credit of the U.S. government. Neither gold, nor silver, nor copper nor real estate backs a single dollar that is printed. No members of Congress or members of the Executive branch have pledged their personal assets for the money they keep borrowing. We recognize that no economy in the world is stronger than ours and no people as free. But the world doesn’t stand still, and our economy has lost some of its “mojo.” Further, studies indicate that economically we have become less free. What has been and what is will not necessarily be. Democracy is fragile and relies on faith and trust, while the economy depends on confidence that laws will be enforced and contracts honored. Too many in Washington, in both Parties, assume the game will always go on. But, like a juggler, balls must be kept in the air. Gravity, at some point, is likely to win.

For years, Americans have fed at the trough of deficit spending, aided by prodigal politicians whose concerns for the nation entrusted to their hands are secondary to their interests in the next election. With half of American citizens receiving benefits while not paying Federal income taxes, a number of canny Democrats have effectively enabled their next re-election. It is a vicious cycle that once starts spinning is almost impossible to stop.

The debt ceiling should be eliminated. It has become a political football. One’s attitude towards it depends on where one stands. When George Bush was in the White House, Nancy Pelosi and Barack Obama voted against raising the debt ceiling. Now they claim Republicans are being willful. Bickering over it detracts from the basic problem that we persist in spending more than we take in.

While some debt does no harm and the ability to borrow is critical to any operation, the growth in Federal debt is sobering, particularly when contrasted to the growth in income – the nation’s GDP. From the bottom of the recession five years ago, the annual compounded growth in GDP has been about 2.2%, while the nation’s debt (since October 1, 2009) has compounded at 8%. These n umbers actually understate the magnitude of the problem. Keep in mind, the starting point for calculating the growth in debt was at an abnormally high level, as the credit crisis and the Obama stimulus had ballooned the nation’s debt in fiscal 2009 by $1.7 trillion, or 17%. At the same time, the starting point for calculating the growth in GDP was at an abnormally low point – one quarter off the bottom of the recession. Regardless, this is not a new problem. Since 1981, U.S. federal debt has compounded at 9%, while GDP has expanded at an annual compounded rate of 5.3%. The difference this time is that borrowing has not produced comparable economic growth.

For individuals and businesses there are only two options regarding debt: pay it off or default. The Federal government has two other options, the second of which is not available to states or local governments: make the debt perpetual, or inflate. In recent times, the Federal government has never paid off debt, and they have never defaulted. But they have taken advantage of the third and fourth option. Not only has debt been perpetual, it keeps growing, and the Dollar has depreciated. Inflation, at least as calculated by the Bureau of Labor Statistics, has been modest, but for those who food shop, pump their own gas and pay for a college education, inflation has not been so benign. The cost of the run-up in Federal and state debt has not been really felt, because the Federal Reserve has been purchasing T-Bills, T-Bonds and mortgages, keeping interest rates at exceptionally low levels. At some point, though, tapering will morph into total cessation of purchases.

It is not the debt ceiling that is the problem, it is the spending. If the Administration truly believes that people want a government that provides cradle-to-grave subsistence, they should be honest about it and explain that doing so will mean across-the-board tax increases on the order of 30-50%. Entitlement spending is already limiting our ability to maintain our infrastructure as Vice President Biden so vividly noted last week at LaGuardia. Entitlement spending is crowding out military spending, with potentially frightening consequences. Europe, the model Mr. Obama seems desirous of emulating, has had the advantage for the past seventy years of a muscular friend in the United States, to help provide for their defense (as well as a market for their exports.) We have no such friend. And, of course, our debt does not include unfunded liabilities for programs like Social Security, Medicare, Medicaid, welfare assistance and now ObamaCare.

While sympathetic to the fiscal goals of those like Senator Cruz, I disagree with his tactics. Neither Mr. Boehner nor Mr. McConnell were happy to vote to raise the debt ceiling, but they did what they had to do; so that the November Congressional battles can focus on the lies and disingenuous statements that have come to characterize this Administration, the poor planning and execution of ObamaCare and the dismal economic recovery that Mr. Obama and his cohorts in the Congress have presided over, and not on truculent Republicans tilting at windmills. They did what they did for the good of the Party.