by John Charalambakis Last Friday we observed a divergence among […]

Last Friday we observed a divergence among major indexes. The DJIA and the NASDAQ moved in significantly opposite directions. The main reason for the drop in the NASDAQ (which continued on Monday) was said to be the inability of the main tech-related shares to reflect volatility considerations in their pricing. However, an obvious question is whether it is only the NASDAQ that fails to incorporate volatility dynamics or all major indexes? Are we setting ourselves up for a hasty exit if surprises jump in the news or if expectations of earnings and policies end up disappointing us?

We are in a bullish stage of the market cycle which this time is not based on central bank’s policies (even though the latter continue being very accommodative) but rather on expectations. The graph below shows that bullish bias and the 100-day moving average trend line, which could be thought of as a support line from a technical perspective. 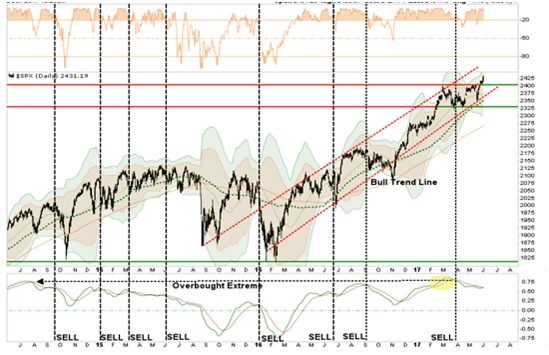 With this bullish bias at work we are facing at least two basic fundamental issues. The first one has to do with the declining margin of safety. The second one deals with the fact that the bond market does not seem to be following this bullish bias in the last three months.

Regarding the first issue, it is becoming more evident by the day that as share prices rise, their deviation from their intrinsic value becomes even bigger, and thus the deviation from the safety margin serves as a warning flag. As for the second issue, we have observed that yields on long term bonds have been declining in the last three months, as shown below, signifying a limited – for now – flight to safety.

Could the above issues point to a confused market in search of direction? When we look at the indexes breakdown, a concerning fact jumps out. The small and mid cap indexes remain relatively weak which adds to the puzzle of what may be morphing as a market breakout. On top of this the rotation of sectors that experience gains remains tight, which adds additional questions about the stability of this bullish bias.

As we are approaching the second half of the year and especially its end, the year-on-year earnings comparison may be getting tougher, implying that if earnings growth is disappointing the market  breakout may become more evident with flights to safety becoming stronger.

In closing, and when considering the real after taxes profits which are close to 2011 level, we just pause at this bullish bias and wonder for how long the virtual reality of market expectations can get ahead of real market fundamentals.