Download the Study For a Virtuous Free Trade Here 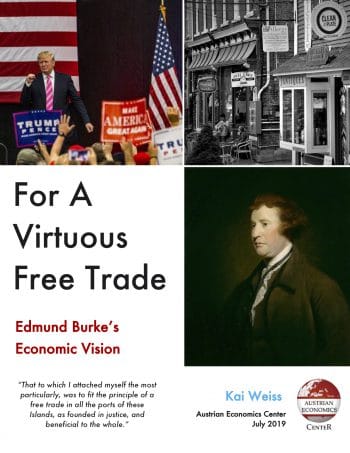 Edmund Burke is considered the father of conservatism. Yet, little attention has been paid to the economic views of the 18th century Anglo-Irish thinker and statesman. Taking a look at his views on trade and the role of the government in the economy is illuminating for today’s discussions on what conservatives should think on these topics – discussions which have been spurred by the ascendancy of Donald Trump on a protectionist economic agenda. Analyzing Burke’s works and his career in the House of Commons shows that he would have thought little of these protectionist and interventionist policies that are becoming ever more prevalent in both the Republican Party as well as the conservative movement. A good friend of Adam Smith, Burke tried over several decades to enable free trade and saw minimal space for the government to become active. His reasoning for his advocacy of free markets was not based on utilitarian grounds. Rather, his defense of economic liberty was based on a natural rights approach – meaning that every human being had a natural right given by God to own property and trade freely – coupled with a precursory version of the idea of a spontaneous order. The social order would come into being bottom-up, undeterred from the government. The market with its institutions and mechanisms would be a major part in bringing about this functioning order, which would enable a virtuous citizenry. While an overly active government promotes conflict and polarization, the market enables peace among the people. This Burkean case for economic freedom, which goes beyond mere materialism, is one many conservatives need to be aware of once more today.

The election of Donald Trump as President of the United States in 2016 has brought much upheaval to both the Republican Party as well as the conservative movement at large. The liberal consensus which was in place since the fall of the Soviet Union in 1989 – based for conservatives on free trade, deregulation, low taxes as well as a support of multilateral cooperation on the global level and an interventionist foreign policy – was replaced within months by a new philosophy based on almost the exact opposite.

A majority of Republican voters today are in favor of Donald Trump’s trade policy which relies on tariffs and other trade barriers and has its basis in protecting domestic businesses and workers from international competition (Watson, 2018). It is not only voters who have changed their views on trade: conservative scholars have been envisioning a more protectionist U.S., too (McCarthy, 2019). On the domestic economy, conservatives have demanded more interventionist policies by the government, some going so far as to embrace the ideas of Bernie Sanders, the openly-socialist 2020 Presidential candidate from the Democrats (Del Mastro, 2019). Gregg (2017) writes that “It’s hardly a secret that free markets have fallen out of favor among conservatives throughout the West in recent years.”

In these times of transition, it may be helpful to look back to the past for wisdom. In this paper, we will take a look at the economic views of Edmund Burke (1729-1797). The 18th century Anglo-Irish political theorist, philosopher and statesman is commonly considered “the father of conservatism” (Matheson Miller, 2013) – or, “indeed, the classic conservative – against whom all other conservatives must measure themselves to prove their authenticity” (Dreyer, 2007). Yet, “Burke’s economic views generally receive sparse attention” (Gregg, 2017). This is despite him being “a great economist,” as another conservative figurehead, Russell Kirk (1981, p. 228), noted. Thus, it might be worthwhile to take a closer look at his thoughts in this field.

A first sign of Burke’s economic views can be found in the résumé of Edmund Burke by the founder of modern Communism,Karl Marx, who wrote in Das Kapital (1867) that “This sycophant who, in the pay of the English oligarchy, played the romantic laudator temporis acti against the French Revolution, just as, in the pay of the North American Colonies, at the beginning of the American troubles, he had played the Liberal against the English oligarchy, was an out and out vulgar bourgeois.”

Another famous economist, Adam Smith, had a diametrically opposed opinion to Marx – it is said that the most prominent representative of the Scottish Enlightenment remarked that “Burke is the only man I ever knew who thinks on economic subjects exactly as I do, without any previous communications having passed between us” (quoted in Norman, 2013, p. 199). Smith was much impressed by Burke’s A Philosophical Enquiry into the Origin of our Ideas of the Sublime and Beautiful (Norman, 2013, p. 28). 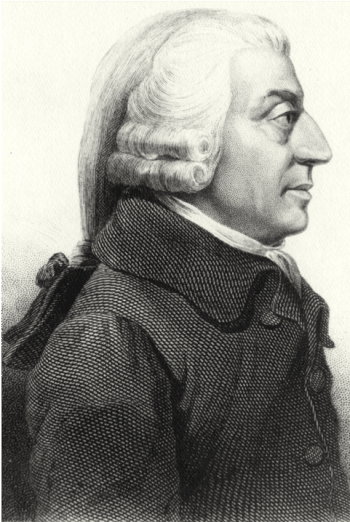 Indeed, Smith and Burke seemed to have been “personal friends who not only shared a sentimental attachment, but also considered themselves to be in fundamental agreement on most philosophical and political issues.” (Frazer, 2015, p. 1) The extent of their friendship is disputed to this day, however. Kirk (1981, p. 229), for example, argues that while they “occassionally met” in London, Smith hosted Burke in Edinburgh at least once, and “Smith obtained Burke’s nomination to the Royal Society of Edinburgh,” they were still “friendly, in short, but not close collaborators.”

Despite this, mutual agreements extend far beyond Smith’s warm words from above. Burke’s reviews of Smith’s two major works, An Enquiry into the Nature and Causes of the Wealth of Nations and The Theory of Moral Sentiments, were both ecstatic. In the review of the latter book, a copy of which Burke received from their mutual friend David Hume (Burke, 1759a, p. 46), he wrote that “We conceive, that here the theory is in all essential parts just, and founded on truth and nature.” (Burke, 1759b) In addition, he called Moral Sentiments an “excellent book.”

His review of the Wealth of Nations was no less raving: “It is a complete analysis of society, beginning with the 1st rudiments of the simplest manual labor, and rising b