There is a fundamental difference between being pro free enterprise and being pro business, as Milton Friedman famously said. One the one hand, we have a system in which businesses that serve costumers best prevail and thrive on the market, while on the other hand, we have a system in which the ones that thrive are not the ones that serve costumers best, but those that are in cahoots with the government by being given privileges, for instance through tariffs (think aluminum and steel), quotas (e.g. sugar), occupational licensing, or compliance costs.

“Almost every businessman is in favor of free enterprise for everybody else, but special privilege and special governmental protection for himself.” This is what Milton Friedman had to say about the crony businessman. But the same statement holds true in the case of the worker, who too often acts in a similar way through unions, pushing for protection either by a collective action or by governmental decree.

To take just one example, a few weeks ago, bus drivers of the Ryobi Group declared a labor strike in Okayama, Japan, demanding better job security by putting draping blankets over the ticket fare machines, thus refusing to take money from their costumers, while at the same time costing the company the gas and all the auxiliary costs for the fares. This strike came after a competing company had opened overlapping routes, while at the same time charging less for the fares. Ensuing the strike, the following meme went viral on social media: 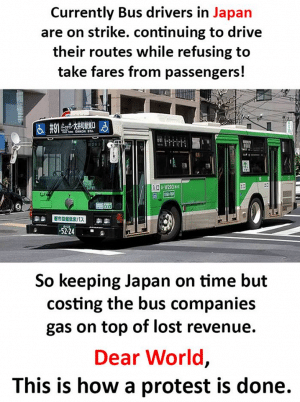 The reactions to the meme were almost split, ranging from “that is how one protests, hurting the (rich) exploitative corporations” to “the workers have to be tried/fined for the damages they’ve done to the corporation.”

So what is the right answer? Are the workers disenfranchised? Economic theory suggests that so long as the labor market is competitive, workers are being paid close to their marginal productivity. The more competitive the market is the smaller this gap would be. What this means is that if the workers are underpaid by a company X, it’s in the interest of company Y to gobble up those workers and offer them more competitive price for their labor/services.

But what if a ‘market failure’ exists in terms of monopsony? Does this change our reasoning? It turns out that monopsonies, similar to monopolies, are extremely unstable on the free market, apart, of course, from exclusive grants of government privileges (which doesn’t make it a free market anymore, though). We have to remember that the market process is a discovery process, not a static point in time. If a monopsonist existed and was underpaying its employees, in the future either the number of workers fit for that specific job would be less due to the relatively more competitive pay in other fields of work, or there will be an influx of new entrants to the market trying to capture the existing higher profit margin.

In all fairness, the protesters didn’t ask for some governmental privilege but a union-driven privilege against those not unionized. The Japanese labor market is relatively rigid, with emphasis on long-term employment (although there is a slow trend of change in the opposite direction). If the protesters really want better pay and better job security they should protest in lifting the burdens of the labor market. Embracing the free market mean no more privileges and little way for underpaying the workers.

Simon Sarevski holds a Bachelor’s degree in financial management from Ss. Cyril and Methodius, and is involved with European Students for Liberty.