Can you Hear the Oceanic Thunder? Moral Hazard Reigns Supreme in the Land of Plenty

Just a few days ago an event took place in Australia that received very little coverage. Fearing a run on a bank the Australian government guaranteed deposits up to $1 million AUD (Australian dollars)! How the government plans to pay for that is another story. Maybe in the same way that all western nations will pay for all of the trillions of unfunded liabilities, i.e. either by repudiating the debt, inflating it away, or another scheme of creative accounting, unless the deus ex machina makes its appearance sooner than the time when the final solution needs to be implemented.

On the other hand, the EU passed the legislation needed for bail-in mechanisms where the states will not fund all the possible impending bank failures, but rather like in Cyprus the depositors themselves – after a limit of €100K – will be in line to fund the banks’ rescues.

There are several reasons that make us wonder if the Australian growth model is sustainable. Its main two engines have inherent weaknesses, namely: dependence on exports of raw materials to mainly China; and too much reliance on the real estate sector. Let’s take a look at the latter. As the following table shows (taken from the Sydney Morning Herald) about two-thirds of all loans in Australia are backed up by real estate assets. Such reliance on one asset class as collateral, signifies bubbles in the sector whose stability is uncertain when interest rates start rising.

However, the problem might be even more serious given the other factor a.k.a. Chinese economic slowdown. We estimate that over the next 12-18 months the Chinese economy will be hit by bad loans, credit squeezes, banking turmoil, and limited number of bankruptcies, all of which will shake up its growth potential and therefore its demands for Australian exports. As China’s demand for Australian exports decline, the Australian economy will suffer significant tremors that eventually will hit its banking sector and currency. 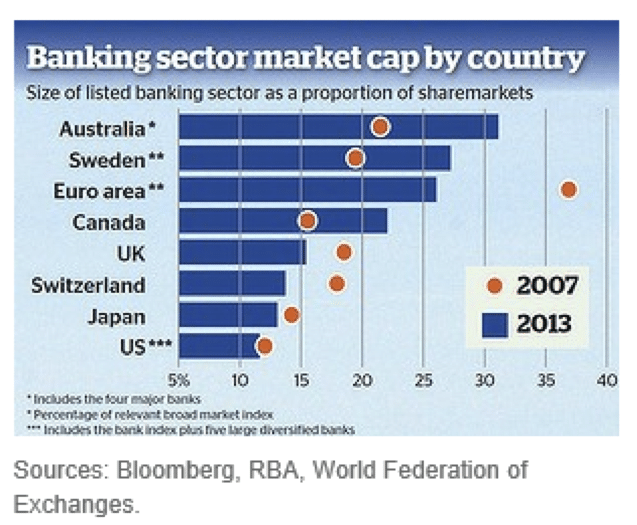 As the graph above clearly shows, Australia has outgrown its banking sector relative to 2007 when the EU and the US banks were hit with their mortgage loan issues. Australia is in dangerous territory (as EU banks still are) having their ratio exceeding the 15-20% ratio which is considered “safe”.

The implied bank guarantees build up moral hazard and remind me of the thunders heard in the US in the summer of 2007. Those built into the moral hazard storm of Bear Stearns in March 2008, to culminate with the almost financial collapse in September-October 2008.

Without a doubt New Zealand faces similar banking issues. Home prices in New Zealand have more than doubled in the last 8-10 years, far surpassing rental and income growth rates. New Zealand’s home price-to-income ratio is 26% above the historical average, while the home price-to-rent ratio is 77% higher than the historical norm. Taking into account that financial services make up 30% of New Zealand’s GDP, we can all understand the consequences on growth, employment, and incomes when tremors start due to excesses and/or due to neighboring countries’ challenges.

In 1980 the Australian musical group Men at Work wrote a unique melody titled “Land Down Under”. Maybe those lyrics can give us a hint of the storms gathering in the Oceanic countries.

Lying in a den in Bombay
With a slack jaw, and not much to say
I said to the man, “Are you trying to tempt me?
Because I come from the land of plenty.”
And he said:

“Oh! Do you come from a land down under
Where women glow and men plunder
Can’t you hear, can’t you hear the thunder
You better run, you better take cover.”

The views expressed on AustrianCenter.com are not necessarily those of the Austrian Economics Center.
hayek_admin2014-04-24T09:35:43+02:00