“Changes in the DJIA” 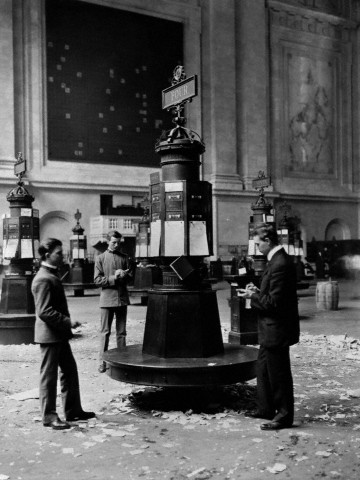 Last week Dow Jones announced that on the 20th of this month they will be removing three names from the Dow Jones Industrial Averages (DJIA) – Alcoa, Bank of America and Hewlett-Packard and adding three, Goldman Sachs, Nike and Visa. Created in 1896, the components of the Average have changed many times to reflect the changing nature of American business.

In its early years, changes to the list were frequent. Once it settled into middle age – post 1928 – additions and deletions slowed. In recent years, the list has become more active, reflecting the dynamics of the American economy.

Clarence Dow and Edward Jones formed Dow Jones in 1882. Their first product was the hand-delivering of brief news items to traders at the two stock exchanges. In May 1896 they created an industrial index composed of twelve companies, one of which – General Electric – is still listed. (Twelve years before the creation of the DJIA, Dow Jones created a Transportation Index, comprised of ten railroads and the Western Union Telegraph Company. Interestingly, Western Union spent eleven years, 1916 – 1927, as a component of the DJIA). Mr. Dow and Mr. Jones early on recognized the dynamic nature of American business and that no company on the list was sacrosanct. In the first two years there were five substitutions, including U.S. Rubber, which was on the initial Index, but removed six months later and then re-added two years later. In 1916, the Index was expanded from twelve names to twenty.In 1928, the list was increased from twenty names to its current number of thirty. That is despite a U.S. domestic GDP that has grown from $97 billion in 1928 to $16.6 trillion in 2012, and an increase in the value of all publically traded stocks from about $175 billion in 1928 to about $19 trillion today. Since 1928, the DJIA has had a price-only CAGR (compounded annual growth rate) rate of 5.2%, about one percentage point below the compounded annual growth in GDP. Of the thirty names on the list in 1928, only two remain: General Electric and Exxon, the latter then known as Standard Oil (NJ).

Keeping the list representative of the changing economy cannot have been easy. One of the companies removed this week, Bank of America, was added only five years ago. That may seem fickle, but the results support the decisions they have made. The DJIA has often been dismissed as obsolete and unrepresentative. A recent, derisive, and in fact supercilious article by Derek Thompson in the Atlantic was entitled “The Dow Jones Industrial Average is Adorable, Should Never Change.” In the article, Mr. Thompson wrote, “The economy is impossibly complicated,” an assertion with which one cannot disagree. He noted that companies are constantly being added and subtracted. He dismissively asked: “This is useful, how?” Assuming the question is not rhetorical, this is how. High frequency traders measure duration in seconds, while mutual fund managers, on average, turn over their entire portfolios once a year. In contrast, the DJIA, in adding six names in the past five years while removing the same number, reflects a turnover of 20%. If anything, the changes in the DJIA have been sluggish. Yet the performance over almost any time frame has remarkably hewed to that of the market as a whole.

Similarly, Neil Irwin of the Washington Post was equally critical and condescending in a piece entitled, “Let’s Make That ‘S&P 2000’.” He writes that while it may be tempting to use the occasion to examine the symbolism of what these changes say about corporate America, “…in reality, it really only shows the utter uselessness of the Dow Jones Industrial Average for measuring anything.” His comments are not only derogatory, they are inaccurate. Performance of the DJIA, over almost any time frame, has mimicked that of the broader market.

It is easy to criticize the DJIA. It is a price weighted index, which gives more weight to high priced stocks than low priced ones, regardless of market capitalization, a silly concept admittedly, and of course it consists of only thirty companies. While the number of publically traded companies in the Wilshire 5000 has, according to USA Today, fallen from 5672 in 2000 to 3687 at the end of last year, thirty companies still represent less than one percent of all publically traded businesses.

Nevertheless, it is the consistency of the DJIA’s relative performance over the decades that has been remarkable. Since I started in this business forty-six years ago, the DJIA has compounded annually at 6.3%, on a price-only basis. During that same time, the annual compounded price-only return to the S&P 500 has been 6.4%. The Wilshire 5000 did not exist. However, if one goes back to December 31, 1980 the base total market capitalization of the Wilshire 5000 has compounded annually at 8.4%. During that same time, the DJIA has compounded at 8.7%…again, without dividends. The S&P 500, over that same 33-year period compounded at 7.9%, suggesting the Dow Jones more closely reflected the broad market over the past thirty-odd years, as represented by the Wilshire 5000, than did the S&P 500.

In May 1896, the twelve stocks in the new DJIA represented American business. They included American Cotton Oil, American Tobacco, National Lead, U.S. Rubber and, of course, General Electric. Reviewing the list of components and changes over the years, Historical components of the Dow Jones Industrial Average, one is struck by how accurately the components represent our nation at each point in time.

Every other stock market index appeared subsequent to the DJIA, so there is no way to fairly measure how it has performed respective to the broad market over its life, but what we do know is that, in the years since there have been competitive indices, the DJIA has tracked well. It comprises a small number of large companies. It is price weighted versus the more common measurement of cap-weighted. From the day the Dow Jones Index peaked on September 3rd 1929, eighty-four years ago, the CAGR for the DJIA has been 4.5% before dividends. The CAGR for the S&P 500 over the same time was 4.8%. Keep in mind that the yield on the DJIA has historically been about 100 basis points higher than that of the S&P 500, which would have more than made up the difference. The CAGR for the DJIA since hitting its 100-year low on June 30, 1932 has been 7.6%, exactly the same as that for the S&P 500. Because the yield on the Dow has typically been higher than that of the S&P 500, total returns for the former have been slightly higher than the latter.

The same is true for the short term. Year-to-date through yesterday, the price return on the S&P 500 is a positive 20%; for the DJIA it was 10%. However, again the yield on the DJIA is about 80 basis points higher than that of the S&P 500. Given the differences in weightings and in actual number of issues, the differences are surprisingly small.

Time may prove reporters like Mr. Thompson and Mr. Irwin eventually correct, but thus far the remarkable thing about the Index is that, in markets that are increasingly complex and varied, simplicity has worked, at least in this small corner of the investment universe.

We live in a world in which everything moves at ever-increasing rates of speed. In the thirty-eight years between 1929 and when I entered the business in 1967, thirteen companies had been removed from DJIA and a like number added. In contrast, over the past forty-six years (1967 – 2013) twenty-four companies were added. In the first period, one change was made every three years; in the second, one change was made every two years. Including the three companies that will be added on Friday, there will have been seven additions and deletions in five years. A point of interest is that there are six companies in the DJIA that did not exist when I entered the business: Cisco, Home Depot, Intel, Microsoft, Nike and UnitedHealth Group.

We should expect further changes. Apart from the politics, both domestic and geo-political, there are positive drivers of change in the economy. Most obvious is that money remains plentiful and cheap. Shale fracking is leading to more abundant and cheaper energy sources, reducing our dependency on imports and aiding manufacturing in a globally competitive market. The creative destruction, so aptly described by Joseph Schumpeter is changing the way we communicate, and our universities remain the best in the world; though our underperforming public high schools are concerning. The only fly in the ointment is Washington where a lack of pro-growth fiscal policies and an abundance of regulatory rules provide a governor on growth. Nevertheless, as the economy expands in different directions one should expect the composition of the DJIA to reflect these continuing changes. 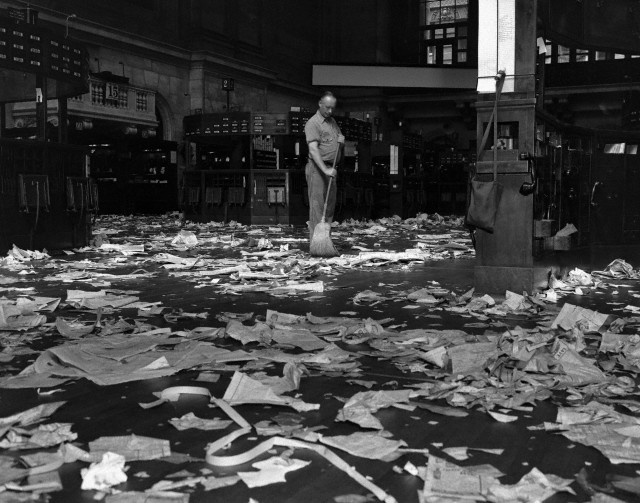 Original caption:9/28/1938-New York, NY: A porter sweeps up the debris from the floor of the New York Stock Exchange after a brisk day of trading.

The views expressed on AustrianCenter.com are not necessarily those of the Austrian Economics Center.
hayek_admin2019-01-14T06:43:32+01:00