In the last few commentaries we have noted that while equity markets may be stretched, there might still be room to grow given the current macro-circumstances, corporate earnings, and business sentiment. In this week’s commentary we would let some graphs do the talking and we would summarize our position in the following way: We are still of the opinion that there is room for equities to grow (especially overseas), but we are concerned by the weakening of the dollar which could have far-reaching consequences. At the same time we are concerned that the Qatari situation could evolve into a major crisis, at a time when China may be trying to establish settlement of futures contracts using their currency (rather than using the greenback for settlement purposes) which would further weaken the dollar’s strength and the geostrategic position of the US, resulting in a crisis of leadership and confidence which in turn could have serious geostrategic and geoeconomic consequences.

The first graph, below, shows the inventory (in thousands) of existing homes for sale. The low inventory results in low sales activity, but also could be the forerunner of continuous new housing activity that advances real investment spending, wages, incomes, and jobs.

The second graph, below, shows that consumer confidence may be getting a hit. This could be the result of a number of factors, but I would opt for the opinion that consumers hear a lot of talk but cannot see the walk. The politics of the arrogant capital in D.C. reflects a disunion that betrays the moral character of America, and sooner or later that disunion will have market ramifications. 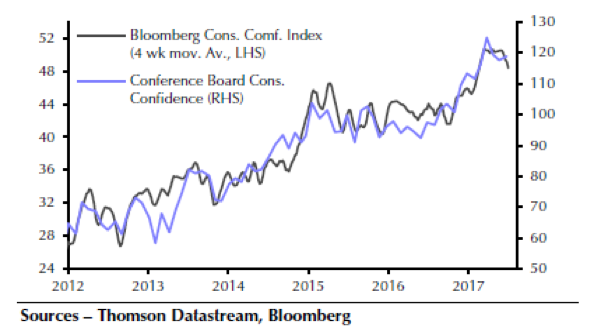 That brings us to the core of our theme in this commentary, which is nothing but the cheapening of the greenback in the last six months as clearly shown below.

It is a fact that China is preparing to start trading oil contracts in yuan (RMB). This is a major development in the capital markets. Soon to follow will be gold contracts. Given the amount of dollars the Chinese hold, we would not be surprised if they try to also control the value of the dollar. This is pure game play and unless you can stay ahead three steps of your opponent, the currency games can dramatically change the capital markets picture and the calmness (low volatility) that is now observed.

As foreign-exchange reserves (mainly USD) around the world have peaked and started falling, the temptation for China is to print yuan for oil and offer guarantees through gold settlement contracts. This could be a game change since we would end up with two functioning oil and gold contracts (in USD and RMB). However, the gold/oil ratio could only be expressed in one and currently that ratio stands at around 20 (meaning you need 20 barrels of oil to buy a troy ounce of gold), as shown below (courtesy of Macrotrends.net). 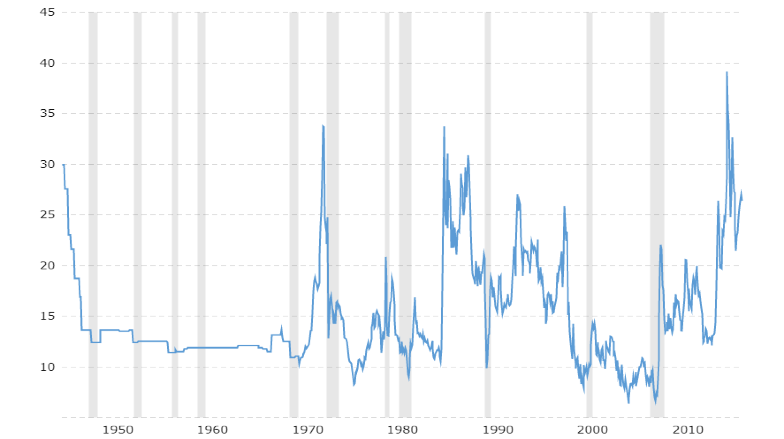 The problem with such high ratio is that – as the graph shows – it is observed in pre-periods of a crisis or during a crisis. Now, if we search the globe for a crisis, we could see a few possibilities: Venezuela, North Korea, Yemen, Qatar, to name a few that could have global consequences due to their energy reserves, the players involved, or the weapons they have.

How then could the above be related to a possible crisis? How about if China aligns herself with Qatar and denominates gas contracts in RMB? Far fetched? I hope so, otherwise I could hear the dollar echo of Sic transit gloria mundi….