China and the ‘Four Winds’ 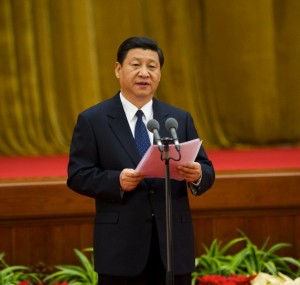 China has been both lionized and vilified over the past three decades. It has been seen as the saviour of Western capitalism, but also as a state-run economy intent on becoming the hegemonic nation in East Asia, if not the Pacific. While we admire their economic progress, we worry about their lack of civil rights and the environmental impact of their economic growth. Last month China named a new political leader Xi Jinping, but last week he spoke using the language of the Mao era.

The East has always seemed mysterious to the West. Rudyard Kipling wrote that “never the twain shall meet.” What we do know is that we cannot hope to understand the Chinese by assuming they will fit a mold formed by Western thought. An op-ed by Mr. Xi recently appeared in the People’s Daily , a Chinese language paper known as the State’s official newspaper. In it, the term “mass line” was used, as in the “mass line is the ruling lifeline” for the Communist party.

It is a phrase that harkens back to the Mao era and, according to Russell Leigh Moses writing in last Friday’s Wall Street Journal , “denotes the need for officials to get close to the masses, and to know their needs and demands intimately.” Specifically Communist party cadres were told to attack the four winds of formalism, bureaucracy, hedonism and extravagance. In a videoconference last week, Mr. Xi again urged cadres to “focus on self-purification, self-improvement, self-innovation and self-awareness.”

The concern of Mr. Xi is that the widening wealth gap and political corruption is dangerous to the long-term stability of the Communist party. As more Chinese enter the middle classes and as technology permits them to interact with the rest of the world, it is only to be expected that control will be lessened. Cadres, who had been relying on the presumption that middle-class wealth will act as a pacifier, fail to understand the universal nature of the human psyche – that the more you have, the more you want. As Eddie Cantor used to sing after the First World War, when American Doughboys were returning home, “How ya gonna keep ‘em down on the farm, once they have seen Paree?” Democratic capitalism, as we know it, and Communist totalitarianism are incompatible.

In the post 2008 environment many in the West looked upon China’s mercantilist economy with envy, as state-sponsored growth allowed their economy to sail through those disruptive days with relative ease. An infrastructure was created. Roads, bridges and airports were built. Today, as Barron’s noted in last week’s issue, “…empty apartment buildings rim hundreds of Chinese cities.” They write of the “ghost city” of Ordos in Inner Mongolia, which was built to accommodate a million people, but has been empty for six years. They picture the Jiaozhou Bay Bridge, 26 miles long, but which sees little traffic. They cite a railroad station that is “something out of a science-fiction movie,” but silent, as no trains run. The article in Barron’s , however, reported first quarter GDP growth of 7.7% and bad debts inside the Chinese banking system of 1% compared to 3.4% in the U.S. They also wrote that China “boasts a debt-to-GDP ratio reckoned conservatively at about 30%, less than half the national debt rate of the U.S.”

But statistics are funny things. On October 9, 2007 I wrote a cautionary piece on China. I quoted Lester Thurow, former Dean of MIT’s Sloan School of Management, who had argued that economic numbers from the Chinese government should be viewed with skepticism. He had written a piece in the August 19, 2007 issue of the New York Times that stated, based on electricity consumption, real GDP in China is probably growing between 4.5% and 6.0%. Lending credibility to the inaccuracy of Chinese statistics, Wikipedia puts government spending at a mere 20.1% of China’s GDP, while they have the U.S. at 38.9%. The U.S. numbers, which include state and local spending, are accurate. The Chinese numbers beg credibility. The Financial Times , in an article last week, “Echoes of Mao in China cash crunch,” estimated that the overall credit-to-GDP ratio in China was closer to 200%, versus 120% five years ago. (In the U.S., our comparable ratio is about 250 percent.) Rapid expansion in credit growth is almost always associated with rapid rises in asset prices, careless analysis and complacency on the part of investors – a combustible mixture.

But it is not just the overbuilding of infrastructure projects and the creation of overcapacity in basic industries like steel, cement, solar panels and wind turbines that worry Mr. Xi. It is the graft that so frequently accompanies such projects – what we call crony capitalism – and the lifestyle of the young, rich and politically favored, which must appear unsettling to the nation’s reputed 900 million poor.

China has chosen to generate economic growth with government-sponsored programs. In its early days, it lifted millions of people from rural poverty to factory jobs along its southern coast. Its economy, according to most all assessments, grew at near double-digit rates for almost three decades. But in so doing, there was no natural governor to control the speed of growth. It has built cities and factories that nobody wants, and bridges and roads that lead nowhere. The New South China Mall, twice the size of the U.S.’s Mall of America in Bloomington, Minnesota, has been 99% empty since its 2005 opening. In order to maintain its growth, China increasingly took to the credit markets. Whereas in happier days a Yuan borrowed created a Yuan of GDP, more recently, according to Barron’s , it has been taking four borrowed Yuan to create one Yuan of GDP a trend in the U.S. that helped lead to the credit crisis of 2008.

Whether one is in the East or the West, free markets, private ownership and the rule of law have always worked best for economies over a sustained period. Those factors combine the natural supply of goods and services with demand from individuals and businesses. They reflect an understanding that profits will accrue to owners and that contracts will be honored. The freedom to do so allows for confidence, a characteristic impossible to manufacture.

When in crisis, however, states feel the need to take control of the economy. It is political suicide for a head of state to be seen doing nothing. Instead of reducing taxes to stimulate consumer spending, political leaders feel the urge to spend taxpayers’ money, whether or not it makes economic sense. The natural instinct of most politicians, in times of stress, is toward Keynesian economics. But, just as we are hindered today by obligations due to unfunded entitlements, China is constrained by the fact they have already built more roads and airports than they need. Unfortunately, supply-side economics, which definitionally mean less government, is antithetical to state-controlled economies, like China.

We all know that the growth China has been experiencing is unsustainable. The question is: how will it end? The Shanghai Index, down 67% from its peak in October 2007, has already seen a major correction. But now it is the economy that is in question. According to pilots, every plane landing is a controlled crash. Can China’s leaders do the same with their economy?

Last Thursday, a mid-size state-owned bank, China Everbright, defaulted on a six-billion Yuan loan from another bank. Interbank rates rocketed to 13% from 8% the day before and 4% last month. Some commentators explained the move as nothing more than the Central Bank’s decision to drain reserves, to slow the rate of lending. Markets rallied somewhat on Tuesday, as China’s central bank injected reserves. But the problem could reflect ebbing confidence in the quality of China’s financial system. A shadow banking system, over which government officials have less control has evolved and is estimated to have accounted for more than 45% of China’s credit creation. These are loans that include those made off-balance sheet. And, as we well know, off-balance sheet liabilities were one of the principal explanations for the melt-down in the U.S. in 2008. Regardless of where the fault lies, however, there is truth to the old saying that the bigger the party and the longer it lasts, the deeper and longer the hangover.

Mr. Xi recognizes he has a problem. China’s economy is likely to slow markedly. Whether he can control the rate of slowdown remains unknown. But his editorial about the need to address hedonism and extravagance suggest a man who is concerned about the survivorship of the Communist party. Like Nik Wallenda, Mr. Xi must navigate a narrow tightrope. Too much wealth accruing to a small group of cadres risks unrest among the populace. On the oth
er hand, asking those cadres to cut back on their expensive cars, big houses and outlandish lifestyles may alienate Mr. Xi’s principal supporters.

It would appear he has two choices. He could tighten his control over the Communist party, or he could substitute democratic capitalism for the mercantilism that has been China’s signature for the last two or three decades. In an editorial on the subject, Tuesday’s Wall Street Journal sounded almost Panglossian in their conclusion: “…a more market oriented economy will be more prosperous and fair, and will also better provide public goods like clean air and safe food.” While true, it reminded me of the old English proverb: “If wishes were horses, beggars would ride.” More likely, in my opinion, is an earlier line from the same editorial: “The worry is that Beijing waited too long…”

Regardless, Mr. Xi’s evocation of the “Four Winds” is a reminder that China is still China.

This memorandum has been prepared as a matter of general information. The accuracy of the material submitted, though