Is China the Best Implementer of Catholic Social Doctrine?

A re-occurring phenomenon surrounding socialism is that whenever a new project is being started, Westerners will visit the places and – supposedly at least – find paradise on earth. Socialism works in these countries, they always proclaim. It was the case in the 1920s when the Soviet Union started its seven-decade journey of despotism, it was true in Cuba, Maoist China, today’s Venezuela (all of it beautifully chronicled by the Institute of Economic Affairs’ Kristian Niemietz) – it was even true in North Korea.

So it shouldn’t be too shocking — but rather just another frustrating example of someone who ignores the impossibility of this system — when one consider the comments made by Marcelo Sánchez Sorondo two weeks ago. The big difference: Sarondo is a bishop. Or to be more precise, he’s the chancellor of the Pontifical Academy of Social Sciences. The Catholic Church, throughout the misery communism brought in the twentieth century, stood tall in many of the countries which underwent these sick experiments, and was responsible for at least some of the tiny amount of hope that remained in many Eastern Bloc states.

Nowadays, we have Bishop Sánchez Sorondo who praises the Communist Party-led China, saying that “China is the best implementer of Catholic social doctrine.” How the Chinese example can be seen as the best example of such Catholic social doctrines like human dignity, subsidiarity (i.e. decentralization of political power to the lowest level), or private property, all of it being developed over centuries of teaching (and profoundly written down for example by Pope Leo XIII in his Rerum Novarum), is a good question.

But hey, at least China is defending the Paris Climate Accord! “In that, it is assuming a moral leadership that others have abandoned,” the bishop said. Overall, as the Catholic Herald quotes him, the Communist state can be seen as nothing short of “’extraordinary,’ saying: ‘You do not have shantytowns, you do not have drugs, young people do not take drugs.’ Instead, there is a ‘positive national conscience.’”

Now, it is indeed true that Christianity is on the rise in China, and could overtake membership in the Communist Party soon, as this graph from the Council on Foreign Relations shows: 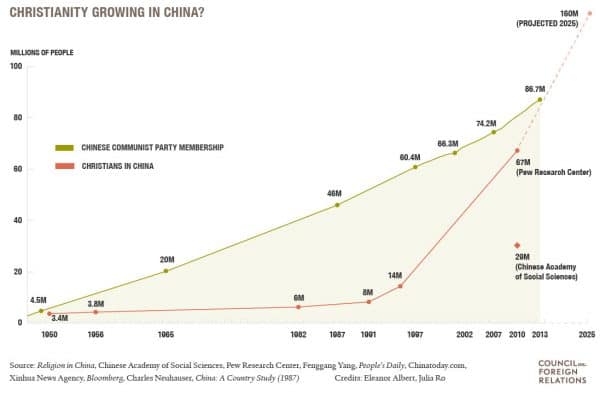 However, this is happening not because of the Chinese state, but despite it: Christian music, like Handel’s Messiah, is forbidden to be played. Chinese authorities have started to crack down on Christian communities in recent months, confiscating bibles, and arresting religious leaders. Just one month ago, the government blew up – yes, blew up – a Christian megachurch. The Chinese state in some areas has barred anyone under 18 from attending religious services. As The Independent wrote: “the surging popularity of non-state-approved churches has raised the ire of authorities, wary of any threats to the officially atheist Communist Party’s rigid political and social control.” All of that not even mentioning the cruelties of forced abortion.

Of course, persecution of practicing believers is nothing new in socialist regimes. This was especially true at the beginning of Maoist China, where under Mao the state abolished all belief systems different than Communism. The Economist writes: “Communist revolutionaries saw these religious traditions as an impediment to progress and a reason why the country remained poor. So they set about destroying the entwined belief system of Confucianism, Daoism and Buddhism, and replaced it with the new trinity of Lenin, Marx and Mao. Only by doing so, they believed, could China be saved.”

The Communist’s dislike of religion was evident from the beginning, if not inherently needed for its own survival, as Ryszard Legutko writes in The Demon in Democracy:

“Marx’s attitude well reflects the feelings that the socialists and communists have always had about religion: on the one hand, a profound hostility, often accompanied by an almost sadistic longing for a world in which religion would be wiped out without a trace; on the other, a wish that socialism become a genuine form of religion in the sense that it would satisfy needs, dreams, and desires similar to the way in which religion did and which apparently inhered in human nature.”

Only one religion is allowed in a Communist paradise: Communism itself.

Meanwhile, the Church has stood as the biggest barrier between Communists and their inhumane goals. Legutko continues: “The communists felt— quite rightly — that the Church and Christianity were the strongest barriers that protected the nation against the regime and its ideology, and that their power would not be secure until the Christians were totally subdued.”

To be sure, it is true that things could be — and have been — worse. Indeed, since the opening of the markets by Deng Xiaoping, significant improvements have occurred under what was once a Soviet-style regime. But a lot still needs to happen until the Chinese people can be considered free, especially when it comes to personal freedom (where the country ranks number 136 of 159 in the world in the latest Human Freedom Index). Religion could play a crucial play in this. But not through a state, as Bishop Sánchez Sorondo thinks – rather as a belief system pitted against state socialism.

Kai Weiss is a Research Fell