“Climate Change – Who are the Real Deniers?” 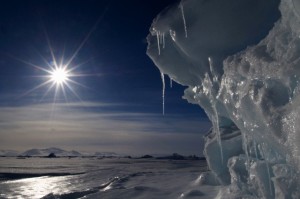 At some time today the United Nation’s Intergovernmental Panel on Climate Change (IPCC) will release its “fifth Assessment report.” Climatologists from around the world have spent much of the week in Stockholm debating the thirty-odd page document that will summarize the (approximately) 2000-3000 pages of scientific discussion. This widely anticipated report, like a boomerang, returns every five or so years.It brings gleeful portents of doom to those who feed on such fears both politically and financially, while upsetting “deniers.”

Virtually no one takes a balanced perspective, measuring the needs of emerging nations for growth versus the desire of rich nations to live in more pleasant surroundings, or considers the whimsical and unavoidable changes in nature. Few talk to the fact that our planet is, and always has been, in continuous change – and that that is something that man cannot alter, but for which he should prepare.

Even expectations of what the report may say have polarized opponents. The Wall Street Journal suggested, for the first time since these reports began coming out in 1990, that this one will “dial back the alarm.” On the other hand, the UK’s The Guardian, wrote, “Scientists will this week issue their starkest warning yet about the mounting dangers of global warming.”

We know that the earth’s temperatures have changed radically over millions of years. Temperatures on earth can be measured, as can sea levels and the density and size of ice floes. There is no one who claims man has not altered his environment. The debate is solely about what relative impact he has had on a climate that is in constant flux.

While we do not know how life came to be or exactly how the earth was formed an estimated four billion years ago, we do know that it has warmed and cooled thousands of times over millions of years – from ice ages that produced glaciers in southern New England a mile thick, with snow and ice covering most of the planet, to temperatures of the Arctic Ocean reaching an estimated 73 degrees Fahrenheit. Both periods, understandably, were devastating to species. Nevertheless, life began, survived and has evolved. There are those who believe that the earth is still warming from the last ice age of about 20,000 years ago. Nothing happens uninterrupted, however. We know, for example, that the middle ages were warm. We also know that the end of the 18th Century and the first part of the 19th were unusually cold. Man was unlikely to have been the cause for either. There is much we do not know. We do not understand why temperatures have been constant for the last fifteen years, despite the fact that global carbon dioxide emissions were 32% higher in 2012 than in 2002. (Incidentally, during the same period emissions declined 8% in the U.S., due largely to a surge in shale gas production.)

In the life of the planet, man is a relatively recent arrival. He is the only species that has subverted nature for his own purposes. While man is criticized today for effecting climate change and damaging the environment, none of us would be alive today had not our ancestors trapped and slaughtered animals for food and clothing; cleared forests for warmth, housing and agriculture; mined the earth for minerals and energy, and diverted rivers for purposes of power and irrigation. Had his ancestors not done so, Al Gore would not have been able to fly on his private jet – which emits four times the emissions of a commercial jet – to Oslo to accept an undeserved Nobel Peace Prize for an error-filled movie, “An Inconvenient Truth.”

Unfortunately the subject of climate change has become a political football, with extremists uttering hyperboles on both sides. There are those who deny that man has had any affect, which is absurd given that global energy use is roughly 250 million barrels of oil equivalent per day, and as cities like Beijing and Mexico City become engulfed in man-induced smog. There are others, like Mr. Gore, who have made millions by inflicting fear on gullible people. While deniers are generally laughed out of the room, as “members” of the flat earth society, the latter, while equally wrong, have seized the moral high ground. With blinkered mainstream media and blindly allegiant Leftists behind him, Mr. Gore became a co-recipient of the 2007 Nobel Peace Prize. How many people know, though, that Mr. Gore has been the only recipient of the Nobel Prize whose award winning work, “An Inconvenient Truth” was ruled politically biased and negated by nine scientific errors by the British High Court prior to his receiving the prize? The other recipient that year, the IPCC, was also criticized for exaggeration.

The real damage caused by the bickering over past IPCC reports is that people are made to believe that if they recycle their (less than 20 ounce) soft drink containers, purchase a $75,000 Tesla Model S, and install solar panels the planet will heal. There is, moreover, the problem of disposing of used batteries and the cost of solar panels. Additionally, “feel-good” acts by (mostly) the wealthy divert attention from the needs of approximately 2.3 billion poverty-stricken people in emerging countries who have need for cheap energy. Membership in the flat earth society is not limited to deniers. It also for those who believe that man should be able to keep the planet from changing.

Robert Bryce, writing in Bloomberg a few days ago, made the point that global energy cost the world $5 trillion a year. According to Bjørn Lomborg, president of the Copenhagen Consensus Center in Washington, D.C. and author of The Skeptical Environmentalists, 81% of the world’s energy comes from fossil fuels. He adds, “In 2035, in the ‘most green’ scenario, we will get 79% from fossil fuels.” Energy transitions occur, if you will pardon the pun, glacially “over decades,” as Mr. Bryce notes, “even centuries.” The United States, the world’s largest economy, has been reducing their emissions for several years – before “the One” even promised to hold back the oceans and “heal the planet.” But we cannot expect the same of the less-developed world. Mr. Bryce quoted Roger Pielke, a professor of environmental studies in Colorado: Whenever policies “focused on economic growth confront policies focused on emission reduction, it is economic growth that will win out every time.” That is a fact that Al Gore should consider, as he sits smugly in the library of his 20,000 square foot house outside of Nashville, a house that consumes twenty times more energy than the average American house. On the other hand, another former politician, relaxing in his 4,000 square foot house in Crawford, Texas, a house which uses no fossil fuels, can take satisfaction in the knowledge that he has done more to save the planet than his former political competitor ever did, even though the former became rich selling fear, while the latter never bragged about what he had done.

The climate will never stop changing. No more than could Canute hold back the tide, not even “The One” can stop nature from changing. We will never live in a static world, nor would we want to. While I am a strong believer in a clean environment, it is not about saving the planet – nature is bigger, more powerful and can be more destructive than anything man has devised. Just ask those who were in the path of Katrina or Sandy. I believe in a cleaner environment because it is more pleasant and its one we can afford, as manifested in our reductions of carbon dioxide emissions. We live better than we did. The coal dust that enveloped New York City before World War II is gone, as is the smell from the slaughter houses in Elizabeth, New Jersey. The Connecticut River is cleaner than it was 200 years ago. Garbage from New York City no longer washes up on the Jersey shore, as it did in the 1970s. We are far better off, in this regard, than we had been. It is in our nature, as we become wealthier, to do so. We cannot forget, however, that our wealth is a consequence of economic success – the faster we grow, the more affordable are luxuries, like green energy. We must also recognize that changes in energy usages are evolutionary, not revolutionary. Also, keep in mind that the transition away from coal in New York City and the cleaning up of the Connecticut River happened years before the establishment of the EPA in 1970. It is man’s nature to prefer to live a cleaner, healthier life.

If we want to see people in Asia, Africa, Eastern Europe and the Middle East live similar lives, we must be willing to accept that their economic growth will be dependent on an abundance of cheap energy. The atmosphere may get dirtier before it gets cleaner. Those that deny others the opportunity they had are the real deniers. In the meantime, we appear to be doing our part. Things happen that we cannot prevent; for that we should always be prepared. To deny nature is to be a foolish denier.

The views expressed on AustrianCenter.com are not necessarily those of the Austrian Economics Center.
hayek_admin2019-01-14T06:43:06+01:00