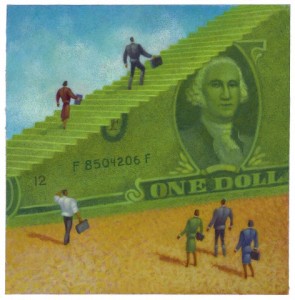 The problem with generational-long trends is that five years doesn’t make much of a difference to the historian looking back, but those years can seem endless for the one who made a bad bet, an example being those who thought interest rates would move higher.

In his recent Grant’s  Interest Rate Observer , James Grant traces the rise and fall of interest rates over the past 150 years. The cycles are long. Rates fell  for the 35 years following the Civil War, then rose for 20 years. In 1920 they began falling, and did so through the end of World War II, when they began rising again. That trend ended with the Ten-Year Treasury yielding 15.3% in September, 1981.

Percy Bysshe Shelley ends his “Ode to the West Wind” with the well known line that is filled with hope, “O wind, if  Winter comes, can Spring be far behind?” As Mr. Grant points out, spring came to the bond market in 1981 and is closing in on its 32nd  birthday. Those three decades would suggest that not only did spring arrive, but it suggests we must be in the waning days of summer, awaiting the onslaught of a chilly autumn. Can the rally in bonds extend for another four or five year? Anything is possible. There may be an Indian summer, but we know that this too will end. For the one constant common to all markets is change. But picking the apogee and nadir’s of trends is a job for clairvoyants, not mortals, and certainly not pundits
like me who profess to no such expertise.

In November, 2008 the Federal Reserve implemented its first round of quantitative easing. Te yield on the Ten-Year had already fallen to 2.96% (from 3.83% at the end of September.) Concern about the possible inflationary consequences of the Fed’s purchases pushed bond prices lower; so hat just over a year later, in December of 2009, the yield on the Ten-Year was 3.84%. However, once markets realized that the Fed would keep its foot on the accelerator, bond prices moved up and yields fell.

With the economy still sluggish, and despite stocks and bonds having  rallied, the Fed, in the summer of 2010 instituted QE 2. Again, the first response was for rates to rise and bond prices to fall. The yield  on the same bond was 2.48% that August. By March of 2011, it had risen to 3.45%. And still the economy did not respond as expected; but stocks continued to do well and so did bonds, after initially faltering. Then last October, with unemployment still around 8% and with the Ten-Year now yielding 1.67%, the Fed began QE 3. The initial response has been the same. Treasury rates are nominally higher, and unemployment has dipped, but the numbers o employed workers remains substantially below where they were when  the recession began. The bet that most pundits make is that the process will continue as it did before.

While Treasury yields have fallen 40% since QE 1 began, the yield on High Yield bonds have fallen 67%, indicating a willingness to assume more risk in the illusive search for yield.

Low interest rates are double-edged. As Bill Gross of PIMCO writes in his May “Investment Outlook,” “The government’sgain, however, is the saver’s loss.” ‘Government’ is simply a euphemism for taxpayers. Thus what we are seeing is a perverse wealth transfer, from the elderly and retired to Wall Street. For the principal beneficiaries of low interest rates have been the TBTF banks and buyers of commodities, bonds and stocks. In his eponymous news letter, Mr. Grant points out that, contrary to the prognostications of government officials and most market commentators, there has been “rip-roaring inflation in the price of income. The cost of retirement…has gone through the roof.” In 2002, a million dollars invested in Ten-Year Treasuries produced $62,000. Today, to generate the same level of income, the retiree would need about $3.7 million. Low returns in “safe”securities have forced investors into riskier securities. For the individual whose 6% Ten-Year bonds are maturing, and now needs to
replace the income, must now buy junk bonds.

As mentioned above, the Federal Reserve is in its third iteration of quantitative easing. They have been purchasing $85 billion in Treasuries and asset backed mortgages each month, roughly the annual cost of sequester. In purchasing these securities, the Fed is injecting money into the economy. “The money,” as Dallas Fed president Richard Fisher recently noted, “should, theoretically, be put to use: by banks lending to consumers and businesses that will expand employment, and by investors who, rediscounting valuations in the fixed income and equity markets, will drive those markets higher, creating a wealth effect.” The latter has worked, as we have seen in stock and bond indices, while the former, other than aiding the housing market, has been less successful. The
irony is that the stock market is caught in a pushmi-pullyu enigma.

Equity holders hope for economic growth to surge, driving earnings, but at the same time realize that if that happens, interest rates will rise, knocking out a critical support for stocks.

Markets are  self-correcting mechanisms. But no one can forecast peaks, valleys or timing. And, perhaps more importantly, no one can control the rise in rates when that happens. Nevertheless, the threat of rising rates hangs over taxpayers and investors alike, as a sword of Damocles. Total federal debt is about $16.8 trillion, of which the public portion is about $11.7 trillion. In the fed budget, no allowance is made for the accumulated interest rate cost on government-owned debt. The average interest rate on the public portion of the debt is just under 2%.

In contrast, a dozen years ago the average rate cost was 5.3%. In April 1997, the yield on the Ten-Year was 6.7%; today it is 1.77%. Interest expenseon the public portion of the debt approximates $223 billion, or roughly6% of the expected $3.7 trillion 2013 budget. Should rates revert to the 2001 level, interest costs would consume 16% of the budget. If we went back to the mid 1990s, the cost would be even higher. This is an event that will happen. What we don’t know is when. But it is this indisputable fact that renders so serious the need to reduce debt.

What is going on in the Treasury markets violate basic economic rules of supply and demand. When the market is flooded with any product, the price usually goes lower. Not so in the brave new world of fiat currencies. When currencies were tied to a commodity like gold, they could only be issued in proportion to the amount of gold held by the central bank. Fiat currencies have no such restraint, which one would think might make them less valuable, yet the proliferation of them, over the course of all three quantitative easing programs has only made them dearer. Nevertheless, it should not be surprising, despite the U.S. being seen as the best horse in a field of nags, that the dollar is only one percent higher than it was at the end of December, 2008.

As Warren Buffett wrote in this year’s letter to shareholders, “… every tomorrow has been uncertain. America’s destiny, however, has always been clear: ever-increasing abundance.” That is likely to be true, but timing is something Mr. Buffett worries less about than do most. Complacency does not appear to this observer to be a concern in equity markets, but four years into a bull run and now selling at 11.5X estimates – estimates that have been coming down – it is far from the bargain it once was. But the bond market seems different. Many prominent and highly successful bond managers have expressed reservations, but claim to be still playing the game. The question becomes: will they all be able to get off the speeding train unhurt before it inevitably reaches a point of no return? I don’t pretend to have the answers, but these are questions worth asking; for complacency is always the enemy of investors.

This memorandum has been prepared as a matter of general information. The accuracy of the material submitted, though obtained from sources believed reliable, is not guaranteed by us and may not be complete. The opinions and estimates expressed in this memorandum accurately reflect the personal view(s) of the analyst(s) covering the subject securities on the original date the memorandum was issued, but are subject to change without notice. Analyst compensation at our firm is not directly related to any specific recommendation or views contained in this research. The analyst, officers and employees ofthis firm may at times have a position in the securities mentioned herein.

The views expressed on AustrianCenter.com are not necessarily those of the Austrian Economics Center.
hayek_admin2019-01-14T06:48:55+01:00