Complacency, Deflationary Bulls, and Inflationary Bears: Japanification in an Era when the Enemy of my Enemy is Still my Enemy

Lack of foresight is not a tactical mistake. It is a dangerous strategic error whose price is paid mainly by innocents over a long period of time. In April 1917, the government of Germany found an “ally” in the person of Vladimir Lenin. Lenin wanted to overthrow the Russian government and the Kaiser’s government was losing the war in which the Russian government was involved. Lenin promised the German government a revolution that would take Russia out of World War I. The enemy of the Menshevik and of the Kerensky government became Kaiser’s friend. Lenin was sneaked into Russia (from Switzerland where he was exiled) with the help (including operating funds) of the German army. Lenin succeeded in his revolution, and for a short period of time Germany got what it wanted (Lenin withdrew the Russian army from WWI). However, that was for a brief period of time. When Lenin refused to give Germany the lands of Poland, Ukraine and the Baltic nations, the goodwill between Russia and Germany melted down and the rest is history including the role that the German Communist Party played in Hitler’s victory in 1933.

Too many analysts and professionals in the field expect a correction to the tune 10-15%. It usually does not happen when the majority expects it. The market requires a refiner’s fire as we wrote last week. The monetary manipulations have been capable of keeping the yield on the ten-year Treasury below 1.90-2.0%. The absence of a bond market shock feeds the frenzy of yield seeking. As long as the era of excess liquidity does not end, the refiner’s fire cannot purify the markets. Hence, we end up by the oxymoron of fully invested bears (deflationary bulls) that can perpetuate bubbles as long as complacency prevails.

In such an environment, and as we enter the final quarter of the year, ZIRP (zero interest rate policy) and NIRP (negative interest rate policy) policies of central authorities add to a lethargy that commits markets to a complacent mode where the enemy called “deflation” is fought with such animosity that could possibly blind investors from an incoming enemy called inflationary bear. The enemy of enemy is still my enemy.

The era of excessive debt, accommodating monetary manipulations (which cannot add to productivity), and asset price inflation (via the more than $12 trillion spending by central banks in buying paper “assets”) that represses interest rates is also known as Japanification. Here is a graph of this era: 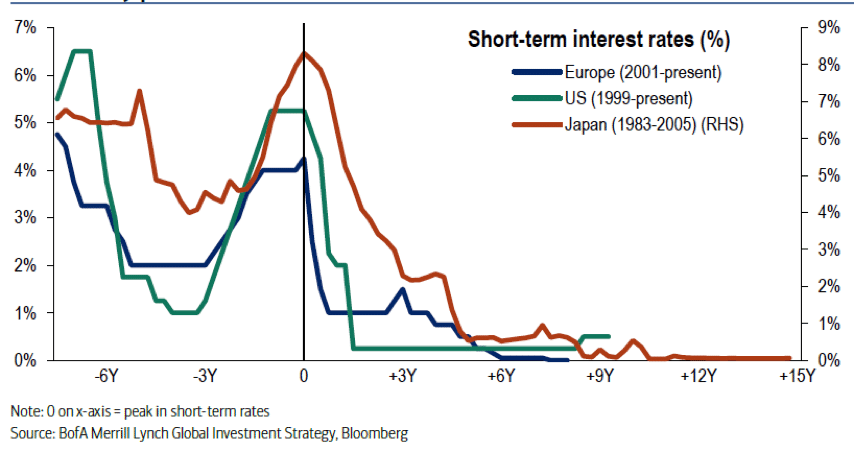 We are just wondering if a contrarian element needs to be infused into portfolios where inflationary bears (precious metals, commodities, energy, among others) could co-exist with some deflationary bulls. Investors may want to start thinking about reallocating weights if a revaluation of paper asset growth plays (health care, tech, staples, etc.) is underway, especially if the baton is passed from monetary to fiscal stimuli.

The election on November 8th may also force new thinking regarding asset allocation, weights, and capital deployment. No matter what happens between now and the election, it might be a good thing to question the old saying that “the enemy of my enemy is my friend.”

The views expressed on AustrianCenter.com are not necessarily those of the Austrian Economics Center.
Federico Fernández2019-01-14T05:54:55+01:00