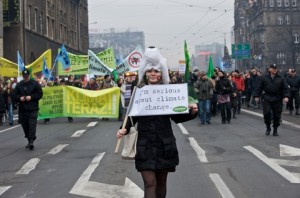 Protesters take to the streets of Poland, during the COP 14 Climate Change
Image by © Dreamstime

Hornswoggle is a word I have always liked. It is a verb meaning to bamboozle or to dupe. While its origin is considered “unknown,” the word is generally thought to be native to America. The word is said to date to the early 19th Century, but it does not appear in the 1828 Webster’s Dictionary. A man or a woman with an unfaithful spouse can be described as having been hornswoggled. It was the kind of colorful word we liked in New Hampshire, where we never trusted city folk who tried to sell us something we didn’t want or need. We suspected their motivation. We didn’t mind being the hornswoggler but we didn’t want to be the hornswogglee.

Glancing through the “Summary for Policymakers” just published by the Intergovernmental Panel on Climate Change (IPCC), the word ‘hornswoggle’ came to mind. While the IPCC, according to its own principles, is a policy-neutral organization, its head Rajendra Pachauri, in an interview last September, said, “Humanity has pushed the climate system to the brink.” He added, “We need to transition away from fossil fuels.” With the release of the document a week ago, and sounding just a mite less patronizing, he said, “Adaption alone is not going to solve the problem and we need mitigation at the global level.”

In some respects the IPCC has become its own worst enemy. The problem with government (and non-government) bureaucracies is that they develop lives of their own. Jobs and careers, in the case of the IPCC, depend on man-made influences on climate change being the principal cause. Such agencies also serve as vehicles for politically correct politicians.

But not all agreed with the inflexible tone of the report. Richard Tol, a professor of economics at the University of Sussex and an expert on climate change removed his name from the Summary Report, despite having written one chapter and contributed to two others. He did not feel that the Report accurately reflected persistent changes in technology, particularly as it pertains to crop productivity, and it downplayed the benefits of global warming, as it pertains to the reductions in deaths from cold stress and in crop yields. Professor Tol believes in climate change, but takes exception with the adamant tone of the Report.

Professor Tol’s skepticism was matched by a paper published in a recent edition of “American Journal of Agricultural Economics,” entitled Information Manipulation and Climate Agreements. In it, two professors of economics, Fuhai Hong and Xiaojing Zhao note how environmental groups and their media cohorts deliberately exaggerate for the “good of the cause.” In 1989, the late Stanford professor for environmental studies Stephen Schneider wrote: “…we have to offer up scary scenarios, make simplified, dramatic statements, and make little mention of any doubts we might have.” In a 2003 issue of “National Science,” NASA global warming scientist James Hanson conceded a similar attitude: that the use of “extreme scenarios” to dramatize global warming “may have been appropriate at one time” to drive the public’s attention to the issue.

Björn Lomborg, the Danish professor and former director of the Environmental Assessment Institute in Copenhagen wrote last fall: “We should accept that there is global warming. But we should also accept that current policies are costly and have little upside.” “It (global warming) is becoming a religion, and religions don’t worry too much about facts,” says James Lovelock, a 94-year-old retired UK scientist, famous for his Gaia hypothesis that Earth is a self-regulating, single organism. In his 2006 book, Revenge of Gaia, he wrote: “It’s just as silly to be a [climate] denier as it is to be a believer.” He argues that fracking and nuclear should power the UK, not windfarms.

While all of these people believe that climate change is for real – that the Earth is warming and that man has been part of the cause – they disagree in terms of the magnitude of the change and to the extent of man’s culpability. We all exaggerate to make points. But most of us do not do so with the sense of sanctimonious righteousness common to those in the business of warning us about man’s effect on global warming. For a few, like Al Gore and Michael Moore, exaggerating fears of global warming provided a venue to enormous personal wealth, while using taxpayer dollars to fund start-up costs. Is there any wonder so many of us feel hornswoggled?

The Summary Report issued dire warnings on the dangers from man-made global warming. It will “devastate” food supplies, cause “mass extinctions of plants and animals, worsen droughts, and raise the risk of wars over resources.” The headline in the New York Times expressed their editorial bias: “Worst is to Come.” Without swift and decisive action, the Earth will “almost surely face centuries of climbing temperatures, rising seas, species loss and dwindling agricultural yields,” the paper editorialized. The Summary Report was a “call to action” noted the Los Angeles Times. There was little in the report that discussed an evolving and ever-changing Earth that has warmed and cooled over the millennia. There was little in the report that would help governments and individuals prepare for what will be inevitable changes to the Earth’s climate over the next several decades.

It is not that man has had no affect on climate. He most assuredly has. The question is to what extent. It is too simplistic to say that carbon dioxide or methane emissions are solely responsible for global warming (or cooling). Globally, coal consumption in 2000 was 5.3 billion metric tons; in 2011, it was 8.1 billion metric tons. Yet temperatures have remained pretty constant over the past fifteen years. There is much about the world we still do not understand. More dangerous than the ignorant are those who believe they know what they don’t know. Perversely, the decision by Mr. Obama’s Environmental Protection Agency (EPA) to ban the use of coal in new, green-field power generating plants in the U.S. has increased the likelihood that more coal will be used for that purpose in China and India, as the commodity has become cheaper. Keep in mind, inexpensive food, energy and shelter are more important to people in developing and emerging nations than environmental concerns.

That our colleges and universities have become forums to promote political ideology is a well known fact. A few days ago, the New York Times wrote uncritically about courses on global warming being taught at the University of Oregon. The course is entitled, “The Cultures of Climate Change.” Its goal is not to marshal evidence for climate change as a human-caused crisis, or to measure its effects – the reality and severity of it are taken as given – but how to think about it, prepare for it and respond to it.” Instead of using scientific texts, the class will use films, fiction, poetry and photography. Obviously, the purpose is indoctrination, not instruction.

Forty years ago climatologists were convinced the Earth was cooling, ice-caps were getting larger and arable lands were lessening. For most of the past four decades they have been worried that the Earth is warming, with ice-caps melting and impairments to agriculture. As their rhetoric soared to match their expectations of rising temperatures, the Earth’s temperatures began to moderate. So, now their mantra is simply “climate change,” allowing them to be right no matter which way the thermometer moves. Most of us would agree that man has had an effect. Whether he has tilted the balance toward cooling, as was believed in the 1970s, or toward warming, as is currently believed, no one can tell for certain. Before we get overly excited about man’s effect it is worth remembering that all creatures have some effect on their environment. There is nothing permanent about life on Africa’s savannahs anymore than there is about life on the marshes that separate my house from the Connecticut River. Life is in constant motion. Everything alive must die at some point.

What we need from the IPCC is a balance that recognizes that the need to change must take into consideration the costs of that change – especially for those in developing parts of the world. We need to prepare to adapt to inevitable change. We need less ideology and more common sense. Maine Governor Paul LePage, in an op-ed in last Friday’s Wall Street Journal, noted how an EPA mandate requiring that all new wood stoves have reduced emissions immediately would, besides putting hundreds of people out of work, worsen future emissions from wood stoves in Maine. The exorbitant costs of the new stoves would mean that all but the very wealthy would continue to use their current stoves. In their condescending attitudes, what rich liberals like Mr. Obama and bureaucracies like the EPA never consider is that regulations are regressive in their economic consequences.

The IPCC reminds me of the boy who cried wolf. When the wolf didn’t appear, the people’s guard went down; so that when he did appear, the sheep were eaten. With an ideological focus on prevention, rather than adaption, the risk is that we might not change our habits when the climate does change significantly. In letting the argument be hi-jacked by climate extremists like Mr. Moore, Mr. Gore, the editors of the New York Times and the Los Angeles Times, and the professor at the University of Oregon, we are being hornswoggled by climate fanatics – to ours and the world’s detriment.