Since the presidential election equity funds have experienced four consecutive weeks of inflows, while bond funds have been experiencing outflows. This makes sense if we consider the anticipated lower tax rates for corporations, and the incoming administration’s plans for deregulation, infrastructure and deficit spending. The estimates are that a corporate tax cut from the current 35% rate to a rate of about 20%, will boost earnings per share by about 7%.

Hence, the consensus estimates that Earnings per Share (EPS) and the S&P 500 could rise by 7% in 2017. At the same time, bond outflows and rising yields could be justified given the anticipated government spending and the tightening of monetary policy.

– Repatriation of cash from overseas

When we take into account the above factors, we may reach a conclusion that EPS could rise by double digits. However, such expectation needs to be adjusted for time lags (between designing, executing, and experiencing the effects of a legislation), possible stronger dollar which reduce overseas profits when repatriated, rising corporate indebtedness that could slowdown buybacks (as shown below), rising interest rates, as well as cushioning for possible financial troubles in the EU and/or China and of course for the unexpected. 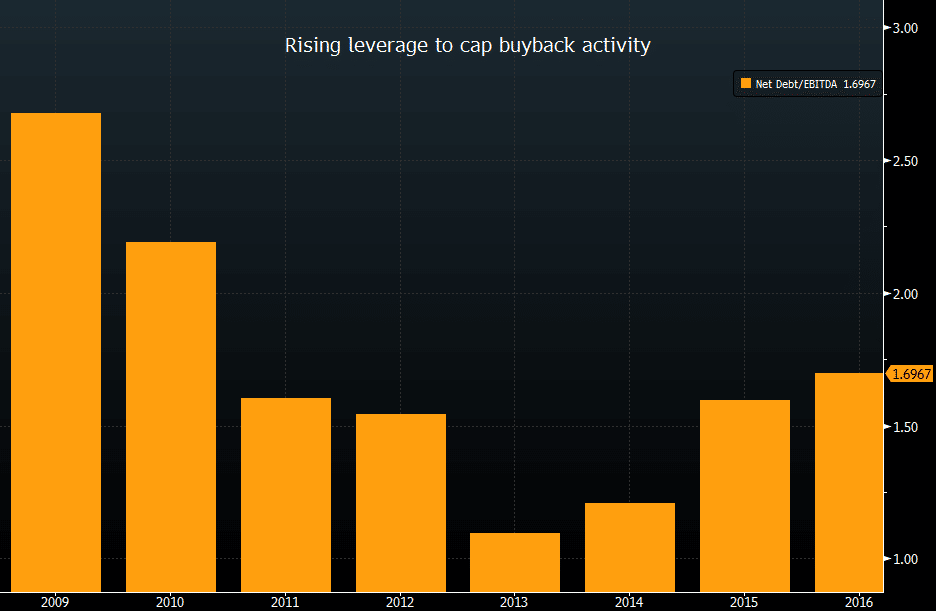 One of the main concerns that we have and which makes the cloud of risks and uncertainties thicker is the fact that the cyclically adjusted P/E ratio (a.k.a. Shiller Ratio) stands as of today at a pretty high level, as shown below. A monetary policy that tightens rates may be conducive to a correction, and of course the fact that it stands so high is troubling by itself.

The decision by the Fed to raise rates by 25 bps and to indicate three possible short term rate increases in 2017, is healthy and by no means does it imply policy normalization given that developed countries cannot afford normal long term interest rates given the amount of debt that they face, let alone the still unaddressed issues of unfunded liabilities and the derivatives structure.

In conclusion, we are also inclined to believe that for the immediate term the tailwinds will prevail over the headwinds, and therefore we expect the equities market to experience gains. To that we should also add that EU equities that trade at lower multiples and which have not experienced the gains that US equities have had this year, are also positioned for gains especially after Tuesday’s decision by the European Banking Authority (EBA) to cut by almost 50% the anticipated amount that EU banks need to raise in order to enhance their capital requirements.

The views expressed on AustrianCenter.com are not necessarily those of the Austrian Economics Center.
Federico Fernández2019-01-14T05:54:30+01:00