Could Gold Become Money Once Again? 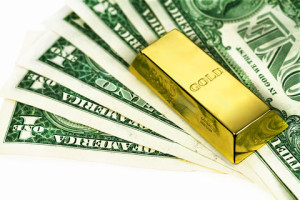 For these reasons, gold has been widely used throughout the world as an instrument for monetary exchange; either by issuance and recognition of gold coins or other bare metal quantities, or through gold-convertible paper instruments by establishing gold standards in which the total value of issued money is represented in a store of gold reserves.

The US moved from a bimetallic gold and silver standard to a monometallic gold standard on March 14, 1900. This gold standard continued until the beginning of World War I, when it was suspended, reinstated, and suspended yet again before eventually being reinstated for a second time. The United States gold standard finally ended for good in 1933 when President Franklin D Roosevelt declared private ownership of gold to be illegal, except in the case of jewellery.

After World War II, the gold standard was replaced by a system of convertible currency with the Bretton Woods agreement. The Bretton Woods system, described as a ’grotesque parody of a gold standard’1 by Murray Rothbard, allowed foreign governments to continue to sell their gold to the United States Treasury at a price of $35 per troy ounce from its inception in 1946 until President Richard Nixon ended the program in 1971; enabling gold to be traded at fluctuating market prices, rather than the fixed price of $35 per troy ounce.

This marked the end of the gold standard on a global level, as no major economic system has employed the gold standard since that time. Gold standards and the direct convertibility of currencies to gold have now been completely abandoned by world governments, being replaced by fiat currency in their stead.

Since the end of the Bretton Woods system in 1971, the United States has operated on a fiat currency, which is not backed by any precious metal or other commodity. This form of commerce allows for fluctuations in the global currency market which were not possible under the gold standard, since the gold standard established a set amount of gold that could be purchased with a country’s currency, it also set the value of that currency. This means that countries no longer enjoy monetary value stability and the corresponding stability of economic growth.

This was also the last time gold operated as money – that is, disregarding some negligible cases. The reason gold could be considered money up until this time is because under the gold standard and the Bretton Woods system – essentially a de facto gold standard –, paper money was merely acting as a money-substitute, described best by von Mises as

‘’Claims to a definite amount of money, payable and redeemable on demand, against a debtor about whose solvency and willingness to pay there does not prevail the slightest doubt, render to the individual all the services money can render, provided that all parties with whom he could possibly transact business are perfectly familiar with these essential qualities of the claims concerned: daily maturity and undoubted solvency and willingness to pay on the part of the debtor’’2.

Despite gold’s suitability as a medium of exchange, its efficacy as money had been, and continues to be, called into question, with John Maynard Keynes even going so far as to describe it as a ‘barbarous relic’3. The quote is from 1924, and it was followed by a campaign, nearly half a century in length, to demonetize gold.

This campaign made significant progress in 1933, but the campaign did not finally end until its goal was achieved fully in 1971.

Despite gold no longer maintaining the status of money, it continues to hold all the traits needed for a commodity to become money; and has all the potential to become money once again.

The most salient feature a commodity must encompass in order to have the ability to be transformed into a currency is exchange-value, rather than just direct-use value.

A commodity’s direct use-value is, as the name suggests, the value derived from the direct use of the commodity. Exchange-value, on the other hand, is that portion of value a commodity has obtained from that commodity owner’s conjecture about the sum of goods that can be acquired by exchanging that commodity.

Ultimately, a commodity can only become money when a portion of its value is derived from the prospect of exchanging it, i.e., it contains exchange value.

Gold would seem to fit the bill in this respect, with investors trading gold devoid any intention of using its services directly by, for example, turning it into jewellery, etc. Nevertheless, gold would seem to hold even more traits – edging it closer to achieving currency status – than just containing an insignificant amount of exchange-value.

Nonetheless, because money emerges spontaneously from the market, we would expect a commodity to slowly increase in absolute value – due to its increasing exchange value – as it gradually evolves into a medium of exchange.

As it stands, gold’s value is at a relatively high level when compared to past performance. Admittedly, some of this value was due to bubble activity, however, despite a sizable correction, gold’s price seems to have stabilised and remains at a high level.

In 2011 former Federal Reserve Chairman, Ben Bernanke, had the question of whether or not gold was still money put to him by Congressman Ron Paul. Bernanke responded in the negative and was correct in his assertion. However, he went on to claim the reason the Federal Reserve held its reserves in gold rather than diamonds was tradition. A more likely reason for Federal reserves being denominated in gold is gold’s potential as money.

Gold would still appear to possess all the potential to become money once again, and although gold’s efficacy as money can and has been called into question, these are mostly baseless criticisms confusing money’s role. Money should operate as a medium of exchange and not a government tool used to create growth.

The views expressed on AustrianCenter.com are not necessarily those of the Austrian Economics Center.
hayek_admin2019-01-14T06:13:51+01:00