Over the course of the last couple of weeks, we have read reports that credit facilities are rising, production is on the upswing, Chinese tremors are subsiding, and an overall sense of calmness is returning into the markets. We do not dispute these facts but we take a different view of how those facts need to be interpreted and what it means for the markets.

To start, I am afraid that the data are read without the proper context. Maybe in our desire to wipe out the bad memories of a very bad start of the year for the markets, we neglect the series of challenges, risks, and threats that surround the markets, which we outlined in a recent commentary (commentary).

The most recent data on credit creation, loans, and similar monetary conditions – as reported by Capital Economics and shown below – point to signs that money growth translates into higher credit facilities for corporations and hence credit is being revitalized.

However, the hope that such credit generation will translate into improved output and higher median incomes is misguided for three reasons: First, it neglects the series of risks and threats we have talked about in the recent past; second the credit cycle can no longer lead the business cycle since the marginal efficiency of monetary measures has run its course and now faces not just diminishing returns but possibly negligible if not negative returns to scale; and third, the flow of lending (a.k.a. credit impulse), points to a slowdown in capital investments, as shown below. 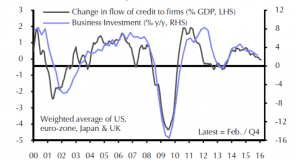 This last reason is very important because the credit data reported are lagging indicators, while the credit impulse is considered a leading indicator. Let us see what happened to the change in the flow of credit to developed countries’ firms in 2006-‘7. As shown above, it collapsed. Consequently, business investment collapsed starting in 2008 and the markets experienced their worst moments since the Great Depression.

In our limited understanding of things, the inability to address the main causes of the financial crisis along with policy indecisiveness/impotence to take bold steps and make a leap forward, has generated an environment of stagnation that undermines growth potential. It is not the ability to consume and/or the ability to borrow, but rather the ability to produce, innovate, and adopt that advance growth and incomes.

The unfortunate thing is that financialization pushed the wrong priorities and agendas and hence productivity (the missing link) has been sluggish as shown below. 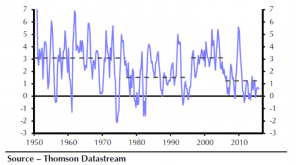 The significant slowdown in productivity growth is bad news for GDP growth and consequently for earnings. Based on the above we anticipate that the growth rate will start experiencing downward pressure and, as both economic and geopolitical risks rise, market volatility will be riding along a path of an upswing, underscoring an environment where prudent hedging will be necessary.

The views expressed on AustrianCenter.com are not necessarily those of the Austrian Economics Center.
hayek_admin2019-01-14T05:57:01+01:00