Yesterday’s decision by the Japanese Central Bank not to extend its monetary easing, strengthened the Yen and significantly pressured the Nikkei Index. It has been obvious in the last several months that there is a strong inverse correlation between the Yen and the Japanese stock market. We could also see that there is a strong negative (inverse) correlation between the Euro/Canadian Dollar rate and the FTSE 100. As the Canadian Dollar weakens against the Euro, the London benchmark is dragged down due to the fact that the Canadian economy is commodity-based.

The absence of fundamental growth dynamics in the global economy and the hangover from debt has eventually left the central banks as “the only game in town” as Mohamed El-Erian so correctly points out in his latest book by the same title. My only concern is that as central banks run out of options their ability to keep kicking the can down the road may also have been experience diminishing marginal returns.

The number of sovereign bonds with negative yields has ballooned to over $10 trillion, which in turn pushes investors to a game of hunting for yields. As the game unfolds, asset prices go on the upswing creating imbalances and capital is misallocated. This kind of market segmentation will have medium and long term consequences which are not expected to be pleasant.

The following graph shows the countries with the negative yields along with the amounts involved. 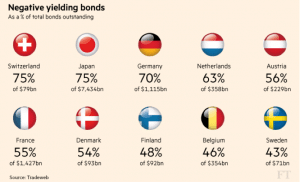 Over the course of the last two-three months, the US dollar has weakened against the Euro and the Yen. However, such weakness could only be considered temporary. We are of the opinion that the Fed will raise rates at least twice this year, and as rates increase, the greenback will strengthen against those two currencies and possibly against a number of other currencies. We also see that monetary policy divergence between the US Fed, the ECB and the Central Bank of Japan will continue in the foreseeable future (with the latter two expanding their quantitative easing measures).

Therefore, as a divergent monetary policy across continents unfolds, market waves are expected to generate. Those waves could take markets (both fixed income and equities) into a roller coaster. The roller coaster potentially will see rates going through a wild ride while volatility will rise. As banks’ pre-tax profits are being squeezed (see graph below), the environment will become fertile for breaking up the big banks. 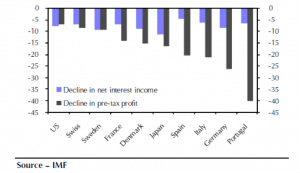 The overall credit expansion experienced over the last twelve months in both developed and emerging markets has the potential of sustaining an equities upswing and mesmerizing market participants to the point that some experience symptoms of anesthesia in their reaction.

It would be useful to remember that eventually Odysseus returns home in Ithaca. We just need to watch what disguise he will use, and hopefully we will be able to recognize him.

The views expressed on AustrianCenter.com are not necessarily those of the Austrian Economics Center.
hayek_admin2019-01-14T05:56:51+01:00