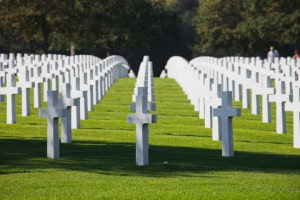 What a difference a few decades make. On Saturday, in a White House Rose Garden ceremony, with the parents of Sergeant Bowe Bergdahl by his side, President Obama announced that their son had been released earlier that day. Today, Mr. Obama is in Normandy to celebrate the 70th anniversary of the invasion that liberated Europe from the Nazi menace. He is there to honor the thousands of American, British and Canadian troops who stormed the beaches that morning, so many years ago, and the approximately 2500 who died that day..

In contrast to the brave men who, laden with weapons and backpacks, fought their way up the beaches to the base of the heights on which the Germans were entrenched, Sergeant Bergdahl, from what we know, was not a war hero, despite what Susan Rice said on Sunday. He wandered off his base. Even I, who spent minimal time in the army, know that leaving one’s post is desertion, especially in time of war with the enemy in close proximity. I was also taught in basic training that your life depended on your buddies. You had to trust them. How could a fellow soldier trust one who wandered away because he felt like it? Why did Bowe Bergdahl walk off the base? No one seems to know, though many of his comrades have expressed indignation in unflattering terms, as did the Army, which means that the White House knew as well that this man was no hero. We know he wasn’t captured in battle by the Taliban, again despite what Ms. Rice said on that same Sunday talk show. It is more likely, as one of the women who knew him as a ballet dancer suggested, because he liked to meditate…and felt the need to do so alone, thus he went for a walk. Had allied soldiers felt so inclined in 1944, Hitler’s Third Reich would be almost 80 years into its thousand-year life.

Saving Sergeant Bergdahl may have been the right decision; as the soldiers’ code says we do not abandon our men and women in uniform. But exchanging him for five Taliban thugs who are cut from the same cloth as the terrorists that brought down New York’s Twin Towers, damaged the Pentagon, ploughed up a Pennsylvania field and killed more people in less than an hour than the Germans were able to do during the entire day of June 6, 1944, is an outrage!

In the pre-dawn hours of June 6, 1944, 6,939 ships, manned by 195,000 naval personnel and carrying 156,000 allied troops arrived off the coast of Normandy. “It was,” as Victor Davis Hanson wrote recently, “the largest amphibious invasion of Europe since the Persian King Xerxes invaded Greece in 480 B.C.” By day’s end, casualties, including dead, wounded and missing-in-action would number 6,036. Four men earned Medals of Honor that day, including two who died. One of the four who survived was Brigadier General Theodore Roosevelt, Jr. By the end of the month, another eight Medals of Honor had been won.

The night before leaving England, General Eisenhower spoke to the troops – American, British and Canadian – who were preparing to assault the almost fifty miles of French coastline, which was their mission: “We will accept nothing less than full victory.” How confident were those words, and how different from those of our current Commander in Chief at West Point a week ago: “When crises arise that stir our conscience or put the world in a more dangerous direction, we should not go it alone.”

Sixteen million men and women put on uniforms during the course of the Second World War, among them were two and a half million African Americans who registered for the draft – and did so in a country at a time when the services were still segregated. One hundred and twenty-five thousand African-Americans served honorably overseas, including the famed Tuskegee airmen. Seven were awarded the Medal of Honor. They enlisted because they believed in the promise of an America that at that time did not fully believe in or respect them. Yet they were willing to put their lives on the line for an ideal, which now, seventy years later, has been largely – yet not completely – fulfilled. Our men and women in uniform still believe in that ideal, and are willing to pay the ultimate price, but can we say the same regarding our political leaders?

As President Obama said at West Point, and as George W. Bush had said many times earlier, our best friends are democracies and their proliferation is the best way of securing the safety of Americans. Yet, our too-quick exit from Iraq and our public announcement as to when we will leave Afghanistan basically assures that any hopes of democracies in those cradles that foment and encourage terrorism will come to naught. Three thousand Americans and other nationalities died that September morning almost thirteen years ago; almost seven thousand American soldiers have died subsequently. For what? Is the world safer from terrorists today than it was on September 10, 2001? Does the releasing of five of the world’s worst killers help or hurt the cause for peace? President Obama came into office promising to end the wars in Iraq and Afghanistan by the time his second term is up. He will succeed in his promise, but he will not have done so by being victorious, and he will not have made the world safer.

George Bush, for all his faults, was far more realistic about the enemy we faced and how long the war would last. He told the people that the war would not be won on his watch, or on the watch of his successor, but that it would take decades, because the terrorists were stateless and had no stake in the world as it is. Being stateless, terrorists require some governments give them sanctuary. That does not mean that every nation that harbors terrorists need be invaded, but they should be treated like the enemy they are and kept isolated.

The soldiers who landed on the beaches seventy years ago – Omaha, Utah, Gold, Juno and Sword – were brave men who fought an evil that was easily described. The Continent had been under Nazi control for four years. The roughly 73,000 Americans who crawled up those beaches were 3,000 and more miles from home. They fought for the idea of democracy and recognized that its siren call is universal. They knew that freedom is not free.

Eleven months later the war in Europe was over. The Japanese would continue to fight on for another three and a half months before, like Germany, surrendering unconditionally. Thousands more would die. But the success of what those soldiers achieved can be seen in the democracies that have sprouted where tyranny once reigned – in countries where American troops stayed on over the decades, changing their mission from warrior to support.

It should not be lost on anyone that our nation’s most ill-treated citizens in 1944 still preferred the United States to all other countries. We should acknowledge we are still far from perfect. But we should also keep in mind that inequalities in terms of education and opportunity have vastly improved. No soldier who crossed those beaches under machine-gun fire could have imagined that, seventy years later, an African –American would have been his Commander in Chief.

Inequalities in outcomes, especially in terms of wealth and income, will always be with us, but it is equalities of opportunity, especially in education, that should be our focus – something denied women and gays in fundamental Islamic regimes. If we can successfully address that persistent problem, inequalities will naturally abate. There is no reason to penalize success, just as there is no excuse to harp on our imperfections. There is every reason to celebrate who we are and the good we have brought to so much of the world.

We will always remember 9/11, but there will be no celebration regarding Iraq or Afghanistan seventy years hence. Whether we were right to invade those two countries initially is not so much the point. We did. It is the way we left that will be remembered and not, I would guess, with affection or thanks.

But today we hono
r those brave young men who stormed those beaches in Normandy on June 6, 1944, so that liberty might prevail where tyranny had ruled. By evening, the troops secured a foothold. Eleven months later, the war in Europe was over. Seventy years on, Germany is democratic and their economy is the fourth largest in the world. (Japan, the other half of the Axis powers is now third.) And it is all because young men were willing to give their lives, that future generations might live in freedom and peace.

God bless those soldiers and their leaders, both political and military, for the sacrifices they made that grey morning seventy years ago today.

The views expressed on AustrianCenter.com are not necessarily those of the Austrian Economics Center.
hayek_admin2019-01-14T06:17:20+01:00