Dancing with Lemmings: The Migration of Crowded Trades

We live in an epoch where volatility is becoming a trademark. We try to discover causes for this and all we are successful in doing is reshuffling symptoms. Like lemmings we follow a herd mentality that resembles a dance of morons. And as we are dancing along the rivers of uncertainty, in the midst of a cacophony that is perceived as a new kind of symphony, a suicidal mode arises that can push us all over the cliff.

But isn’t that what lemmings are supposed to be doing?

Here are two graphs of this herd mentality that has created extreme positions sustained by unconventional policies that tie the markets not to the locomotive of liberty but to the bandwagon of central planning. The first graph below is the Shanghai Composite Index.

As shown – and as I explained a few weeks ago – the gains of over 150% in the last year have no reasonable or fundamental base. They simply represent a herd mentality supported by central planning. We all know what the end result is of centrally planning economic activity…

The second graph shows the yield on a ten-year German bond, again over the course of the last year.

We can clearly see the dramatic reversal of the irrational drive to a yield of 0.05 until about five weeks ago. Lemmings were driven to the cliff, and any normalization of interest rates not only creates capital losses, but most importantly demonstrates two things: first, that liquidity is not a matter of monetary base but rather a matter of collateral availability and second, that central banks are not immune from the disease of central planning a.k.a. the march of hubris where minor movements and unrelated events can create a cataclysm of unpredictable behaviors and market outcomes.

Where do we go then from here? I do not deviate from a long-standing position that the fact that we have not cleaned house could eventually unravel the markets and unfold a crisis unlike any other. However, I do not believe that the “stars” have been aligned yet for such an episode (unless a Greek default initiates such alignment given the stakes that the EU has, and the march of follies that has taken place in the EU in the last 12-15 years). Therefore, and based on facts – as described below – I believe that the market may experience an upside both in the US and the EU in the second half of the year.

Here are some of the reasons for the US: The housing and the labor markets are strengthening and will soon observe higher consumer spending. As the figure below shows, housing starts has sustained above the critical level of 450K even during winter months. In addition, as oil prices stabilize capital spending will stabilize too. Moreover abnormalities observed in the first half of the year are disappearing and jobless claims drop, while wage growth rate picks up speed. As those changes take place, doubt is rising over whether the Fed will postpone the rate hike (something it may do gradually and not in consecutive meetings) and may fuel the rally in equities while calming the bond markets. 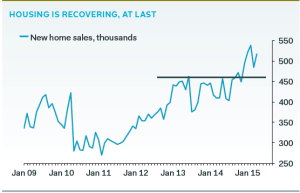 Now, as for the EU, I am of the opinion that despite the embedded dysfunctionalities of the Brussels-based monstrosity, the actions of the ECB (see graph below) will drive the Euro lower (the Fed’s rate hike will also help) while the liquidity provided will advance growth temporarily leading to higher equity values. In addition, the EU may offer opportunities for debt issuance which in turn will boost financial activity and collateral velocity. Hence the financial developments in the EU should help in seeing better activity and returns in the second half. 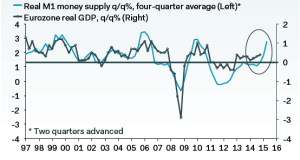 How then should we act regarding our placements? Lemmings migrate in masses. Investors who feel compelled to dance with them should do so. Those who desire to differentiate store value for the winter time when lemmings may choose to migrate to the cliffs where Billy Joel’s song “No Man’s Land” still echo in my ears as central planners outline our collective future: