The last years have seen generally strong economic growth in sub-Saharan Africa, an ‘Africa Rising’ narrative has emerged from parts of the media, and considerable progress has been made against the various UN development targets (see, for example, here and here). The November 2018 publishing of World Bank figures that showed that borrowing by some governments had increased rapidly and led to 40 percent of countries in Africa being at risk of falling into debt distress, therefore came as something of a rude awakening.

International Monetary Fund figures illustrate the levels of debt that have been taken on in recent years. The IMF reports that Burundi has gone from having central government debt of just over 25 percent of gross domestic product (GDP) in 2009 to almost 65 percent predicted for 2019. Zambia has gone from just over 20 percent to over 77 percent in the same timeframe, while Mozambique has increased from under 42 percent to over 118 percent.  The World Bank’s International Debt Statistics for 2019 provide further insight into this, showing worryingly high levels of short-term debt in a number of countries, including Zimbabwe and Eswantini (the former Swaziland).  The graphs below show some of the countries where debt has most substantially increased. (It should be noted that the causes behind this do vary with Sierra Leone, for example, being heavily affected by the West Africa ebola outbreak between 2014-16).

In a way, so far so normal. The warnings of emerging market countries loading up on debt since the substantial cuts to global interest rates after the global financial crisis in 2008 have been sounded loudly before.

One of the aspects that is interesting, however, is how the increases in debt levels – in many cases a useful proxy for increased government spending – show little correlation with progress in the Worldwide Governance Indicators, which are available from the World Bank. The WGI are a research dataset summarizing the views on the quality of governance provided by a large number of enterprise, citizen and expert survey respondents in industrial and developing countries. These data are gathered from a number of survey institutes, think tanks, non-governmental organizations, international organizations, and private sector firms. 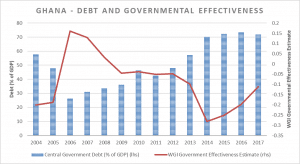