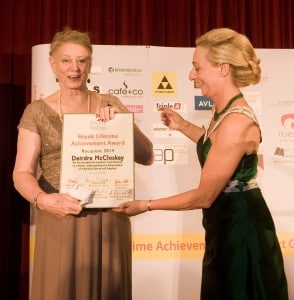 In accepting her award, McCloskey praised the Austrian School of Economics and explained her introduction to the field. “As soon as I understood Economics, I became, in essence, an Austrian Economist. Before I even knew much about it, I understood that markets work without centralised erection, and they work through the cooperation of millions [of people]”.

McCloskey began her career in academia as an assistant professor of Economics at the University of Chicago, where she stayed for 12 years. McCloskey has since gone on to contribute to over 400 scholarly works and texts, including her recent trilogy The Bourgeois Era, which provides an engaging and highly persuasive argument for the existence of ‘ethical capitalism’.

McCloskey’s works have been highly influential in a range of social and political issues, particularly in the areas of feminist economics and her contribution to the cliometric revolution in economic history. Her memoir, Crossing: A Memoir, was awarded the New York Times Notable Book of the Year, and she has also been a strong advocate for feminist causes and rights of the LGBT community.

“Free and dignified people, if left alone, are fantastically creative. This we know from our history. We know that ordinary people, not the elite, not the experts…are the source of our advance. That discovery, that Adam Smith saw in the 18th Century, is what we honour in the Austrian School of Economics”.

Pictures of the event can be found here.

The views expressed on AustrianCenter.com are not necessarily those of the Austrian Economics Center.
hayek_admin2019-01-14T06:09:32+01:00