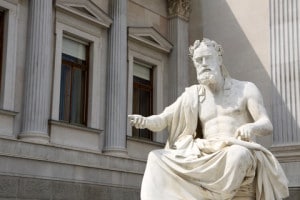 Thought of the Day

The number of democracies has been declining for eight years, according to Freedom House’s country-by-country annual survey of political rights and civil liberties. In 2000, according to the recent issue of The Economist, 120 of the world’s 190 countries were classified as democracies. By 2013, that number had dropped to 86. What’s going on?

Those 86 countries deemed free represent 45% of the world’s countries, which is better than the 25% that was the case in 1975. At that time, however, there was a central ideological challenge, in the form of Soviet communism. The Soviet Union was looked upon by many, including some in the U.S., as a formidable and competitive foe. It was only after its collapse in 1989 that the world saw acceleration in the upward trajectory of democratic states.

Democracies are not perfect. Churchill once famously said something to the effect that a democracy is the worst form of government ever created, except for all others. Government should ensure that the sick, poor and elderly are looked after. But that cannot be their sole or even their principal role. If that happens, a democracy will morph into totalitarianism. The principal role of government is to provide safety to its citizens and their property, at home and abroad. It is to protect the inherent rights of people, including the right to own property; it must establish and maintain a fair and balanced judicial system, with clearly understood laws. It must ensure that children are provided a decent education and that all citizens have an equal opportunity to succeed based on their individual abilities and aspirations. Democracies require the attention and participation of its citizens, and they demand a sense of responsibility on the part of the people.

“Democracy cannot succeed,” Franklin Roosevelt once said, “unless those who express their choice are prepared to choose wisely. The real safeguard of democracy, then, is education.” That is a major part of our problem. Recent surveys show that half of American adults cannot name the three branches of government, yet more than half could identify judges on American Idol. Even worse, the Huffington Post noted three years ago that 49% of elected officials could not name the three branches of government. College administrators speak of the numbers of entering freshmen who must take remedial courses in English and math. The education gap in the U.S. is far riskier to democracy than any gaps in wealth and income. The charter school clash in New York and the President’s refusal to support vouchers in Washington, D.C. have serious and negative consequences for the future of democracy. Teacher union’s leaders have a lot to answer for, as do politicians who worship before the altar of public-sector union money.

Democracies are hard to establish and even harder to maintain. John Adams once prophesied that there never was a democracy “that did not commit suicide.” While we have not taken such a drastic measure, we seem to be providing our leaders the means. The President and the executive branch, over the past few decades, have assumed ever greater powers. We ask courts to rule on issues that would be more democratically decided by referendum or by Constitutional convention. Members of Congress are more interested in serving their personal or Party needs than the wishes of the people. We are an English speaking country where all government business is conducted in English, yet there is no requirement that an understanding of English be required to vote. Does that satisfy FDR’s requirement? Officials like Mayor de Blasio want to provide ID cards to residents for all purposes except voting. Washington and many state capitals would be seen as theaters of the absurd were it not for serious ramifications of what they have wrought.

Besides providing more individual freedom, democracies are richer than non-democracies; they are less likely to initiate wars; wealth and income gaps are considerably narrower, and they have a better record of fighting corruption. Why is the world moving away from what is fair, sensible and obvious?

In last Wednesday’s Financial Times, Martin Wolf, wrote a piece: “There is no easy path to democracy.” In it he noted that democracies need “guardians,” to protect the “notion of the commonweal” – the welfare of the public. The men and women we elect are fiduciaries, pledged to safeguard the principles of democracy, as laid out by the founders of our republic; they are the people to whom we have entrusted the funds that the citizens of our republic have contributed in the form of taxes. Arrogance, and the sense of entitlement it brings, has caused elected officials to ignore the very principles they were bound to uphold. They see their jobs as sinecures for life, and tax dollars as free money to dispense as they see fit, typically paying off cronies, as they eye the next election. The United States, the historic paragon of democracy, has become less free. We, the people, have allowed this to happen. Think term limits.

In April 1917, Woodrow Wilson went to Congress to get a Declaration of War against Germany. He wanted, he said, “to make the world safe for democracy.” While I am no historian, I suspect that outside of the U.S., Britain, Canada, Australia and France there were few other democracies, other than possibly Switzerland and some of the Scandinavian countries. Germany and Italy had Chancellors and Prime Ministers respectively, but both had monarchs. China had emperors, as did Japan and Russia had Tsars. Most of Africa was comprised of colonial possessions. There may have been some democracies in Latin America. I don’t know. But there weren’t many. Unfortunately the War did not make the world safe, in any fashion. Hopes of freedom in newly carved out states from the German and Ottoman empires proved ephemeral. In fact, the War gave rise to Communism, Fascism and Nazism. By 1941 there were only 11 democracies left. It wasn’t until the conclusion of the Second World War that democracies began to blossom; and the successful ones did so with American help. Ironically, the two most successful post-War democracies were our two principal enemies – Germany and Japan. But democracy took years to take root in both, and it did so largely because of the American occupation. Japan’s Constitution, for example, was largely drafted by American lawyers, which took two years to accomplish. General MacArthur did not leave Japan until April 1951, almost six years after the surrender.

The point is it takes time for a democracy to become established where none existed before. Iraq, for example, never had a shot at becoming a democracy. We gave up too soon. Whether or not one agreed with the premise for the Iraq invasion in 2003, the “surge” in early 2007 changed a war that had been lost into a victory. Credit goes to General David Petraeus who turned around the war. It was, as Victor Davis Hanson writes in Saviour Generals, “a stunning reversal.” But less than a year after victory, President Obama, claiming “Bush’s war” had been “a war of choice” and therefore a bad war, announced that troops would be pulled out. The Iraqis were never given a chance to create a democracy. Seeds of democracy cannot be scattered and expected to bear fruit untended. They must be watered, fertilized and cultivated, all of which takes time, patience and expense.

The Economist, in a six-page section last week “What’s gone wrong with democracy,” cited the financial crisis of 2008 and the rise of China, as two explanations for its decline. The idea that the financial crisis was a cause is absurd; though it did create opportunity for the central government to seize more power. There is an argument among many that China’s Communist Party, with its government control over economic output, has outdone the West’s capitalist model. If the statistics China publishes are to be believed, their standard of living has doubled every decade for the past 30 years. Nevertheless, they have a long way to go. According to the CIA World Fact Book, GDP per capita in China is less than one-fifth ours. If one thinks wealth and income gaps are too high in the U.S. they are far worse in China. Wealth in China belongs almost exclusively to members of the Communist Party, which includes only about 7% of their population.

Aristotle allegedly said: “Republics decline into democracies and democracies degenerate into despotism.” We began with a republic. The story may be apocryphal, but its message is not. Benjamin Franklin, upon leaving Liberty Hall in Philadelphia in September of 1787, was supposedly accosted by a woman who asked him what had been created, a republic or a monarchy? “A republic, if you can keep it,” was his response.

A republic, according to James Madison, in Federalist 10, is distinguished by having the running of government delegated to an elected few. Madison noted that the number of representatives must be numerous enough to guard against “the cabals of the few,” yet be limited to guard aga