Dodd-Frank – Bounty for Lawyers, A Bane for the Economy 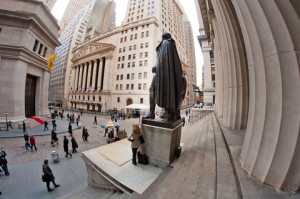 It was four years ago this month, that the President signed the Wall Street Reform and Consumer Protection Act, better known as Dodd-Frank. Wall Street doesn’t appear particularly reformed and consumers remain at risk, now more from predatory politicians than overly aggressive bankers. Worse, the bill never addressed the role played by politicians, or the part played by Fannie Mae and Freddie Mac in forcing a lowering of mortgage underwriting standards, in order to meet government housing policies. It ignores the maxim that the threat of financial loss, including bankruptcy, remains the best retardant against reckless behavior.

More accurately, the bill is known as the “Lawyers’ and Consultants’ [read, lobbyists] Full Employment Act of 2010.” At 2,300 pages, with another estimated 14,000 pages of regulation, the bill created a maze for banks’ compliance departments and a boon for the lawyers necessary to guide the banks through its over-reaching tentacles. NPR reporter Gary Rivlin wrote that the financial industry has spent more than $1 billion on hundreds of lobbyists trying to chip away at the bill’s regulations. Patrick McHenry of CNN estimates that Dodd-Frank has imposed $21.8 billion in compliance costs and its regulations require 60 million hours of paper work. A single example of the latter was pointed out by Peter Wallinson a few days ago in the Wall Street Journal: J.P. Morgan Chase plans to hire 3,000 more compliance officers this year, to supplement the 7,000 added last year. At the same time, they announced the firing of 5,000 people – a swap of the non-productive for the productive.

The purpose of the legislation was to promote the financial stability of the United States by improving accountability and transparency, two traits disagreeable to lawyers who prefer chaos to simplicity and obfuscation to clarity. It was supposed to protect the American taxpayer by ending bailouts for banks “too big to fail, and it was designed to protect consumers from abusive financial practices and products.

Has it accomplished these goals? Financially, the U.S. is more stable, at least for the moment. But that may simply be a natural and rational reaction of businesses and people who have had a near-death experience. The near-collapse of the financial system in 2008 was enough, as we used to say in New Hampshire, to scare the “bejesus” out of one. It would have been odd if borrowers and lenders had not become more cautious. I suspect they still are. Keep in mind, a near-collapse of an entire financial system is extremely rare. Regardless, consumer debt remains a problem. A recent study by the Urban Institute suggests that one in three adults with a credit history – 77 million people – are so far behind in their debt payments that their accounts are now “in collections.” As the French would say, plus ça change, plus la meme chose.

But to return to the questions at hand: Are bankers now held more accountable than they had been? Chief executives have always been accountable to shareholders by way of the directors who represent their interests, but surely that was not the intent of legislators in creating this leviathan. The heads of the banks have been asked to testify and made to squirm; in some cases, they have been vilified in the press. But none of the CEOs of big banks went to jail, nor did the heads of Fannie Mae or Freddie Mac, nor any politicians. Financially, bankers have not suffered. Fines were imposed, but they were paid out of shareholders’ funds – individuals and institutions whose only offense was to own shares. (As an aside, it should not be forgotten that equity holders stand last in line when it comes to bankruptcy. It is the risk they assume for the opportunity to realize outsize gains.) However, politicians who created the environment that allowed these transgressions got away scot free. In fact, two of those responsible for the cataclysmic events of 2008 have had their names embedded in the bill’s more common name – former Connecticut Senator Christopher Dodd and former Massachusetts Representative Barney Frank. The simple answer to the question: there has been no accountability. As for transparency, the size and complexity of Dodd-Frank assures that opacity will persist, which is likely what many parties wanted.

As Mr. McHenry of CNN (quoted above) noted, the costs imposed by the enormous complexity of the bill’s regulations can be devastating to small community banks. The consequence has been a shrinking number of banks and an increase in the size of the nation’s largest banks. There are 300 fewer banks today than there had been in 2008; though that is the continuation of a trend that has been on-going for several years. At the same time, big banks have become bigger. The four largest banks, as of a year ago, held $7.8 trillion in assets, or 47% of U.S. GDP. Six years ago, the four largest banks held $6.4 trillion, or 43% of U.S. GDP. The nation’s largest bank, J.P. Morgan, has assets that are ten times larger than the tenth largest bank, US Bancorp. Size alone does not make banks riskier, but their debt costs imply that lenders assume they will again be back-stopped by the federal government. And easy money breeds frisky bankers.

It is true that the Volcker Rule will prevent (or make more difficult) big deposit-taking banks from engaging in the type of speculative trading that can precipitate big losses. Though, it should be remembered that Bruno Iksil’s antics at J.P. Morgan Chase occurred two years after Dodd-Frank was signed. Capital requirements have been increased, but, according to Bloomberg, a recent New York University study estimates that the six largest banks are “almost $300 billion short of the capital they would need to survive a severe crisis.”

The Consumer Financial Protection Bureau (CFPB) was set up by Dodd-Frank to be funded directly by the Federal Reserve. “This,” according to the Journal’s Mr. Wallinson, “is a clear evasion of the constitutional structure in which Congress appropriates funds for executive-branch operations.” Adhering to the Constitution does not rank as a top priority with this Administration, but is the consumer safer? The answer is, we don’t know. The agency has gone from 970 employees in 2012 to 1,335 in 2013, with a budget of $518 million, three times its size two years ago. While all of us would like to protect every consumer from every charlatan, the job is impossible. Con artists come in every guise, from smooth-talking hucksters to priests to politicians. (State lotteries play to the human characteristic that man is always looking for big returns on small investments.) Experience and a skeptical mind are the best defense. At any rate, we don’t have the manpower, or the willingness, to enforce laws already on the books.

Would, for example, the CFPB have protected a low-income borrower with little prospect of repaying his or her mortgage from Congressman Barney Frank, who had been demanding that banks make such loans? Would it have deprived a low-income borrower from taking out a payday loan – albeit at a high rate of interest, but the only loan available? The Washington Post claims that the CFPB’s consumer complaint process “has already made banks more responsive.” But, in fairness, it is too early to say whether the consumer will be better off. We do know that public sector unions will be enhanced, as the staff voted to join the National Treasury Employees Union, an indication that the agency’s employees were skeptical of their employers.

Politicians, like most of us, inevitably address the causes of the last war. Financial meltdowns, like any crisis, definitionally occur because of the unexpected. While taking precautions is sensible, being prepared for every eventuality is impossible. Not even government is omniscient, though many who work in its bureaucracies believe they are. Emphasis placed on character development at home and in schools would be more fruitful than trying to anticipate everything that could possibly go wrong. People of character tend not to engage in activities that lead to disaster. Simplicity in legislation is preferable to complexity. The Glass-Steagall Act of 1933 consumed only 37 pages, and even the 2002 Sarbanes-Oxley bill is only 66 pages long. In contrast, Dodd-Frank is 70 times longer than the Act that established the Federal Reserve in 1913.

The bill never addressed the root causes of the meltdown, which had more to do with government policies to foster affordable housing for low-income and minority borrowers. It was passed in a rush, so that sole blame for the crisis could be placed on Wall Street. This was to be the “new, New Deal,” in the words of Barney Frank. However, nothing good comes from laws that get passed unilaterally, as this one did, without one Republican vote in the House, and only three in the Senate. I am not one who believes banks need no regulation. They do, as do many aspects of our everyday lives. But rules should be written in understandable English and be simple to implement. Violators should be promptly brought to trial and, if found guilty, punished. If a bill has to be passed in order to understand what’s in it, like ObamaCare, inevitably it will prove to be an expensive disaster.

Dodd-Frank is so long and so complex that as of July 18 only 208 of 398 regulations required by the Act had been finalized. More than 45% of Congressional deadlines had been missed. It was inferred that the bill would address all the factors that led to the meltdown, but that was not so. Banks certainly played a role, but so did many consumers who let the possibility of wealth dictate behavior, and it glossed over government that had set the table.

The bill regulates all types of minutiae, including such unrelated activities as corporate uses of tungsten from the Congo. It vastly enlarges the size of government. It was a bill designed by lawyers, passed by lawyers, to be administered by lawyers. It will keep them and their offspring employed for generations and will swell courts’ alr