When a woman or man achieves a Nobel, it is a win for an elite individual. Obamacare, especially Section 1233, is an example of elitism – government knows best. The presentation of a dozen “participation” certificates to middle school soccer players, in place of an MVP award, represents victory for equality. The word elitist or elitism takes on different connotations, depending on who is speaking.

In “The Roads to Modernity: The British, French and American Enlightenments,” Gertrude Himmelfarb critiqued the French model as anti-religious and scornful of the common man – elitist, in short.

In contrast, Ms. Himmelfarb found that Adam Smith and Edmund Burke had respect for established institutions. For them, toleration and religious freedom were essential to a free society and that a “natural equality” existed between people. They were non-elitist, at least in behavior. Rousseau, Voltaire, Smith and Burke could all claim to be elites by dint of their abilities, but their treatment of people were different.

Elites are natural and inevitable in all societies. The word ‘elite’ is defined as meaning the best because of an innate talent – intellectually, physically or morally. We have elites in all fields –doctors, engineers, scientists and artists. When schools offer gifted programs they acknowledge elite scholars. Trophies presented to elite athletes represent recognition of the best in their field. Businesses often run contests to get the best out of their sales people. For any society to succeed it must encourage the development and promotion of the best and the brightest. But when schools and colleges eliminate class rankings and grades, they are playing to the forces of equality. Washington’s arrogant powerbrokers and politicians have given the term elitist a bad name. Together, they have created an unprecedented level of cronyism, which serves small groups – wealth to the one, power to the other – elitists all.

It is when the media ascribes to ‘elites’ talents beyond their expertise that we slip into a netherworld. In political and sociological theory, elites can be described as a small group of people who control a disproportionate amount of power and wealth. Meritocracy breeds a natural flow of elites, but privilege, position and connections can create fraudulent versions. Unfortunately that happens too often, especially in the political realm. It was concern of elitism that once led William Buckley – elite by almost any definition – to once state: “I would rather be governed by the first 2000 names in the Boston telephone directory than by the faculty at Harvard.” But, as a Conservative Party candidate for Mayor of New York in 1965, Mr. Buckley acknowledged his limitations. When asked what he would do if he were to win, he responded, “I would demand a recount.” He was elite, but not elitist. Unfortunately, such humor and/or humility are nonexistent among Potomac poltroons.

President Reagan was an elite by perforce of his understanding of the principles of Hayekian economics, but not elitist in attitude. Jeffrey Bell argued in his 1992 book, “Populism and Elitism” that Mr. Reagan was the most populous President since Andrew Jackson. In contrast, President Obama is a self-described egalitarian, yet because of his argument that “Big Brother” government is a force for good, his multiculturalism and his refusal to call an Islamic terrorist an Islamic terrorist he is among the most elitist of all Presidents. Maureen Dowd, in Wednesday’s New York Times, quoted Jonathon Alter author of “The Center Holds,” a generally flattering book about Mr. Obama: “What is it about Obama that he so disdains us?” When leaders “know” what is right for the people they govern, they are elitist. Cult-like followers and demonizing opponents often characterize such people. Consider C.S. Lewis’ description of the master demon Screwtape, in “The Screwtape Letters.” Mr. Lewis’ character describes the tendency of elitists for “belittling anything that concerns the great mass of their fellow men.” Mr. Lewis appears to have anticipated those like Kathleen Sebelius, Nancy Pelosi and Eric Holder.

With global economic weakness persisting for five years, governments around the world – from the U.S. to Japan, and from the U.K. to Europe – have called upon central bankers to do the lifting that free markets could do better. Can four central bankers return normalcy to world economies? It is an elitist attitude suggesting governments know best. Would not the world have recovered more quickly if regulations were eased, taxes simplified and free trade more encouraged? Unfortunately allowing markets to work is unlikely because, as Thomas Sowell recently titled a column, “Public Servants have Become Public Masters.”

Equality is a state of being equal, in value, rank and ability. The foundation of our democratic republic is based on the concept of equality before the law, and that our rights, which are God given, cannot be taken without due process. Further, we believe in the concept that we should all have equal opportunities. But, is that realistic? Consider the different paths followed by Stephen Breyer and Clarence Thomas – one the son of a middle class Jewish family in San Francisco, the other the son of a sharecropper and domestic servant in rural Georgia. Both made it to the Supreme Court, but differences in their early childhood circumstances did not provide equal opportunities. People are born into different circumstances. Does the fifteen-year from Harlem have the same opportunity as a similarly aged teenager from Greenwich? Egalitarianism gets into real trouble when politicians promise equalities in outcome. The gap between rich and poor has elevated debate on the issue. But promises of equal outcomes are canards. Socialism promises such outcomes, yet history has shown that under central planning poverty increases and wealth discrepancies increase. The imperialism of pre-revolutionary China’s emperors were replaced with an equally imperial Communist Party organization. The difference is that the latter group killed more people. It is aspiration, talent, desire and brains that are determining factors. In any political society, no two people are the same. It is our differences that distinguish our outcomes.

By definition, all Presidents are elites. But not all Presidents act in an elitist manner. Equality is the promise of elitists. It provides cover for their grab for more power. Populism is their means; power is their goal. Alvino-Mario Fantini, Secretary General of the Hayek Institute in Vienna and a Dartmouth classmate of my son’s, recently put it this way in an op-ed written for the European version of the Wall Street Journal: “…in the West, public debate has shifted from the problem of poverty to the challenge of inequality.” Mr. Fantini then turned cautionary, noting that “…calls for ‘social justice’ can be a dangerous invitation for political leaders to intervene in an economy.” And then warned: “The last hundred years provided the world’s laboratory that nearly 100 million people died in the 20th Century under various political regimes that sought economic leveling.” The truth is that the elimination of inequality is a worthy goal, but, like Stuart Little’s search for Margalo, it is a quest without end. The question is: are reductions in poverty (and thereby, inequality) more likely to be achieved through statism, or the private sector? History suggests the latter. Government should set the rules and referee the game, but it should not be a player.

Navigating the shoals of elitism and equality is the role of free and democratic societies. The flexibility of free markets to adjust to changing needs is a consequence of millions of decisions made continuously by consumers and businesses, whereas central planning creates rigidity. But no system is a panacea. We must accept that there are no perfect solutions to inequalities. Non-elitists in Washington would have focused on jobs, not gays in the military, guns or climate change. We are five years into an economic recovery and job creation has been abysmal. That should be the focus of the Administration. Competition and free markets have proven to be far more efficient than bureaucrats, be they in Washington, Brussels or Beijing. While the best and the brightest are necessary to the efficient functioning of government, business and the arts, elitism and egalitarianism should play no role – the first because it is symptomatic of an attitude inimical to a free people and the second because its promises are duplicitous. 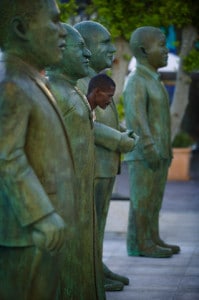 The views expressed on AustrianCenter.com are not necessarily those of the Austrian Economics Center.
hayek_admin2019-01-14T06:46:14+01:00