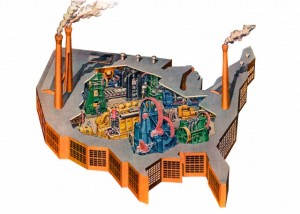 While there are signs of gradual improvement, America’s economy remains in a funk. On Thursday, first quarter GDP was revised down slightly from 2.5% to 2.4%. While the BLS (Bureau of Labor Statistics) puts official unemployment at 7.5%, Gallup’s daily U.S. employment survey indicates that as of May 28 unemployment was 8% and underemployment was a staggering 18.2%. If the labor participation rate were the same it had been when the downturn began, unemployment would be 11.5%, according to a May 10 study by Goldman Sachs. Jobless claims rose unexpectedly last week to 354,000.

In the first quarter of 2013, corporate earnings, according to the Bureau of Economic Analysis, declined 1.9%. And that was with the nation’s largest banks recording record earnings, up 15.8% versus a year ago. On the other side of the ledger, May marked the sixth month of positive returns to stocks. Does the right hand know what the left hand is doing?

We are five years into recovery and the only thing that seems to be working is monetary policy – the Fed’s leaning on interest rates. Low interest rates have helped asset prices and the housing industry, and it has allowed large banks to make billions, but have done very little to encourage lending to consumers (apart from student loans) and small and midsize businesses. Low interest rates have, of course, lowered the value of the dollar, thereby aiding exports. Positive fiscal policy has been nonexistent. Instead, increases in taxes and regulation have created uncertainty, which have had negative impacts on confidence. Monetarists understand Milton Friedman’s admonition that inflation is always and everywhere a consequence of growth in the money supply. Nevertheless, despite an increase in money supply, inflation remains subdued. One explanation has been the desire of consumers to reduce leverage; a second has been a $1.8 trillion increase in the excess reserves of banks. But never mind; inevitably, the increase in money supply will lead to inflation.

The consequence of all this has been a sluggish economic recovery, with unemployment remaining stubbornly high. One of the bigger exceptions has been metropolitan Washington. (See last Saturday’s Wall Street Journal): “What Sequester? Washington Booms, As a New Gilded Age Takes Root.”) Not coincidentally, four of the five states with the lowest unemployment – North Dakota, South Dakota, Utah and Nebraska are right to work states. Vermont is the other. And the Dakotas have enjoyed the fruits of an oil and gas boom.

The Administration’s persistent mantra has been that this has been the worst economic downturn since the great Depression. In terms of a decline in GDP that is true, but it is factually untrue, if one measures downturns in terms of unemployment. In the early 1980s, unemployment reached 10.8% and remained above 10% for several months, before declining to 7.5% in 1984 and 5.5% in 1988. If only that were the case today! Also, it should not be forgotten that the credit crisis, which accelerated the downturn, was already beginning to recover when Mr. Obama took office.

What makes this laconic recovery seem so unnecessary is the revolution in energy. In spite of little or no help from Washington, the sector has been on a tear. In December, U.S. oil exports hit 3.6 million bpd – a record. In 2012, domestic natural gas production averaged 69 billion cubic feet per day – a record. And last year U.S. oil production rose by 790,000 bpd to 6.5 million barrels per day, the largest increase since oil was first produced in 1859 – so also a record. In his recent book “Comeback,” Charles Morris estimates that hydraulic fracturing of shale  has added 1.7 million jobs since 2008. Putting that number in perspective, data from the Bureau of Labor Statistics (BLS) shows total employment in 2008 at 146.3 million, while total employment in April 2013 was 2.7 million fewer, at 143.6 million. The immediate problem the country faces is not gays or sex assaults in the military; it is not climate change, nor is it closing Guantanamo; it is not guns. The immediate problem we face is a lack of jobs.

Fear of “peak oil” has been around since the 1920s. In 2005, ExxonMobil’s combative CEO Lee Raymond declared: “Gas production has peaked in North America.” The reasons such Cassandra’s have been proven wrong, according to Robert Bryce, a senior fellow at the Manhattan Institute, is due to a convergence of myriad technologies – better drill rigs and bits, fracking, horizontal and deep water drilling, robotic rigs and nanotechnology. These techniques have combined to convert a “wildcat” industry into one that is “more akin to the precision manufacturing that dominates aerospace and automobiles.” Technology has allowed producers to extract oil from places previously considered inaccessible, and to do so with less environmental impact.

America could become a net exporter of oil and gas within the decade, should it be allowed, most experts agree. But the Administration has moved cautiously. The EPA has been slow to approve fracking on federal lands. In 2011, drilling on federal lands was down 11% from 2010. Mr. Obama has still not approved the XL Pipeline. According to Real Clear Energy, a 1975 law prevents the exporting of crude oil. While refining capacity is almost triple that of oil production, those dynamics are changing. Mark Mills of Real Clear Energy notes that increases in oil production have grown far in excess of increases in domestic refining capacity, creating a situation where “oil in the heartland sells up to $40 below world prices, but cannot be exported to willing buyers.” There have even been concerns expressed by the New York Times and Foreign Affairs that cheaper U.S. crude could upset the economies of crude exporters like Russia, Nigeria, Venezuela and the Middle East – an odd charge at a time when these countries are not our closest allies and our economy remains moribund.

The economics in natural gas are even more compelling, with gas selling in the U.S. for a fraction of what it sells for in Asia and Europe. Natural gas has traditionally been a domestic market, as gas is volatile and transporting it can be dangerous. Liquefying gas via a freezing process allows it to be shipped safely. Once delivered, the gas can be vaporized through a warming process called re-gasification and piped to customers. However, the permitting process for Liquefied Natural Gas (LNG) plants is slow, laborious and costly. Thus, despite a discrepancy in pricing that has the Japanese paying almost three and a half times U.S. prices, American LNG shipments to Japan declined in the past year. Consequently, there has been a reduction in U.S. production.

Increased energy production is an obvious answer to the country’s need for jobs. According to a recent report from The Boston Company, entitled “End of an Era: The Death of Peak Oil,” supply in North America has grown annually by 500,000 bpd and demand has shrunk by similar levels. With more oil being discovered in regions as diverse as Brazil, North Africa and the North Sea, supply should more than offset rising demand from emerging nations. In the U.S., increased and increasing supplies should afford American manufacturing cost advantages in terms of exports.  Discouraging deep-well, offshore exploration, fracking on federal lands, drilling in places like ANWR (Alaskan National Wildlife Refuge), and disallowing the Keystone XL Pipeline are acts that may satisfy a few radicalized environmentalists, but ignore the greater need of society. Because of technology, the impact of drilling on the environment is far less than it had been. An emphasis on renewables is laudatory, but makes little sense when employment is so low and the economy so weak. Despite expanding energy reserves, oil imports, according to a recent policy report by Mark Mills of the Manhattan Institute, accounted for 40% of our $750 billion annual trade deficit. Certainly, spending research dollars on renewables is worth undertaking, something DARPA (Defense Advanced Research Projects Agency) might conduct. That makes a lot more sense than giving taxpayer money to the Administration’s crony friends in the wind and solar industries.

Unemployment in California is 150 basis points above the national average. The reasons: high taxes, no right-to-work laws and regressive regulation. Yet California sits atop 64% of America’s shale oil. The Monterey shale formation is estimated to hold 15 billion barrels, about four times the size of the Bakken Field in North Dakota. There are obstacles beyond environmentalists. Sunday’s New York Times ran an article highlighting disputes between farmers in Monterey County and shale drillers. Nevertheless, the Issues and Insights column of Saturday’s Investor’s Business Daily summarized the issue well: “North Dakota’s miracle is no miracle at all, but the harvest of a decision to employ fracking to squeeze the crude out of the Bakken shale. It is the sort of decision that could save California from its lethargic economy and heavy government debt.”

Three problems – unemployment, persistent dependency on foreign crude, and trade deficits – all could be solved by exploiting the natural resources t