Enlightenment in the Era of Central Banking: Fearing the Normal or Normalizing Fear?

The flowering of the Enlightenment across Europe in the 17th and 18th centuries took place when a diverse group of thinkers questioned perceived opinion. The names of Descartes, Spinoza, Locke, Hobbes, Leibniz, Hume and of many others are associated with free and liberated thinking from the straightjackets of those days including neo-Aristotelian dogmatism. Immanuel Kant summarized the essence of the movement in 1784 by using the motto Sapere aude (dare to know).

The world was in a state of immaturity and that group of radical thinkers used reason to awaken the awake from that state of immaturity. That awakening was followed by economic and social transformations that completely changed Europe and the globe. Cities and towns changed dramatically. Technological and economic growth brought an era of open-ended development. Industrialization turned rural areas into metropolitan powerhouses. Improved medicine advanced the quality and length of life while cutting the impact of epidemics. Wars were relatively short-lived and contained within a region. Steam power and electrical engineering freed societies from the limitations of human strength.

At the same time infrastructure was built and as roads, canals, and railways were expanded, mobility was advanced and with that trade among nations. Of course, at the core of all these developments was also the spread of education and more democracy. Having said it does not mean that we should absolve that era from its dark pages.

What does the era of Enlightenment have to do with central banking today? First of all, the growth that took place was based on real parameters such as productivity, innovation, capital investments, etc., and not on monetary manipulations. Actually, the monetary thinking of that era was that paper money needed a hard asset anchor so that the chances of financial instability would lessen. Furthermore, and without drawing exact analogies, we would say that the golden growth era in Europe took off at the end of Napoleonic Wars (1815) and ended at the start of World War I (1914) when the ideas of the Enlightenment reached a plateau in terms of economic applications and global cooperation. In a similar manner we reached the 100th anniversary of the most powerful central bank (Fed) just a couple of years ago. Under the leadership of the US central bank some good and some bad events took place that shaped the global economy and financial markets. However, and as Mario Draghi (President of the European central bank) admitted last Thursday, central banking is reaching its limits as to what it can do with its printing machine.

Last Friday, following the rise in fears/expectations regarding higher short-term interest rates, markets experienced significant volatility and dropped. The potential path of rates’ normalization inflicted fear and pain. The central banks around the world have been on an unsustainable unorthodox path for the last decade. The following graph shows what happened to the fear index (VIX) last Friday. 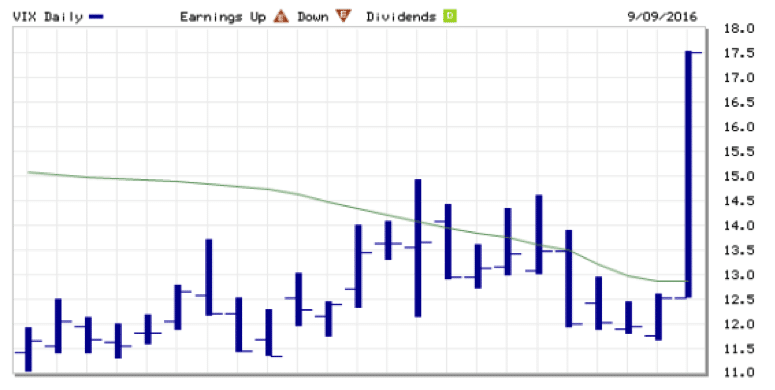 We are of the opinion that investors should not be afraid of interest rate normalization. We rather opt for normalizing our fears. As we explained in our last commentary market complacency due to central banks’ actions (QEs, unorthodox policies as well as the famous/infamous Greenspan and Bernanke puts) has imparted a sense of fear defiance in markets. On top of this there is over-confidence that the moral hazard game of the central banks will continue and actually be expanded. Investors have been left to assume that reasonable irrationality defies market gravity. Hence the market views central banks as omnipotent institutions that have elevated monetary policy to ultimate science.

This is dangerous and that’s why we advocate for a new thinking in monetary policy which will be at least partially anchored not on paper but rather on assets that cannot be printed. That’s is also why we believe in the rationalization of rates and in portfolios that retain a greater portion than normal of cash while also are anchored and hedged.

The views expressed on AustrianCenter.com are not necessarily those of the Austrian Economics Center.
Federico Fernández2019-01-14T05:55:06+01:00