As the EU Expands to the Balkans, Who Will Be Left?

The February 2018 European Commission policy announcement regarding engagement with the Western Balkans – ‘A credible enlargement perspective for and enhanced EU engagement with the Western Balkans’– claimed that the European Union “has long been strongly engaged in the region. From the Thessaloniki European Council in 2003, it has supported the future of the region as an integral part of the EU”. Yet to say that the progress of the EU into the Western Balkans has been glacial until recently probably does a disservice to some glaciers, given the speed with which some have been moving in recent years.

The Commission and its President, Jean-Claude Juncker, suggested that 2025 was a target date for Serbia and Montenegro to join the EU. Barely had this been articulated, however, before EU leaders started to rubbish the possibility. Germany’s Chancellor Merkel, when asked what she thought about the 2025 goal, said: “I don’t think anything of this target date. Membership must be based on factual progress. It’s not about a time horizon, it’s about what’s been achieved…”, while France’s President Macron expressed strong aversion to EU expansion before substantive internal EU reforms. Summing things up, one recent commentary put it that, “on its current trajectory, the region will take decades to join the EU”.

The 2017 Revision of the World Population Prospects by the UN has laid stark the predicted demographic decline of central and eastern European countries, the internal EU aspects of which have previously been addressed on the Austrian Economic Center’s blog.  The situation for the six countries of the Western Balkans – Albania, Bosnia and Hercegovina, Kosovo, Macedonia, Montenegro and Serbia – is scarcely less bleak. Of the six countries in the region, five already have broadly static or falling populations, with only Albania expected to grow (very slightly) before it too starts to experience population decline from the early 2030s. 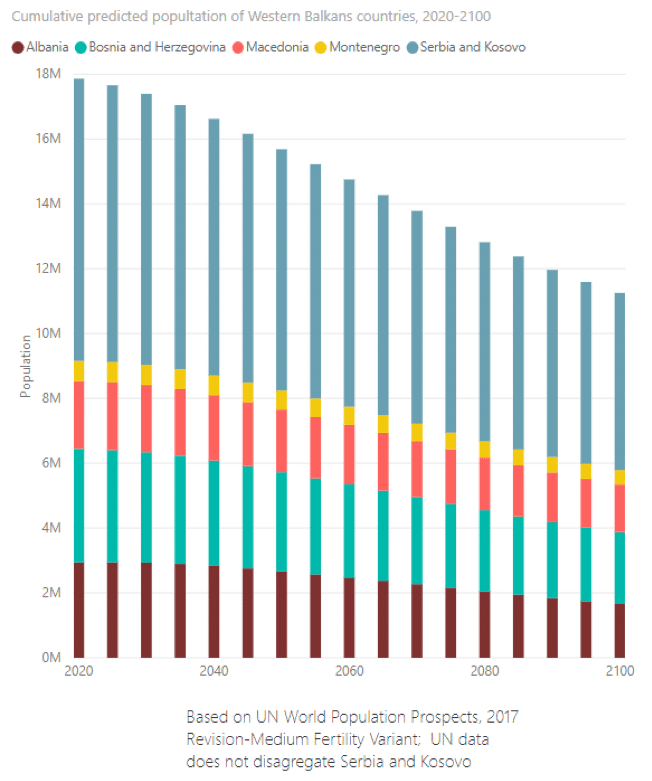 Numerically, the major reductions are predicted to initially be from Bosnia and Herzegovina and from Serbia and Kosovo. Between 2018 and 2035, the population of Bosnia and Herzegovina is expected to shrink by over 165,000 people from 3.504m to 3.336m, and by almost a further 300,000 by 2050. Serbia and Kosovo will jointly go from a current population of 8.762m to 8.144m in 2035, a reduction of over 600,000 people, and then almost a further 700,000 by 2050. Compared to today, even if (optimistically) all six Western Balkans countries were to join the EU by 2035, there would be around 870,000 less people to become EU citizens. The proportionate predicted reductions are shown in the following table.

Of course, these demographic predictions are unlikely to turn out to be totally accurate. The predictions made above are based on data from the UN’s Population Division of the Department of Economic and Social Affairs and use the 2017 assessment’s Medium Fertility Variant growth/decline path. As the UN predications make clear, however, there are a range of possibilities for future population levels, depending on different scenarios – low/high/constant fertility levels, increased/reduced/zero migration, and others. The image below is a snapshot of the forward-looking predictions for Bosnia and Herzegovina that shows the potential range within which the future population level is expected to be by the UN DESA based on the selection of different variables. However, while there is a substantive different within the outliers, what is clear is that the vast majority of predictions are that there will be considerable falls in population level. Similar predictive spreads can be found for the other countries in the Western Balkans. 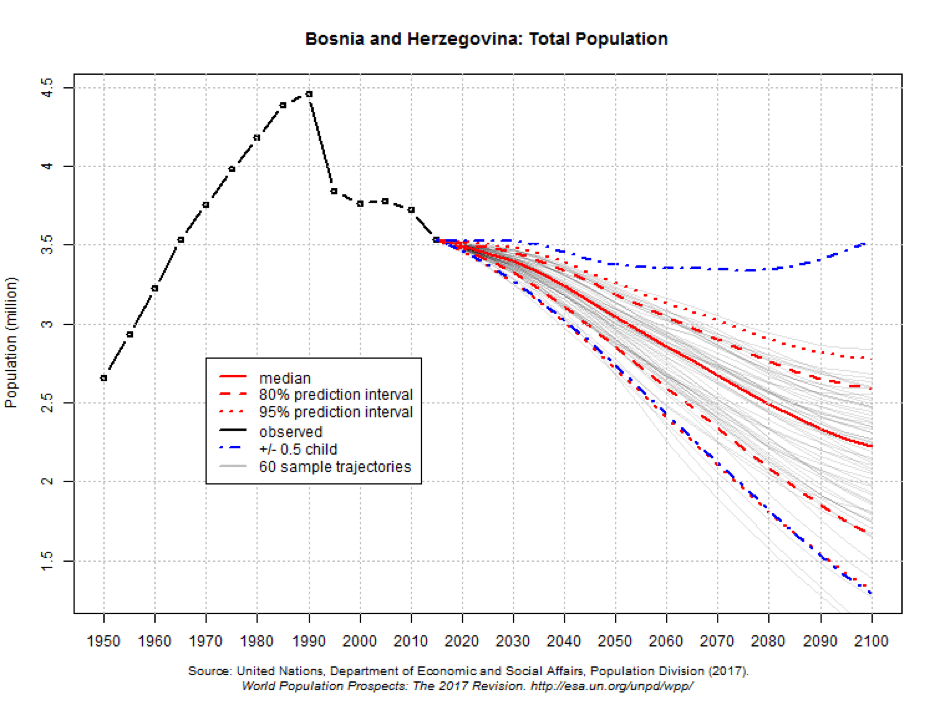